Beware! The forest is infested with Crocaparrots! 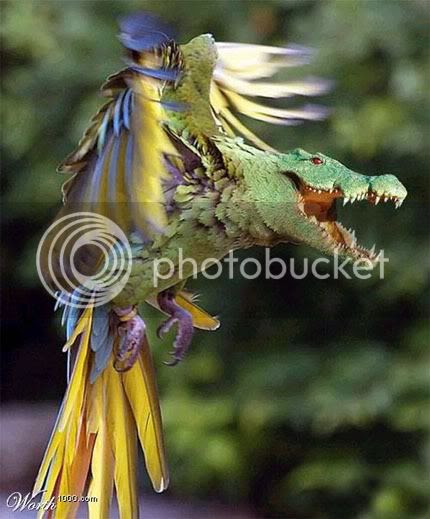 I found this image at Worth 1000, a site devoted to photoshop images. They have theme contests all the time and this was from a make a combined animal contest.
As soon as I saw it I thought, yeah, I'm gonna have to write that up.

The Crocaparrot was created in a jealous pique by a wizard who was envious of the mage responsible for the far better known Owlbear.
Crocaparrots roost in dim tropical and semi-tropical forests near water sources. A flock of hungry crocaparrots will not fear to attack any group of creatures man-sized or smaller which does not greatly outnumber them. They do, of course prefer to go after single creatures alone.

Crocaparrots are not quite as intelligent as a regular parrot, but they do retain the normal parrots ability to mimic other creatures they have heard. They are just smart enough to use this ability to attempt to draw out and separate possible victims from a larger group.

Hidden in the forest canopy, or among the under growth crocaparrots may repeat words or phrases that they have seen people react to in the past. Phrases such as, "Save my baby!", "I've found the treasure!", or " Hey, sailor!".

If characters react to the crocaparrots lure, searching for the source of the voices in the trees, the crocaparrots will mob one or two of them at a time, biting with their powerful jaws. During the attack, the crocaparrots will often repeat the words and cries of previous victims in their high, but gravelly voices. "Rawwwk! What the hell is that?!", " Aahhhhgghh! Get it off me!", "Hey, what happened to the halfling?"
Once a crocaparrot has bitten it's victim, there is a 2 in 6 chance it will hang on instead of letting go. If it does so, it will execute a "flying roll" in the next round, spinning in the air using it's wings and tearing off a chunk of flesh. This will do 1-6 damage for that round.

Should the flock successfully kill it's victim, they will work together to bear the dead creature up into the canopy and wedge it's body in the crotch of a tree. Crocaparrots prefer to let their meat age until it has softened since their teeth do not allow for chewing.
Posted by E.G.Palmer at 6:47 PM

Thank you for the tremendous laugh! I can't wait to use this one.

LOL! Good thing I wasn't drinking anything, because I'm sure whatever it might have been would be all over my monitor right now. :P

Thank you, thank you, I'll be here all evening. Please, try the veal.