Attention Chgowiz! I will squash a fairy every day your blog remains down! I'm not screwing around here man. I mean it. I've got a yard full of the little buggers and I'm not afraid to mash 'em.

Your blog has been an important resource for gaming inspiration, for me, and I'm sure no few others. Please come back to the table and roll some dice. The OSR can't get by with just 136 of us.

Fellow bloggers, I ask for your support in this. Let's all squash fairies for Chgowiz!
Posted by E.G.Palmer at 8:52 PM 8 comments:

The Cephalopisc, or, " 'Ware the flying Fishheads lad!" 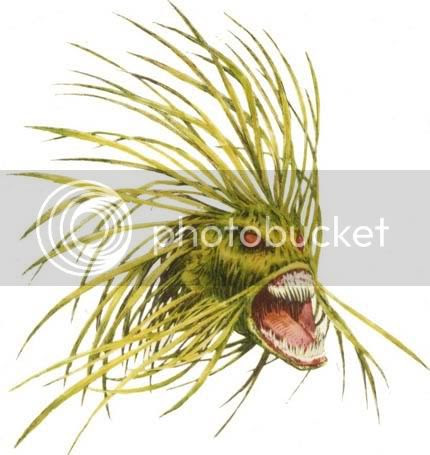 The Cephalopisc
Frequency: Very Rare
No. Appearing: 1-4
Armor Class: 4
Move: 1"(10 feet) on land, 6"(60 feet) underwater
Hit Dice: 2+3
% In Lair: 70%
Treasure Type: Nil
No. of Attacks: 1
Damage/Attacks: 1d4 (bite)
Special Attacks: Transformative Saliva
Special Defenses: nil
Magic Resistance: Standard
Intelligence: Low
Alignment: Neutral Evil
Size: S (3 feet long, 30-40 lbs)
Psionic Ability: Nil
Also called a Reedy Devil, or Flying Fish Head, the Cephalopisc is an ambush predator that some believe may have been created or altered for a specific purpose. The creatures lurk along shore lines in salt or brackish swamps or other bodies of water, blending in amongst the rushes and reeds with their spiny rays and fins.
From their camouflaged hiding places, the creatures call out, mimicking sounds that have attracted attention in the past, such as crying puppies, duck calls, or the bubbling laughter of water nymphs.
When a possible victim comes within 10 feet of the cephalopisc's hiding spot, the monster will hurl itself out of the water, directly at its intended target, and attempt to bite a hunk of flesh out of the hapless creature.
If it succeeds in this first attack, the saliva of the fish head will cause the victim to fall into convulsions for 10 rounds if they fail to Save VS Poison. During this time, if otherwise undefended, the victim is helpless against further biting attacks by the cephalopisc.
The monsters saliva has a further effect. Those who fail their save and experience the convulsions will be transformed into Sahuagin within 24 hours unless they receive the benefits of a Remove Curse.
Those transformed will have no memory of their former life, and will seek the sea as soon as possible.
The belly spines of the cephalopisc are stiff and it can employ them as clumsy, stilt like legs to move about slowly on land for a short time.
-----------------------------
The art is by the great Bernie Wrightson. It's clipped from the center of an all access pass to Meat Loaf's 1981 concert tour. Dig it man. Of course, I got the original scan at Golden Age Comic Book Stories. All hail Mr Door Tree!
It's been a few days since my last post, and that one was just a throw away place holder. I've taken a second job to supplement my income because nobody is buying weird one-off handmade furniture in a planetary depression, go figure eh?
Anyway, I'm sure this will cut into my blog time for the foreseeable future. I'm gonna shoot for two entries a week, but If I don't have something of quality or use to put up, I don't like to post just because. I'm all signal, no noise. Most of the time.
Here is a thought, a non-gaming thought that is. I try and keep this blog on point and not stray into other areas of interest to me, but I've been looking at economics as a hobby for the last six years or so, ever since I became suspicious that it was mostly built on bullshit.
Gamers are sharp tools, generally, so whether or not you've been considering this sort of thing, if I started a blog on our current financial/economic/energy/political situation, aimed at stimulating discussion amongst ourselves, would you fine ladies and gentlemen be interested?
Posted by E.G.Palmer at 7:40 AM 7 comments:

Hmmm, have you guys seen this?

I don't usually visit Something Awful, but I followed a link from Boing Boing, which I enjoy, even though it's clogged with moonbats.

I never know what to make of this sort of commentary about D&D by people outside the active game world. They seem like blathering philistines, but there is some oblique admiration for Gygax.

There are some nice little scans of Original D&D art, so, there's that.