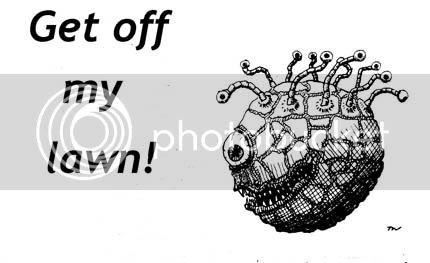 I'm considering making this guy my blog mascot. It always looked to me like he was saying something in the monster manual illustration, and I thought it would be entertaining to put words in his mouth. "Get off my lawn!" was just the first, and most grognardly thing to pop in my head.
I also like , "You're doing it wrong!", and "Kneel to the eye tyrant of fun!"
I'm going to call him Eyegor.

As with the ditch archer from the previous post, I like to twist old monsters to make them unexpected. Especially the old classics that everyone thinks they've got nailed down.

On the island of the mad transmogrophist Uaerom, I had lots of creatures resulting from the wizards attempts to improve on creation. Hybrids, fusion monsters, and what not. This was of course, for Hackmaster, so over the top weirdness is encouraged. I'm going to put up three more of my favorites from that build.

The gelatinous sphere is a nocturnal, surface dwelling version of the more well known gelatinous cube. The sphere is just slightly more intelligent than the cube, and a more active hunter to the cubes roll of scavenger. Nearly transparent, with a slight green tint, the sphere rolls about the forest and countryside at night, looking for both dead and living animal matter.
Though it can be hurt by fire, the gelatinous sphere is not afraid of it. It is dimly aware that easy meals may often be found sleeping peacefully beside a campfire. The sphere makes almost no noise when is slowly rolls out of the night and on top of an unwary camper.
If encountered by an active party, the gelatinous sphere is 100% likely to attack, rolling at it's top speed to chase down and engulf fleeing victims. Those who come in contact with the sphere must save vs paralyzation or be immobilized, and then sucked within to be dissolved.
Unlike the cube, the gelatinous sphere will have a lair. This will be a location mostly hidden from the sun, where it can wait out the day, and digest it's prey.
Before entering it's lair, the sphere will exude a sticky goo and roll about coating itself in leaves, sticks, and debris as camouflage.
While in the lair, any indigestible materials the gelatinous sphere has absorbed during the day, will be expelled. Adventurers stumbling upon a ring of metal objects and gems in a dim wood should be wary. Death may come rolling and bouncing upon them at any moment!
All weapons can damage a sphere. Electricity, fear, holds, paralyzation, polymorph, and sleep based attacks have no effect.

These next two are unique creatures created by Uaerom in his madness. He abandoned them to roam the island, considering them failures.

Guk is a horrific fusion of a man, and a roper. An abomination, Guk stands on hairy, human legs and has human hands on the ends of his six tentacles. He has otherwise the features of a roper, save for a luxuriant head of red hair.
He shouts his name when attacking, "Guk!, I Guk!", and sometimes asks nonsense questions of his victims during the fight.
Guk stands in the opening of his home, a shallow cave, on moonless nights and waits for something edible to venture within reach. (5") When scoring a hit on attack, Guk may , grip, punch, or wuss slap. 1-2/3-4/5-6 on a d6.
Victims who are gripped, will be drawn to his mouth and bitten, or asked a random bizarre question, 50/50 chance for either.
Guk may not be reasoned with or negotiated with, he/it, knows no fear.

Stinkfoot is a blend of halfling, and skunk. He is not that bright, easily startled, but not apparently hostile to strangers. In fact, he will become instantly attached to any group that shows him the least kindness. He is always hungry, and will stick with the party if given food. He will attempt to be helpful in whatever way he can.
Stinkfoot wears backless short pants to allow his tail freedom and is covered in black and white fur. he carries a wood club as a weapon, and can also defend himself by squirting a foul musk like a normal skunk.
Musk cloud, 2" by 2" by 6", save vs poison or lose 50% of strength and dexterity due to nausea for 2-8 turns.
Stinkfoot appears harmless and will likely evoke feelings of benevolent condescension from the party.
He has, however, absolutely no moral compass, and, if left alone with wounded, or otherwise helpless characters, will club them to death and eat them as soon as he becomes hungry.

I thought I'd put up a copy of the beholder without any text, so that you guys can copy it and try out your own sayings. Remember, Eyegor means old school. 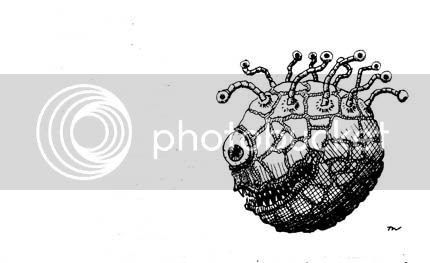 "I'm not only the president of Eye Club for Monsters, I'm also a member"

I have to figure out how to do word ballons in photo shop.