The Scachamma. "It came from the river! Gleorg is devoured! Run fools!" 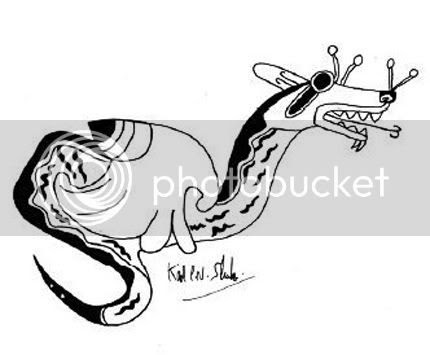 Far from even the dim and guttering flare of enlightenment cast across the Flanaess by the City of Greyhawk, beyond the hidden domain of the Scarlet Brothers, deep within the unmapped expanse of the endless, tangled jungles of unknown Hepmonaland, ancient horrors which would chill the blood of the most hardened slayers glither beneath the steaming emerald canopy.

Those who would venture there do so on the strength of tavern tales and rumors, for little is truly known of such distant places, so far removed from civilized lands.

One such tale fragment comes to us by way of the broken journal of Tilidus the Untoward, procurer of obscurities and late of Rel Astra. During his expedition in search of the nacreous Pearled Falcon, he struck deep into mysterious Hepmonaland.

An entry in that journal, salvaged from the sea, reads in part;

“The sound came upon the evening of the 34th day of the trek into the jungle. We had begun to set up the encampment for the night and gather fuel for the watch fires. From out of the darkness came a long, wailing whistle-like noise followed by four wetly metallic percussions of notable volume, though seemingly of some distance from our campsite.

The effect of this sound upon the savages was salutary. I have never seen such fear in men as was writ across their faces. They stopped in their tracks as though they had instantly become stone. When the sound was repeated a few moments later, they fled into the jungle shrieking, “Scachamma! Scachamma!”

Nahaup is the name these people give to the creatures known to scholars as Su-monsters. That some creature might see such terrible beasts as easy prey amazed me. I asked him what manner of monster this Scachamma might be, and he replied thus.

“Scachamma is as a serpent, but also as is a snail. It carries its home with it when it goes to hunt. It is longer than the tallest tree. It is thicker than the river horse. No thing may fight it; all must run when Scachamma comes. The people throw monkeys into the river to keep Scachamma away. Most times it sleeps under the river. “

He leered at me with his sharp, filed teeth, “The men who are not taken by the jungle will return in the morning. We will speak no more of Scachamma. It may hear and come to see who speaks its name.”

I did not press the shaman further, though I wished to know more of this shelled serpent he claimed was the source of that strange and unoerthly call. I admit that I have begun to fear him and his primitive diablerie. I suspect that Guiligag has motives for aiding in my search for the pearled falcon which have nothing to do with those he has given.

What exactly the Scachamma is cannot be determined definitively from the information available. The monster is in general form serpentine and of gigantic size. Its features are somewhat more amphibian than reptilian. Though scaled, it is also covered in a heavy slime coat which protects it from fire. It also possesses an enormous calcareous shell similar in form to that of a sea snail.

Four whip like tentacles which may strike distances of up to 15 feet protrude from its head in pairs. One projects from either side of its glistening snout, and one each sprouts from above its bulbous orange eyes. Anyone struck by one of these tentacles must Save vs Poison or else take 1d6 damage from the viscous venom which drips from them. This venom causes intense pain and unless the victim saves successfully a second time, memory loss. For every point of damage caused by the venom, the victim will lose one day of memory. This can easily result in a magic-user losing all memorized spells, or other important information being lost.

Far more dangerous than its facial tentacles, however, is the monster’s Maw Vortex. Once every four rounds, the Scachamma can create a tremendous suction that functions as a sort of reverse breath weapon.

Creatures of man size or smaller within the area of effect, (equal in form and range to the breath weapon of an adult red dragon), will be literally sucked into the Scachamma’s mouth if they fail to Save vs Breath Weapon. In the following round they will be bitten for 4d6 points of damage, and in the round after that swallowed, dead or alive. Those swallowed alive may attempt to cut themselves free if devoured with weapon in hand. The creature’s powerful digestive acids will cause 1d8 points of damage per round.

The great weight of the creature’s massive body and that of its shell cause 1d8 points of crushing damage per round to any creature it might overrun. Though the Scachamma is slow, it does not tire. It will relentlessly pursue chosen victims so long as it does not lose sight of them.

Magical attacks employing cold will do full damage and also slow the monster’s movement by 50%.

The vast majority of its time; the creature spends asleep at the bottom of slow moving rivers, or in dark and wooded swamps. Only if disturbed or searching for food will it be encountered on the move.

The monster plays various roles unknowingly in the myths, stories, and religions of the inhabitants of Hepmonaland and parts of the Amedio peninsula. This may indicate that more than one such beast exists, or that the Scachamma is capable of crossing the Tilva Straits. As it has never been sighted at sea, it likely travels across the ocean bottom. The reactions of the indigenous peoples to those who inquire about or seek the Scachamma vary widely.

The Scachamma collects no treasure, though objects which are indigestible may remain within its gut. Some tales attribute magical properties to its shell. One of the small spikes or horns which project from it could bring great wealth if offered to the proper buyer.

• I think the Scachamma would easily fit into a Weird Tales or Sword & Planet type game with minimal modification. I generally run Wyrd Greyhawk as medievalesque-black folk tale, but it becomes steadily weirder the farther from the central flanaess adventurers travel. Hepmonaland becomes quite Lovecraftian and horror pulp.

* This monster was inspired by an entry at ShukerNature, the cryptozoology blog of Karl Shuker concerning the Sachamama, a weird beastie reported in Peru. The art is a redrawing of an image from a 16th century piece of Peruvian pottery depicting said beastie.

I'm an aficionado of all things Fortean, and that pursuit naturally provides more fodder for The Game. Dig it.
Posted by E.G.Palmer at 5:28 PM 5 comments: