The Fighting Friar will beat your Monk senseless! 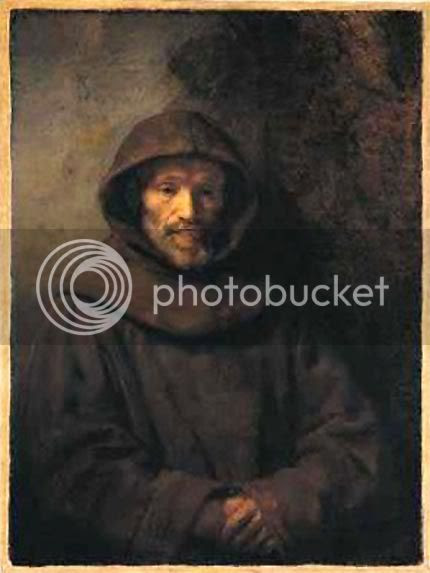 My own Greyhawk campaign is very much Fantastic-Medieval European in theme and tone. With undercurrents of sword & sorcery, and cosmic horror. I’ve never thought the Monk class, as written, was a good fit for it. The Monk grew out of the kung-fu movie fad of the seventies and it never felt to me to have any connection to the other archetypal characters of the game.

I do like the idea of having an class that at least, leans towards unarmed combat though. The Friar is the class I came up with to replace the Monk in my Greyhawk. It is meant to fill the role of unarmed combatant, without the mysticism and eastern philosophical baggage associated with the kung-fu movie derived Monk.

This class is tailored to my own Greyhawk, which is low-magic, and largely lower level adventuring. Tenth level is about the highest any one ever gets. I have open guidelines for hand-to-hand combat, I rely more on common sense than crunch. The worthy Dungeon Master should still have little trouble modifying the Friar to fit his own game world, and is welcome to do so.

The Friar can be considered a subclass of the Cleric, if you like. The Friar is a holy man of a religious order which protects and ministers to the peasantry. Where the Cleric is concerned with exalting his religion and expanding the power of his church foremost, The Friar sees his purpose fulfilled by doing good by the commoners, especially in situations where the local Lords are lax in their duties, or where there is no Law to shield and guide them.

A Friar may not use edged weapons.

The Friar may specialize in the use of two weapons, the fighting gloves, or Caestus, and the Crook-staff, also called simply the Cruk.

Caestus are gloves made of multiple leather straps and studded with knobs of bronze or iron. A Friar wearing fighting gloves adds 2 points of damage to a strike with his hands for every three levels of experience. (+2 dmg at levels 1-3, +4 dmg at levels 4-6, +6 dmg at levels 7 and above.

The Crook-staff is a staff of heavy, close-grained wood, equal to or taller in height than the Friar, which has a bent hook on one end similar to that of a shepherd’s staff. A Cruk may be employed in the manner of a quarter staff, doing the same damage, and it may also be used to hook an opponents leg, arm, or neck. In combat, the Friar must declare an attempt to hook an opponent before rolling to hit. If a successful hit is indicated, the Friar may pull a humanoid opponent off it’s feet, prevent it’s attack next round, or hold it in place for one round per level of experience.

A Friar may use other, blunt weapons, such as those allowed a Cleric, but will always suffer a -2 to hit penalty. The only way this can be avoided is to have the Friar train under a martial Cleric, or a Fighter, and expend 1500 experience points in the training.

A Friar is a specialist in the arts of unarmed combat. The various orders of Friars teach their Brothers, pugilism, wrestling, foot-fighting, and other hand-to-hand fighting methods. Any unarmed attack by a Friar is considered a ,"Strike". This includes kicking, gripping, punching with the closed fist, or the open hand, kneeing, or elbowing, attempts to trip, or knock down an opponent, etc.. All such attacks are rolled normally on the Fighters to hit matrix. All Strikes by a Friar do a base damage of 1-6, plus modifications for strength if applicable.
It is assumed that Friars are taught to deal with armored opponents in training. Directing their Strikes at joints, exposed areas, the face, etc, thus, non-magical armor does not lessen the damage a Friar can inflict.

A Friar’s ability to fight increases with age and experience. At levels 1-3, a Friar’s strike does 1-6 points of damage, at levels 4-6, 1-8 points of damage, at level 7 and above, 1-10 points of damage
Damage dealt by a Friar is automatically considered, "subdual damage", unless the Friar announces that he is striking to kill. An opponent driven to zero hit points by the unarmed attack of a Friar has been beaten unconscious, and while helpless, is not dead.

A Friar attacks on the Fighters matrix and not the Cleric’s.

A Friar advances in level on the Clerics Table.

All Friars below tenth level simply use the level title "Brother". At tenth and above, they are called, "Father".

Not all Gods will have Friar’s Orders in their service. Friar’s will always be of Good alignment, predominantly Lawful, with some Neutral, and few Chaotic.

Friar’s Brotherhoods of Greyhawk include, The Drubbers Brotherhood of Cuthbert, The Righteous Smiters of Pholtus, Fharlanghn’s Sons, The Enlighteners of Delleb and others. 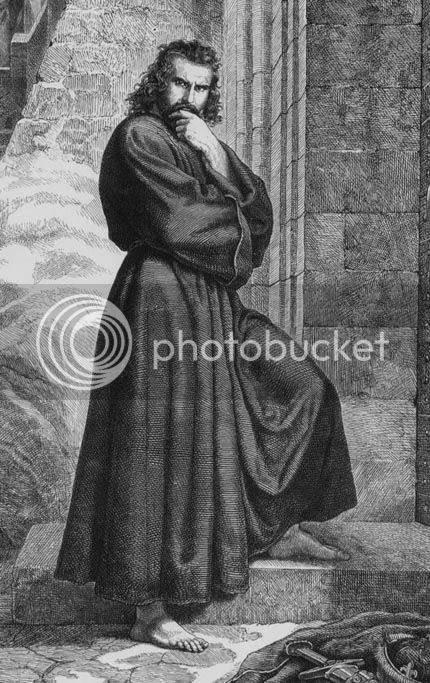 Friars will dress according to their order, with plain brown or black robes over their clothes or armor in most cases. The Righteous Smiters of Pholtus wear white or yellow, often with a Sunface embroidered on the shoulder. Cuthbert's Drubbers wear shapeless hats instead of hoods. Fharlanghn's Sons wear no shoes, and the Enlighteners of Delleb consider it their sacred duty to spread literacy and combat ignorance. They will always have writing utensils and materials to share. 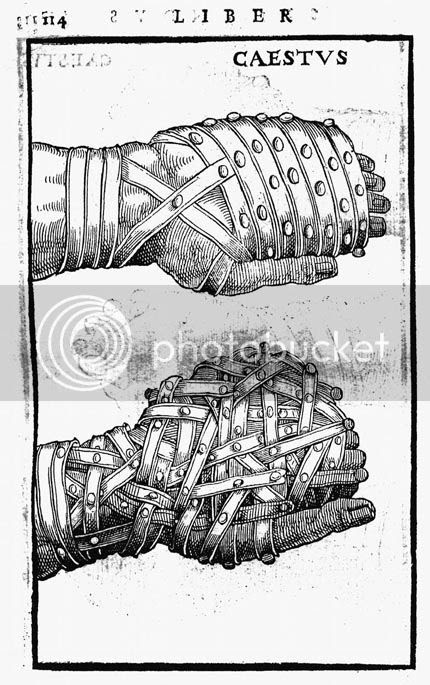 Caestus are actually Roman boxing gloves, I knew I had to work them into The Game at some point. Roman boxing was probably more like today's Ultimate Fighting than modern boxing as we know it. 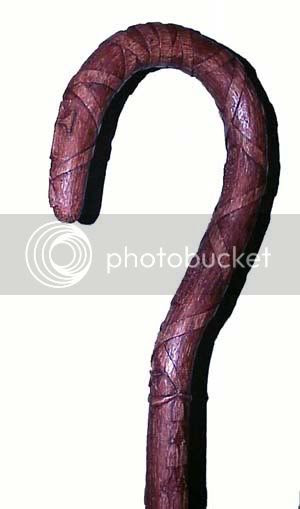 It's harder than you might think to find a good image of a shepherd's crook. This one looked the most, hand-crafted and sturdy to me. 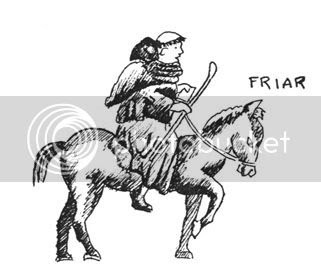 And, we're off to pummel evil!

This is EXACTLY the kind of Monk class I've wanted for my campaign. Thanks!!

You are very welcome, Pastor Bill! I was begining to think this one was a miss, since it had gathered no comments.

I really like the Friar concept and for many settings would prefer something like this to the standard Cleric. I'd like to see an OD&D Friar I'm just not sure how it would fit in as a Cleric replacement. I did skim this when you first posted it, but your forum thread at Fin's place reminded me to check it out again and comment. There's a lot to like with this idea!

Thanks Sham! The idea with this is to replace the AD&D monk and keep the cleric. The clerics relationship to the Friar would be like the magic-users to the illusionist.

Late to the game, but I love this class! Very cool in concept and design.

Even later to the game. This is really cool; one of few truly original things I have seen in a while. If you wanted a European feel to it, you could have clerics as secular clergy (temple priests), friars as religious or ordered clergy (ordered monks), and paladins in the militant ordered role (e.g. templars).

Damn it. If only I had found this before I started my game.

Well now this will have to be the Church's response to the Acolytes of Kalin! So win/win :)

I'm glad I read this before writing down the stats for my party's Friar henchman!