Run for your lives! It's a Grizzly Bugbear! 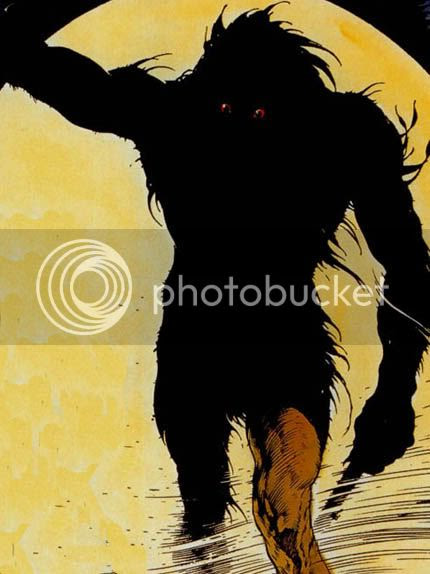 I clipped this image from a Frazetta Buck Rogers illustration. Frazetta is famous for his painted art, especially the Conan images, but he got his start in comics, and did a lot of excellent work in them.
I'm tired tonight, so I'll just go right to the reason for the above image.

Rarely, a lone bugbear, outcast, exiled, or perhaps a last survivor of it's tribe, will seek shelter from the bitter winter winds in the den of a hibernating Great Northern Bear. There, in the dark and silent depths of winter, sometimes, love takes it's unnatural course.
The result of this union of bear and bugbear is known as a Grizzly Bugbear.

Standing over eight feet in height, and weighing up to eight hundred pounds, the ferocious Grizzly Bugbear is a foe that even a band of ogres would fear to face.
Combining bear and bugbear features, the grizzly bugbear has a powerful hump of muscle across the back of it's shoulders that drives it mighty arms and tearing claws.
It's huge, knobby hands end in heavy, four inch claws which it employs both in ripping apart fallen logs in search of grubs, and also in tearing the heads off reckless adventurers. A long, shaggy coat of brown hair tipped with silver covers them head to toe. A short, but broad, and fang-filled, snout spans the width of their faces beneath their small, murderous eyes.

The Grizzly Bugbear is smart enough to use weapons, but will rarely think to do so.

If the Grizzly Bugbear scores an 18 or better to hit, it will hug the victim next round for a further 2-8 points of damage. The round after, it will drop the victim if under attack from other sources, or if not, it will bite for another 2-8 points of damage.
Bear-like, they are able to continue fighting into negative hit points, only collapsing 1-4 rounds after reaching -10 hit points.

A Grizzly Bugbear has excellent hearing and sense of smell, but poor eyesight. They move with a heavy shambling gait, but are capable of short bursts of tremendous speed, matching a horse for a short sprint. Their senses and speed allows them to surprise on a 1-3 out of 6.
A Grizzly Bugbear possesses great determination once it has decided on a goal, such as figuring out how to get a plump halfling out of a tree. While not as intelligent as most normal goblinoids, they are smarter than the average bear.

Any encounter between were-bears and grizzly bugbears will end in blood shed.

Grizzly Bugbears very much enjoy sweets, and will force-feed captured halflings on wild berries before devouring them.
Posted by E.G.Palmer at 7:07 PM

So, I guess nobody got the Yogi joke, huh?

I laughed, and knew that you were a cut-above the average OS gamer, Boo-boo. :)

duh, forgot to tell you that I really like this one. :D