Will you stand before the Griffagon? 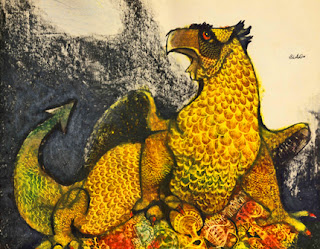 With its great eagle head, mighty feathered wings, and brazen scaled dragonish body, the Griffagon is a beast of striking appearance and fearsome presence.  The origin of these creatures is uncertain and much disputed.  The Eagle-Drakes themselves are disinclined to illuminate the matter for lesser creatures, and generally eat those who persist in inquiry.

Griffagons display many of the behavioral characteristics of both dragons and griffins. They desire and amass treasure as do dragons, and crave horseflesh as do griffins.  They are terrible and unrelenting foes when aroused, aloof and superior in repose.

None who stand before the griffagon and meet its piercing gaze may speak an untruth. A Save vs Spell is necessary to break eye contact and be released from the compulsion of the beast’s transfixing stare.
It is for this reason, along with the griffagon’s unyieldingly lawful nature, that they are sometimes sought out to render judgment in disputes wherein none of those concerned trust to human justice.

Famously, the griffagon Ahjurunduous comes to the crossroads of the Red Cobble and the Lord’s Stumble at each change of the season, and there hears quarrels, accusations or other legal considerations. He demands respect, pomp and circumstance, as well as payment, but is unbribable and unconcerned with matters of station. He is thus much loved by the peasantry of the area.

The breath weapon of a griffagon is a tremendous eagle-like scream of great, resonant power. Its effect is as that of a Horn of Blasting, save that it does damage equal to the creatures hit points as would a dragon’s. The weapon’s area of effect is conical as a red dragon’s and does structural damage to constructions as would a horn of blasting.
Posted by E.G.Palmer at 7:44 PM 6 comments: