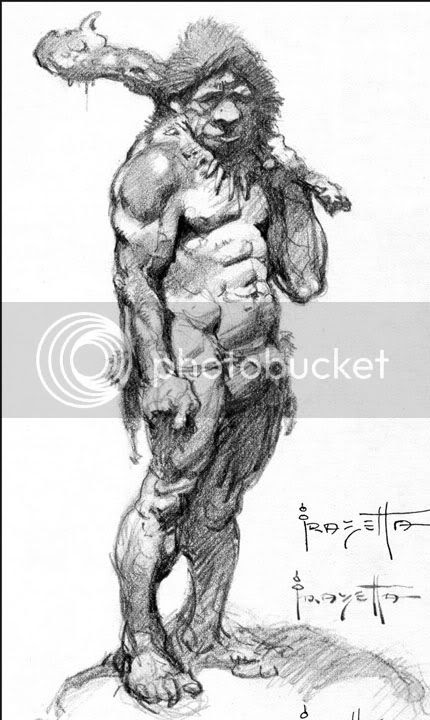 This is clipped from a 1971 convention sketch by Frazetta. A recent post by James Malizewski at Grognardia brought this image to mind and I thought I'd share. I'm a nice guy like that.

The post was called Myth Busting, you'll have to go back and dredge for it your self cause my links often don't work. Though, since it racked up 66 comments pretty quickly, I bet you've already read it. I only have a few blogs here on the sidebar at Old Guard, but my gaming related favorites on internet exploder takes almost a ten count to scroll all the way through, I can't check them all every day, but Grognardia is a daily read for me.

Anyway, Myth Busting was about the perceptions of old school gamers by the newer generations. I can't say myself what goes on in other peoples heads, I'm multi-tronic myself, so things that are apparently unrelated to whatever conversation I'm having at the moment sometimes pop out of my mouth and confuse others, since I'm running other trains of thought concurrently. Snerk.

My old school is big, really, really, big. I'd describe how big, but I forget the rest of that Hitchhikers Guide quote. I like to read the perpetual discussions online of what exactly constitutes Old School, I'm always picking up new perspectives and bits of history that I hadn't been aware of before, and that's fun. The thing is, I think that what makes the difference between old and new is not what's included in the old, but what's excluded from the new.

Original, Advanced, even 2e, were open, huge, unlimited in scope. I'm not talking about mechanically, I mean the attitude toward what could be included in the game. Fantasy of every flavor, science fiction, popular entertainment of whatever description, war gaming concepts, tv and movie ideas etc. Nothing really was excluded from possibly making an appearance in your game.
Just as it was with early science fiction and fantasy literature, there wasn't a clear dividing line between what was permissible in D&D and what wasn't. I think that is a strengh, not a weakness. The abstract nature of the rules lends itself to an expansive perception of just what the game is. That's why, while I'm interested in how others define old school play, I'm not interested in seeing any single definition be accepted generally by all.
If you perfectly define a thing, you kill it.
If it can no longer change, or grow, or contract, it is static and it will be left behind and forgotten eventually.
That's why I like to see you guys fight. Not because I want to see discord for it's own sake, but because it means there is life still in the Old School. And even if sometimes there are hurt feelings for a bit, the ideas churned up by the conflict spark new lines of thought and feed the fire of innovation.
I prefer, of course, to discuss ideas with the like-minded, just like everybody else. Like-minded doesn't mean hive-minded though. I'm not going to gain anything by talking to myself in a mirror.

What I see as being the main difference between the old and the new is the degree of definition assumed by the rules. Old School is deliberately vague on many issues, and that's what keeps it alive. It can still change, grow, Adapt!, Improvise!, Overcome! Sorry, I worked with a marine once, and it kinda gets on you.
The new stuff is so rules burdened that it's D.O.A. in my eyes. It is defined right into the grave. This is how you do that, that is what happens then, always use the optimal mechanical option so, and there, we're done, game over, see you next week. They can put out as many new expansions as they want to give it the illusion of flexibility and thus life, but when they reach saturation point, they can only put out a new edition and start over.

I'm not attacking adherents of the new. I don't see any point in it. It somewhat irks me that Wizards of the Coast puts out a game they can legally call Dungeons & Dragons when it really isn't, but the fact that it isn't means that the friction between the Old and the New just doesn't have any great traction with me. Sure, I'll kick Wizards of the Coast in the balls occasionally, they deserve it, but there's no deep malice in it. They're like the SYFY channel of gaming. not nearly as interested in gaming as in gamer's dollars.

In my own comment on Myth Busting, I said that I saw Old School gaming as radical gaming, in the original meaning of the term. Of the Root. Old School is roots gaming, the starting point from which your own game can grow in any direction you wish. It means you aren't limited by what's official, or whats in the newest expansion, or what stack of abilities you need to get the kewl powrz. It means you can mix and match and tear down and rebuild your game in any number of ways and any number of times however you like. You can draw inspiration from any source and pull rules from any of your fellows. Accepting Old School rules means you don't have to play by the rules.

Man, my fingers are tired, I've been laying tile all day, how the hell does Malizewski do this every day?
Posted by E.G.Palmer at 8:11 PM

I am surprised that I am the first one to comment, so I'll make it brief: Right On!

Well said. Glad to have stumbled on this post. For myself, I'd add that part of the "old school" has a great deal to do with the community-supported nature of the product. And although I agree with much of what you say here, I'm not so sure this applies in the case of some later editions as much as to the earlier. But that's just me.

Well, all right! I didn't think this post was going to get any response at all, and then two out of the blue. That's great!