Somebody back east is saying, "Why don't he write?"

Them what die alone on the prairie, don’t always rest easy in their grave-less sleep.

Those who end their days in solitary desperation sometimes rise and seek succor in the company of the living. A Prairie Companion is such an unliving creature. Existing forever in the state of lonesome fear which filled its final moments, it is drawn to the sounds of living camaraderie.

Should a party of the living encamp within gunshot of the place a Prairie Companion met its friendless end, there is a 25% chance, (cumulative per night), that it will rise and seek company to ease its endless loneliness.

It is never the generous or the good-hearted who become deathless creatures such as the Prairie Companions, however. Rather, in life they were of the sort who blamed others for their misfortune, and bitterly resented those who possessed contentment or good fortune.

As it approaches the campsite which attracted it, the Prairie Companion will begin its Importunate Mutter. It retells the story of its demise, it pleads for help, and it explains how it was not to blame for its unfortunate circumstances. All in a soft, begging spectral voice.

All who hear the Importunate Mutter must Save vs Charm. Those who fail the Save will fall into a state of deep and debilitating despair. They will be unable to summon the will to do anything other than sit and stare into the camp fire, (if there is one), and wallow in self pity and hopelessness.

If the Prairie Companion is not destroyed or driven off, it will circle the camp, muttering, until dawn, when it will return to its unresting place.
No healing of hit points through normal rest will occur while the Prairie Companion continues its muttering. No magical spell may be memorized, or granted by higher, (or lower), Powers, while the companion circles the camp.

No character or NPC who failed his save and fell under the spell of the Importunate Mutter, will have any memory of the past nights events when the sun rises again.

Each night the party remains in occupation of the encampment, the Prairie Companion will return at sundown. Each night its muttering will become louder, and angrier. It will begin to lay the blame for its terrible fate at the feet of the party. Each night it will approach more closely to the fire in its path about the camp.

As on the first night, all present must Save vs Charm or fall into despair. Those who failed the first night suffer a -1 penalty to Save, cumulative each time the Prairie Companion returns.

The Companion will return for a number of nights equal to the number of persons present in the camp.

On the final night, ranting incomprehensibly in rage at the unfairness of its death, the Prairie Companion will enter the camp and lay hands upon a random character or NPC. If the victim is not under the spell of the Importunate Mutter, the undead must roll to hit as in normal melee. If the victim is in the throes of the despairing charm, he will take no actions to defend himself.

In either case, the victim must Save vs Death Magic, or else have his life energy drained to the dregs by the terror wight. Those who do save will still take 2D8 in damage, and forever after suffer a fear of being alone. This life draining attack is not a power the Prairie Companion may draw on at any time. Rather, it must work up to it by way of the nightly visits and muttering.

After taking a life, the companion will vanish and return no more. Until the next time a party camps within gunshot of its earthly remains.

A Prairie Companion is not harmed by mortal weaponry. Only magic, silver, or holy iron may do it damage directly. A circle of Protection will prevent it from coming into a camp, and if established prior to the companion’s first visit, also lessen the effects of the Importunate Mutter. 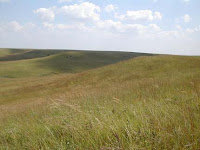 As for myself, I haven't written here at the Old Guard Blog for a while because I just haven't had the time or the proper muse. Too many other things have drawn my attention and energy in the last couple of months.

I saw part of Dances with Wolves recently though. That bit with Timmons the wagon driver, when they happen upon the bleaching bones of some unfortunate out there, alone on the prairie, was always my favorite bit in that movie. I thought I'd work it into Torch&Sixgun, my AD&D/Weird West homebrew.