Mike Mignola's take on Fafhrd and the Gray Mouser. 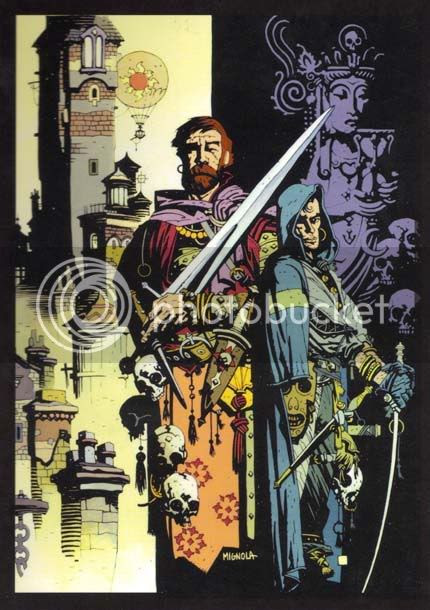 From the author's forward to Ill met in Lankhmar, by the mighty Fritz Leiber.

"This is Book One of the Saga of Fafhrd and the Gray Mouser, the two greatest swordsmen ever to be in this or any other universe of fact or fiction, more skillful masters of the blade even than Cyrano de Bergerac, Scar Gordon, Conan, John Carter, D'Artagnan, Brandoch Daha, and Anra Devadoris. Two comrades to the death and black comedians for all eternity, lusty, brawling, wine-bibbing, imaginative, romantic, earthy, thievish, sardonic, humorous, forever seeking adventure across the wide world, fated forever to encounter the most deadly of enemies, the most fell of foes, the most delectable of girls, and the most dire of sorcerers and supernatural beasts and other personages."

As much as I love Conan, and John Carter, and Elric, Fafhrd and the Gray Mouser are my favorite Sword and Sorcery characters. They are the most human and true-feeling to me of any such heroes in the genre. They are rife with human failings and needs, and at the same time, capable of those split-second moments of brilliance when we surpass our limits and accomplish those things we shouldn't quite be capable of.

Fritz Leiber's grounding in Shakespearean theater is probably what gave him the insight into human character that allowed him to create the two greatest swordsmen in all Newhon.

The art shown here is from the dust jackets of the White Wolf editions of Leibers stories published in 1995. Probably the best thing White Wolf ever published.
There hasn't been a whole lot of art depicting Fafhrd and the Mouser done. No where near the amount that that glory hog Conan gets, or even that pasty drag queen Elric.
I'm kidding, I'm kidding! I love Melniboneans, really.

You probably know Mignola more for Hellboy and related comics than anything else, but these covers are my favorite pieces of art from him. They have a deep, moody atmosphere that meshes perfectly with the Fafhrd and Gray Mouser stories. They stink of Lankhmar, City of Sevenscore Thousand Smokes.
Mignola also did black and white decorative illustrations for chapter headers in this edition, but not action illustrations, like like the great little scenes that Frazetta did for the John Carter books. That's a shame, because they would have been great to see. I doubt we will see so much small job illustration from Mignola in the future. He's going the way of Frank Miller now with the success of the Hellboy movies. Let's just hope he doesn't decide to do a comic series with a psychotic, ranting Batman too. 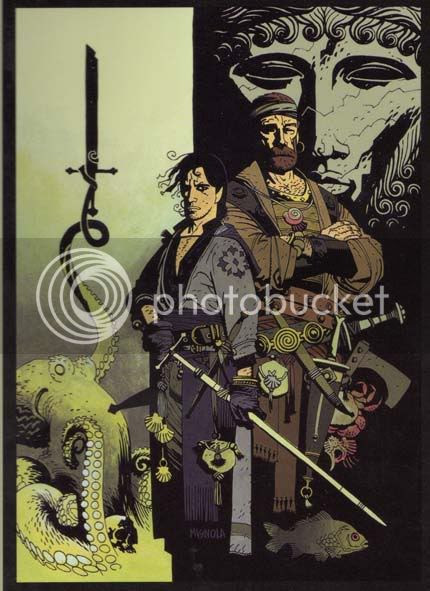 I think it was Dark Horse comics which did a Fafhrd and the Gray Mouser adaptation series with Mignola as the artist some time ago. Hmmm, was that the late eighties? I don't think I have a copy of that in the comic archive, though I'd like to find a clean one. I don't know if it has been reprinted recently. They should though.

Fafhrd and the Mouser have never made it to the tv or theater screen, and while, theoretically, I'd love to see that, I know it wouldn't come out very well. They just never do, do they?
If the stories were FAITHFULLY adapted, with Shakespearean quality actors, and solid effects, and not kiddified, or "updated", or "reimagined", or neutered, they would be the most powerful sword and sorcery on film. I know full well that this will never happen, so I'm content to let them remain print and art only. If hollywood, or,horrors, the syfy channel got their clumsy, grasping paws on Leibers work and gave it the rewrite treatment, I'd have to take my broadsword and go out there. 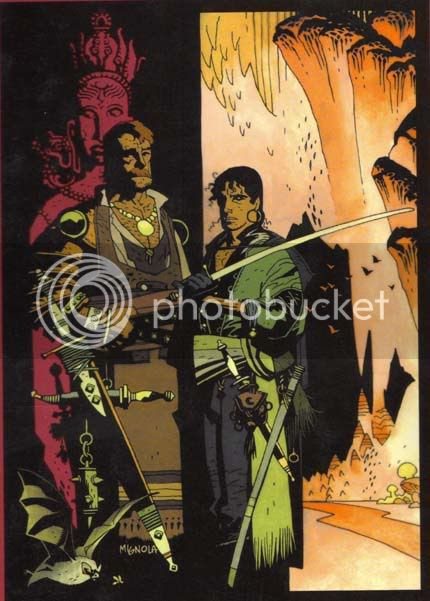 I have a woodworking blog also, and one of my longer term plans will be for a ridiculously ornate wooden Dungeon Masters screen. I've had great luck with incorporating printed art into furniture projects, and I think these three images, interspersed with some Frazetta Conans, and Gould Elrics would make for an excellent art wall for the outside of the screen. I think it would really reinforce the pulp origins and feeling of The Game for the players. Creating that atmosphere of danger and adventure is conducive to good gaming, I think.

Consider it a wall of role(roll?)models.

Want a reprint of the Mignola volume? Here you go:

Hey, thanks Rob, I see that no evil will escape your sight!

Mignola's Fafhrd and Mouser are marvelous. I love how weathered Fafhrd looks, and how slight Mouser is (look at his skinny wrists!). A bit more solemn than I picture them in my mind, but I suppose these covers are more like formal portraits.

The TPB of the comics is great. I know it's out there because I bought a fresh, clean copy for a friend just last year.

Dark Horse did the recent TPB collection, but it was Marvel (under their Epic imprint) that originally published Mignola's version of F&GM back in the late 80's/early 90's.

That's interesting Knightsky, I didn't realize that it was from Epic originally. A lot of good stuff came out of there.