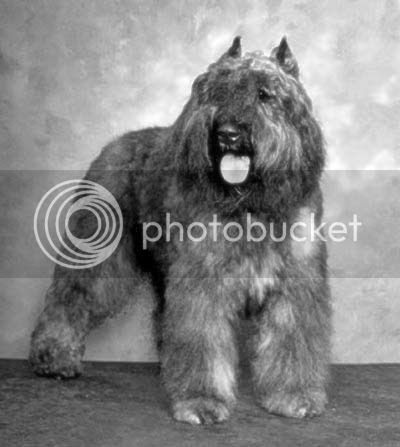 Dwarves breed these stocky, powerful dogs as guardians of their strongholds, and as helpers in their mines and tunnels. Intelligent dogs with excellent morale, tunnel dogs make steadfast companions. Highly prized by the dwarves, they are rarely sold, and then only for a great price. They are sometimes given as gifts to those who have done the dwarves a very good turn.

A heavy coat of wiry, nearly metallic fur gives tunnel dogs good protection from attack. Also, they are often fitted with studded leather or other types of armor. Dogs working in mines, or accompanying expeditions wear saddle bag-like packs to carry supplies.
A tunnel dogs sight is weak, but they have excellent hearing and sense of smell. A party including tunnel dogs is rarely surprised by normal foes.
A tunnel dog has no fear of fire, being raised with forge and foundry, and will carry a lantern or even a flaming torch in it's jaws if directed.
The dogs work in concert with other dogs or their masters in attacking intruders. A tunnel dog will bite and clamp down with it's jaws on the hands or other extremities of an attacker and hang with their full weight, wrenching and twisting in an effort to pull down the target creature.
The victim of such an attack must roll under it's strength score if less than twice the dogs weight, or be pulled down to the ground. There to be easily dispatched by the dogs masters.

Like dwarves, tunnel dogs love both beef, and beer.
Posted by E.G.Palmer at 9:29 PM

Tunnel dogs are fond of a good shampooing too I see. ;)