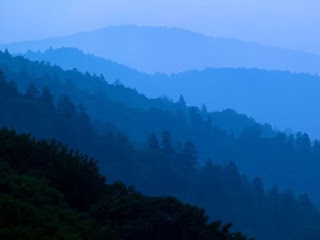 The dark woods, masking slopes of sombre hills,
The grey clouds' leaden everlasting arch;
The dusky streams that flowed without a sound,
And the lone winds that whispered down the passes.

It was a gloomy land that seemed to hold
All winds and clouds and dreams that shun the sun,
With bare boughs rattling in the lonesome winds,
And the dark woodlands brooding over all,
Not even lightened by the rare dim sun
Which made squat shadows out of men; they called it
Cimmeria, land of Darkness and deep Night.

It was so long ago and far away
I have forgot the very name men called me.
The axe and flint-tipped spear are like dreams,
And hunts and wars are shadows. I recall
Only the stillness of that sombre land;
The clouds that piled forever on the hills,
The dimness of the everlasting woods.
Cimmeria, land of Darkness and the Night.

Oh, soul of mine, born out of shadowed hills,
To clouds and winds and ghosts that shun the sun,
How many deaths shall serve to break at last
This heritage which wraps me in the grey
Apparel of ghosts? I search my heart and find
Cimmeria, land of Darkness and the Night.

Posted without permission, because I really like this poem, and Howard's works in general. And he's dead, and I don't make any profit from this blog, and I want you to see it, and I think its fair use, and IP laws are strangling culture and literature to death and making us all poorer for it. And I have a sense of ennui concerning the new Conan movie. And I haven't made up any new monsters for you lately.
Posted by E.G.Palmer at 8:01 PM 5 comments: 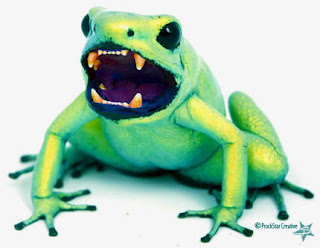 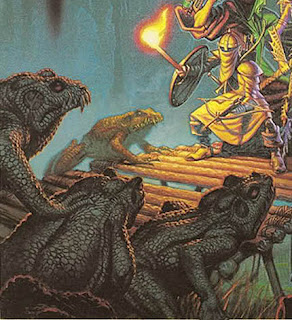 The second pic is just funny, so I included it. I do stuff like that.
Posted by E.G.Palmer at 6:57 PM 7 comments:

Here's the winners in the Fight On! Big Book Of Random Tables contest. I got a couple honorable mentions for two of the 100 item random tables I put up here on the Blog.
I had completely forgotten that I'd entered this, until I got an email from the gracious Ignatius Umlaught the day before yesterday.

All these tables will be compiled into a Fight On! book, and it looks like it will be a very entertaining and useful tool for DMs.

Rudingoz, Patrice Crespy
Swashbuckling Adventure Generator, Ralph Mazza
The Dungeon is Trying to Eat You! Best Of, Remix!, James A. Smith
What’s in that Hole?, Matthew Schmeer
Drink Me, Eat Me, Mr. Reaper


Just how many OSR inspired D&D fan magazines are there now?

I know of Fight On!, Knockspell, Oubliette, I know there are others. Who am I forgetting?
Posted by E.G.Palmer at 7:15 PM 4 comments: