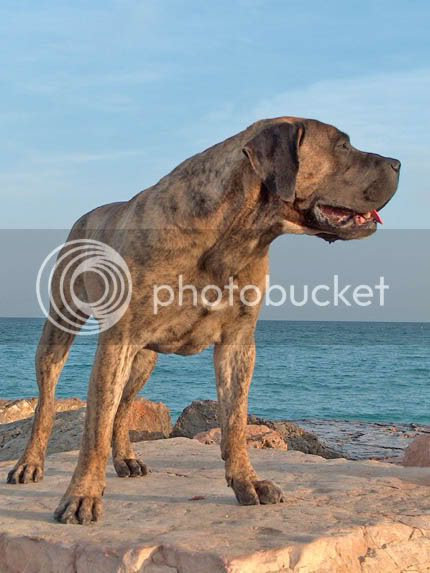 As normal wolf hounds were bred to fight wolves, so has the warg hound been bred to combat wargs. It is assumed that magic of some sort played a role in the creation of these mighty dogs, but the facts of their origin are lost in the past.

The greater size, strength, and also the malevolent cunning of wargs required the creation of a dog of heroic stature and unrelenting nature. Warg hounds are loyal to the point of self sacrifice, obedient and eager to do battle with the enemies of their masters.

They are very intelligent dogs, and learn to work with men and horses in war. They are often armored in boiled leather with studs or metal plate, depending on the situation.

When used in hunting wargs or other unnaturally large or powerful creatures, such as owlbears, or the black boar of the forest, the dogs employ tactics specific to each creature.
Wargs will be run until exhausted, then held until the hunters arrive and dispatch it. An owlbear will be harried from many sides until worn down. The dogs will not allow it to choose a single target for its fury, instead alternating attacks from all sides.

Warg hounds are only found in areas where there is great need of them. The cost of housing, training, and feeding a dog the size of a cart pony are such that only warlike border lords, and boundary chieftains will maintain them.

If a warg hound hits successfully on it's first attack, the second round it will automatically Savage a man-sized or smaller target, vigorously shaking the victim for the same amount of damage as it's initial bite caused.

A larger than man-sized target the dog will Hold on a successful hit, gripping an extremity with iron determination in its powerful jaws. This will slow the targets movement rate by half. If a second Warg hound also successfully hits and Holds, the target is stopped completely, and easily killed by hunters or a third warg hound.

A warg hound is considered, Game, meaning it never needs to check morale and will not retreat or abandon other dogs or humans no matter the enemy faced. Also, a warg hound will continue to fight down to -10 hit points before death.

A warg hound is considered Lawful, in the sense that it is absolutely obedient to its master's commands. The great dogs crave purpose and order. The warg hounds are considered to be Good in that they are protective of humans and especially vigilant around children.

Warg hounds are bred to work, and not to a standard, so though they generally are short, or wire haired, they may be of any color or pattern. Most often, the warg hounds of the north are brindle, while those of the south are white. 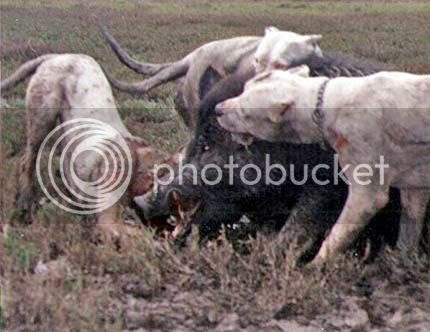 The top pic is a Presa Canario, the the bottom is a trio of Dogo Argentino holding a wild boar.
These are fairly recently created breeds, purposely designed for hunting large and dangerous animals.

The idea for the Warg Hound popped into my head a couple days ago. It just seemed logical that people faced with extraordinary threats would created extraordinary responses to deal with them. I've been reading all the Tolkien talk about the blogosphere lately and the Professor's Wargs were one of those things that made an impression on me as young grognard.

So, I was sitting on the couch, watching the Dog Whisperer with the Pupster, my pitbull/labrador mix and Caesar got himself bitten by a big German Shepherd. The Pupster woofed, cause he likes to hear Caesar's voice, even if he doesn't learn much from the show.
That's when I thought, hmmm, in a game world, people would have to have some way of dealing with wargs and owlbears and such when there aren't any PCs around to save them. How do real world people deal with real world wolves and bears in a medieval setting? Big Dogs!
Posted by E.G.Palmer at 3:52 PM

I glad I'm not the only one with a pitbull/lab mix...what a great crossbred!

They are, aren't they! He's the smartest dog I've ever had, and the most eager to learn. When I point at something, he looks where I'm pointing, and not at the end of my finger.

Haha, mine has become kind of stupid (at 16 odd years old), but she is a total sweetheart! Not an aggressive bone in her body and so gentle (aside from stepping on my testcles or smashing my nose with her anvil skull). She will approach a cat and sit there whining while it swats at her nose.

Excellent stuff. I've been a fan of 'warhounds with everything' in fantasy games since our last Mordheim kick a few years ago. As far as I'm concerned a low level adventurer who doesn't have a big loyal dog as sidekick is asking for trouble.

Heh, the Pupster has his own cat, Teej. When Teej stalks by the dog pillow, the pup will put out a paw and drag the cat in. Then they take turns washing each other's heads.

Also, Huan, why didn't I think of that?