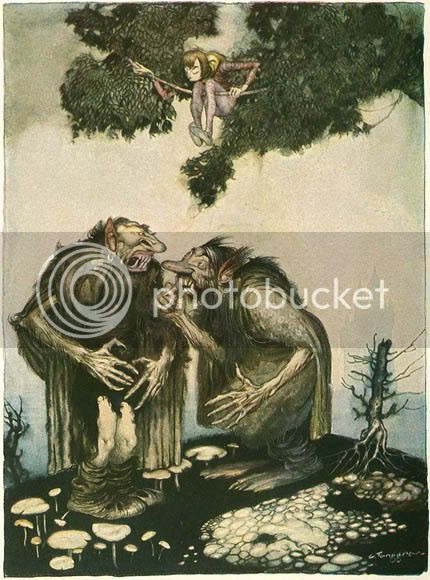 Gustaf Tenngren, 1923 Grimm's fairy tales. I don't know which story those things are from, but I find them pretty awesome. I'm thinking that kid in the tree is probably screwed, Grimm's fairy tales aren't like the precious snowflake stories of today, where every one gets a trophy and goes home feeling emotionally validated. That kid's gonna overreach himself and end up on a spit. I think I'd make them hybrid troll-ogers, Trolgers, yeah, I'm gonna have to write that up. But not today. I just put that picture up because I like to have one on every post. It just feels more complete to me.

The think I wanted to post about is Hackmaster. Now, I know the grog-blogs and old school forums have kicked this game around and chewed over every minute part of it in our unending war of definition over what is and is not true to the original spirit of The Game. And, I'm not interested in fighting about it. All I want to do with this blog is throw stuff out there and hope it's useful to someone. I'm more of a gardener, or a maker, than a dogmatist.
I think the best we can do to ensure the success of the old school Renaissance is to get as much material out there as we can. blog posts, free pdfs, print on demand stuff, whatever. I would like very much to be able to put up some stuff for sale after awhile, I've got several irons in the fire. We'll just see how it goes.
Hmmm, I seem to have wandered away from my intent there.

Anyway, I think Hackmaster is a joyous thing. sure, it's huge and unnecessarily rules heavy, but it's supposed to be. It's a parody game. It's AD&D full of jagermiester lurching down the street singing and belching and setting off car alarms. It would be an agony to run it by the book and I doubt anybody does, or did.

Now that Wizards yanked the rights back from Kenzer, It's pretty much a dead game. Sure, Kenzer is coming out with a new edition, with all the AD&D stuff removed, and I'm sure it'll be a great game. Kenzer has put out alot of great material. I don't have a copy of Aces&Eights, their western rpg yet, but I've heard alot of good things about it.
But the thing is, I don't need, or want any new fantasy rpg. D&D, the retro clones, are all I need.
The abstract nature of the game means that I can stretch it to fit any genre I want, with a little elbow grease. And that's just fine.
I would rather build an imperfect thing myself, and learn in the doing, than have it delivered to me on a platter. I just can't value a thing that didn't cost me any effort.

I've wandered again, and I'm not even drinking. It's distracting to do this while having conversations in another window.

I wrote most of a module for Hackmaster before I realized I'd never have anyone to run it for anyway. It was a take off on The Island of Doctor Moreau. Mad transmogrophist wizard, lots of bizarre monsters. I'm just going to put up some of the monsters for you guys to use if you like. Remember, it was written for Hackmaster and so in keeping with it's over the top style.

The Ditch Archer is a smaller surface dwelling cousin of the cave fisher. An ambush predator, the ditch archer secrets itself on hillsides, roads , and in forested glens to wait for likely prey.
Instead of the adhesive pad of the cave fisher, the ditch archer shoots a sharp, barbed harpoon on the end of it's long filament line. The bony harpoon will embed in the victim,doing, 1-4 point of damage immediately, and the same each round if the speared creature resists being hauled into the archers waiting jaws.
As the archer is around three hundred pounds on average, it will choose smaller than man-sized targets if possible. If not, a hungry archer will not hesitate to shoot for larger prey.

The Orctiboar is to orcs as the manticore is to men. It has the body of a huge boar, the wings of a gigantic bat, and the enormous, slavering head of an orc. The orctiboar sees all smaller creatures as food. It especially enjoys rooting out halflings, gnomes, and goblins from their burrow homes. Anyone face to face with a bellowing orctiboar must save vs poison, or be overcome at the horrid stench of it's foul breath. Those who fail to save are incapacitated for three rounds with retching and unable to fight.

I have many more I'll post next time. now I think I will have that drink.
Posted by E.G.Palmer at 8:10 PM

Those are both totally sweet! I can't wait to see what else you've got up your sleeve!