With apologies to Erol Otus. 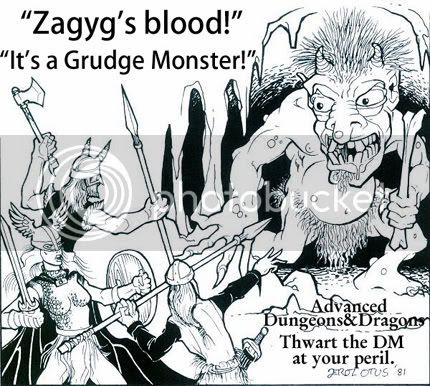 I've been slowly trying to teach myself to use photoshop. I haven't advanced very far yet, but I've made myself a couple of t-shirts as stylish convention wear. At least from my most narrow of perspectives, they are. My wife fails to be impressed, though she most patiently listens to my subtle expositions on the nuances of Dungeons & Dragons art of the old school. 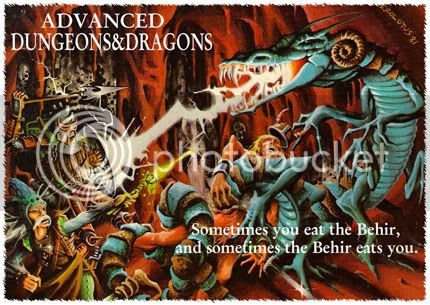 When I was a kid, I didn't care for Otus's style. It seemed to weirdly cartoony to me then, I was a Marvel comic kid and Willingham's stuff appealed to my superheroic tastes more. Now, Otus is my favorite of the early TSR artists. That weird otherworldly look to the adventurers, their equipment and their foes, fits perfectly with what I want in the game.
Looking at that party struggling with the Behir, or the group confronted with the giant troll, makes me think about just how cool it would be to see Otus illustrate some of the sword and sorcery masters. Just you imagine what Clarke Ashton Smith's Zothique or Fritz Lieber's Newhon would look like seen through the fantastic opium smoke dream haze that Erol Otus could give it.
Yeah, that would rock.
Posted by E.G.Palmer at 9:12 PM