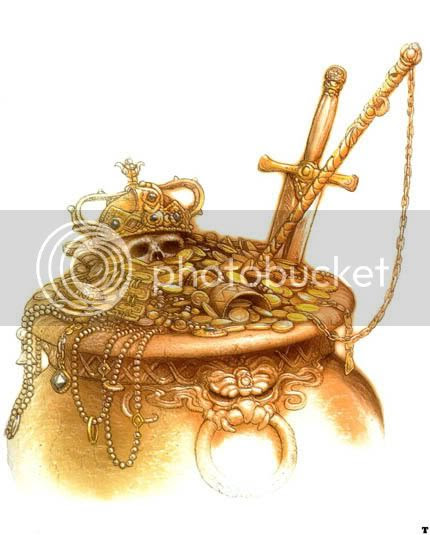 Here's another illustration that inspired a new monster. This one is from Ciruelo Cabral, again I don't think it's been used in any official D&D material, but I'm not sure.

Golden Bones are a type of undead skeletal guardian created to protect the grave goods of the most miserly and greedy of the deceased. Made from the skeleton of the tomb occupant himself, Golden Bones are singularly focused on defending their hoard.

When first encountered, golden bones will simply appear to be a yellowish skull half buried in an urn, chest, or pile of gold coins and other treasure.

If this treasure hoard is approached, however, the golden bones will stand up, revealing itself as a complete skeleton, totally covered in lustrous gold. It will then seize it's weapon, usually a bejewelled sword embedded in the coin pile, and attack.

Tomb raiders may at first think they face simply a decorative version of the more frequently encountered animated skeleton, however, once the golden bones has taken half it's hit point total in damage, the true horror of the situation will be revealed.

The golden bones will return to it's treasure, thrust in one skeletal hand, and regenerate it's lost hit points by absorbing the precious metal. Adventurers will see coins roll up the gleaming bony arm and meld into any damaged portion of the skeleton.

Characters will likely wail in anguish at the sight of the vanishing gold.

This stratagem creates new dangers, however, denied access to it's own gold, the golden bones may choose to grapple with a member of the party, absorbing whatever precious metals the character is carrying.

The same as with lesser skeletons, the golden bones suffers only one-half damage from sharp and/or edged weapons. Sleep, charm, hold, and cold based spells do not affect it.

If turned by a cleric, the golden bones will return to it's urn, resuming it's attack only if the treasure is disturbed.

If it is destroyed, all gold coating the skeleton turns into a powdery ash and is worthless.
Posted by E.G.Palmer at 5:46 PM