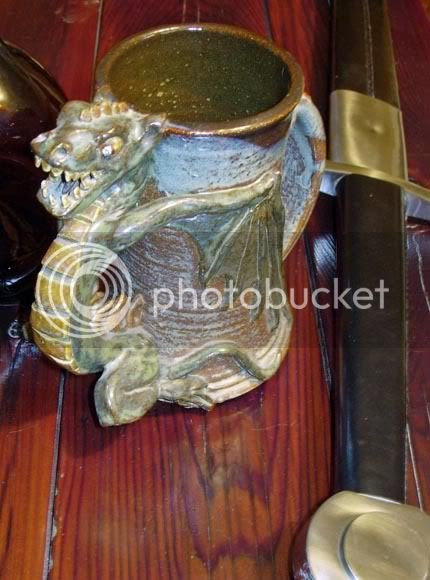 I got this mug at a Renaissance fair when I was fifteen. It will hold an entire bottle of mead, and it has done so many times. I'm a bit surprised that it has survived undamaged for so long as it has seen much hard use over the years, and little careful handling. Especially at nearly two pints per fill up.
Looking at it on the shelf yesterday, I decided to immortalize it as a unique magic item for a future campaign. I thought it fitting to make it something that would cause trouble and launch adventures, since, it's surely done that in the past.

A singular magical item, the Dragon Tankard is a large, heavy, clay mug with a sculpture of a rampant dragon wrapped around it's face. Drinking from the tankard will confer upon the imbiber the dragon speech for a limited time. This will give the ability to mesmerize listeners and plant Suggestions as per the spell.
The entire contents of the mug must be drunk, and the mug must be full for the magic to take effect.
The power and duration of the magic depends upon the strenght of the beverage used.
It must be alcoholic, at least beer, with wine causing more powerful effects, brandy or liqueurs still stronger, and uesgah or aqua vitae having the greatest possible effect.

Drinking a full tankard of beer will give the drinker the power to command the total attention of all persons within ten feet for three rounds and the ability to make a single suggestion to one person.

Drinking a full tankard of wine will give the drinker the power to command the total attention of all persons within thirty feet for five rounds and the ability to make suggestions to two people.

Drinking a full tankard of brandy will give the drinker the power to command the total attention of all persons withing fifty feet for ten rounds and the ability to make suggestions to five persons.

Drinking a full tankard of uesgah with give the drinker the power to command the total attention of all persons within one hundred feet for five turns and the ability to make a mass suggestion as per the spell.

The Dragon Tankard in no way protects the drinker from the deleterious effects of alcohol.
Drinking a tankard of beer will cause no ill effects, and a tankard of wine, only a light sense of satisfied confidence.
A tankard of brandy or uesgah however, will require the drinker to save vs poison or be inebriated. Failure to save requires Dungeon Master consultation of the intoxication table, page eighty-two of the Dungeon Masters Guide. Brandy will result in Moderate intoxication and uesgah will result in Great intoxication.


*normally charisma would suffer with drunkenness, however, the magic of the tankard will cause onlookers to perceive even incoherent babbling as though it were the wisdom of the ancients.

Dungeon Master adjudicating of drunken behavior must be carefully considered. At the state of Great intoxication, the Dungeon Master has partial control of the player character, acting as the Id. All sorts of deep desires and hidden motivations will surface under the influence of sufficient uesgah.

" And so, good people of Pluffmun, I say to you , the insolence of the Blor of Nudge must no longer be tolerated! No more sneering down his Long, warty nose, no more flouncing about and leering at our partridges! I say we go now and stuff his well with goat droppings!"

" Yess! Yess! Let us bespackle his stonework with offal!"

" What happened to, "put your heavy purses in this sack so that I may carry them for you?"