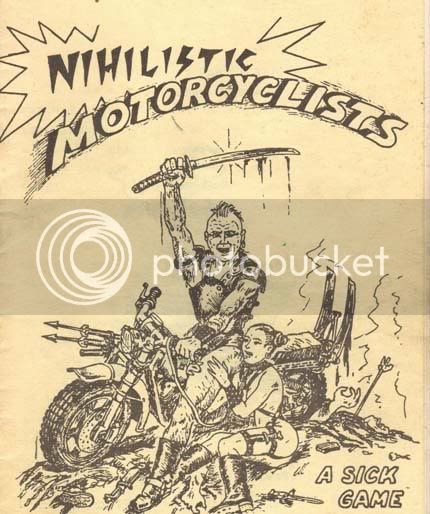 I've had this game in my RPG collection for about twenty five years now, It's not D&D, It's so rules loose that it barely holds together, and like the cover says, it's a sick game.
No matter who plays it, it manages to bring out the worst in them. Characters gain Victory Points for committing heinous atrocities. The more twisted, the more points.

I thought I would post this game because it appears to have no presence at all on the net, though my google skills may just not be all that good. A lot of people just don't believe it exists when told about it.

Carcosa caused a big furor online in the various blogs and forums I lurk about, and while I haven't read it yet, I seriously doubt that it could be any worse than Nihilistic Motorcyclists.
There isn't any cosmic horror here to distance the players from the acts the game requires.

The game is pretty much an rpg version of Mad Max and The Road Warrior, except the players are the psychotic biker nomads instead of the protectors of a dying civilization. There is no provision for playing any other sort of character, and once the game is under way, it's surprisingly easy to get sucked into pure barbarism for it's own sake by the pack dynamic.
The Toecutter and the Lord Humongous were girl scouts compared to the sort of characters that evolved during play. 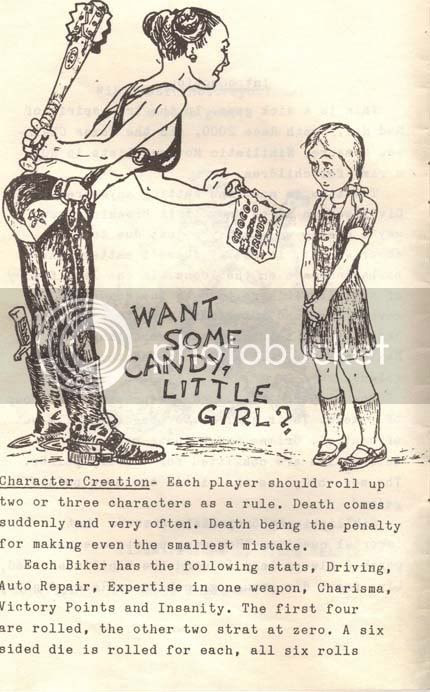 My gaming group only managed to run this game a few times. It just becomes too disturbing, you find your characters doing things that you never would imagine doing in D&D, or Gamma World, or any of the other games we ran at the time. Most people couldn't get beyond a couple of games, and that's when we were kids and death was still a joke.

The game itself is a single little pamphlet of twenty pages, about five and half inches by eight and a half inches, folded in the center and stapled. My copy is in good shape, mostly since it has had very little use. 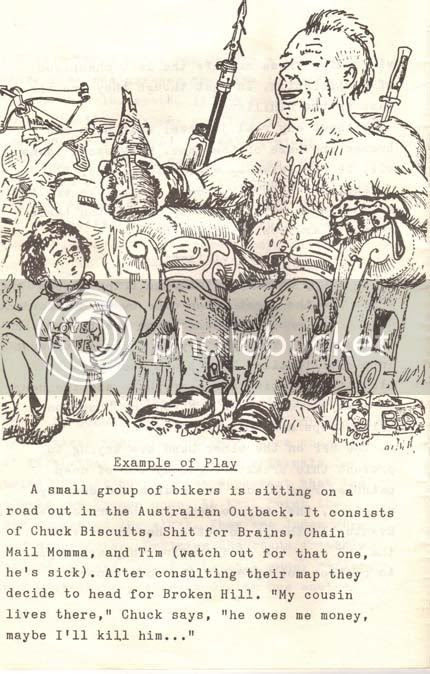 There isn't any end game to this and there isn't any goal, other than the competition to commit the most, "henious sick perverse autrocities". You don't build strongholds or conquer new lands, and nothing is of value except gasoline. 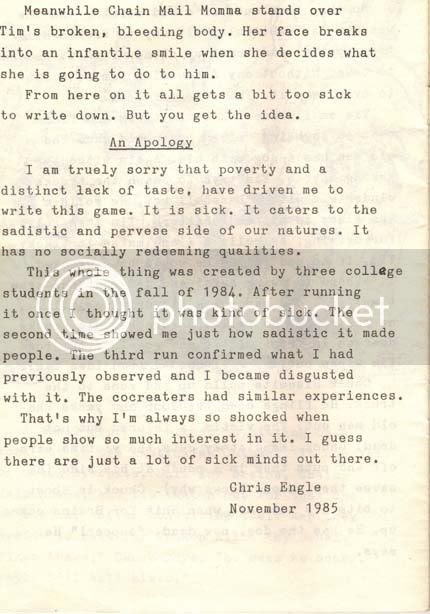 This post is neither to sing the praises of Nihilistic Motorcyclists, nor to tear it down. It's not the sort of thing I could play now as an adult, but back then, we were all full of geek kid anger at the world. I see this sort of thing as an artifact of gaming history. That's why I've kept it.
Then again, I'm a terrible pack rat and compulsive archivist. I rarely let anything with writing on it escape my collection. 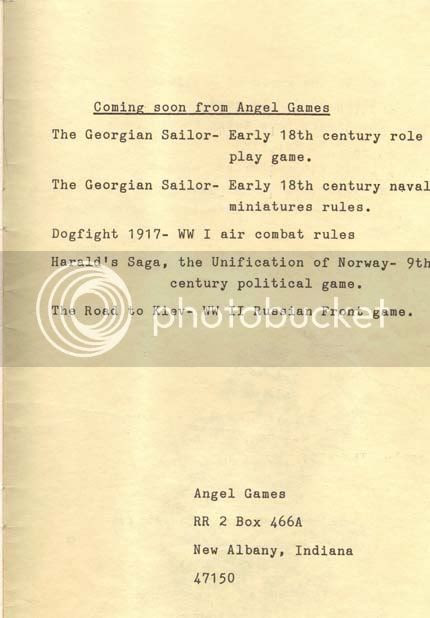 What ever happened to Angel Games?

amazing...
well, I'm from Indiana. So I can confirm that Indiana is indeed...sick.

Any chance at a scan of this?