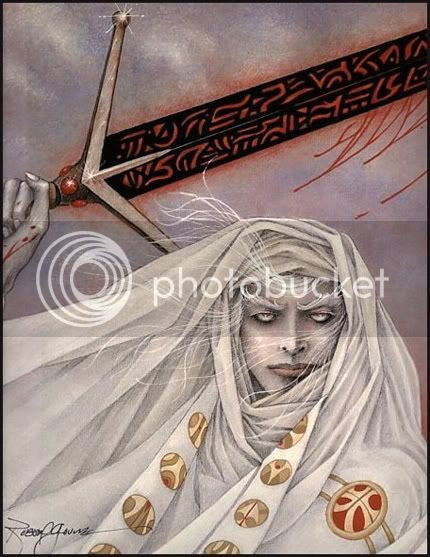 Bob Gould. You probably recognize this guy, right? If not, just go away now, I can't talk to you.

I think of the Melnibonians as excellent models for the Ancient Suel. Elric himself especially so. An Albino, eldritch wizard and deadly warrior at the same time, summoning and binding demons and elementals to do his will. That's how I see the aristocracy of the Suel Empire before the fall. Amoral at best, concerned only with self will, and seeing all others as tools to be employed to suit their purposes.

Elric is a perfect image of a Lord of the Suel in ancient times. White haired, remote from humanity, dark magic flowing through his veins, with a hell forged sword howling it's soul hunger in his long hands.

I create the rare npc in my Greyhawk of such lineage. Human, and a sword wielding magic-user, but this is never open to player characters. I only use them as antagonists. In my mind, the rules that govern player character magic use and weapons,may, or may not rule the npcs that players encounter. They can never expect to know the abilities of everyone they meet just because that person wears plate, or carries a staff. 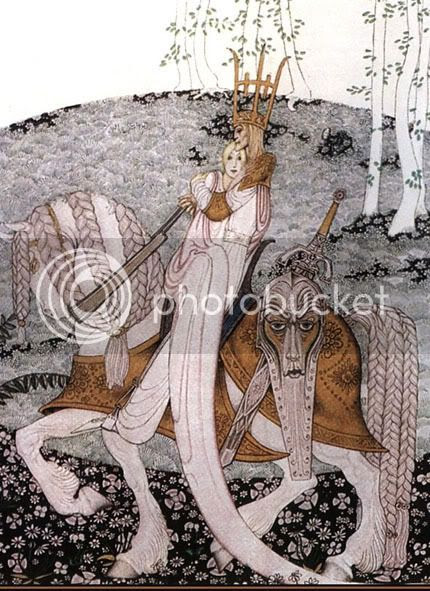 Kay Nielson. This is another from East of the Moon, West of the Sun. Just a piece clipped from a larger illustration. A more romantic image, but still in keeping with the sophisticated empire I think of. I especially like the braided mane and tail on the horse, obviously a large, well bred animal. I really wanted to show you the shield and sword though. Just looking at them gives me ideas for bizarre magic items. I mean look at the face, does that shield talk? Does it scream a war cry, or speak a Word of Power? That sword is enormous, obviously a two-hander, but he carries a shield so he must be able to employ it with one hand. Does it grant him strength? Is it lighter than it should be? Does it dance on it's own? Maybe it's the home of a bound spirit and fights without human hand.

Charles Keega. This is a Suel descended shield maiden of the Snow barbarians to me. I see the situation between the Old Suel and the Thrillonian barbarians as some what similar to what happened with R E Howard's Atlanteans. Falling into barbarity and re emerging as the Cimmerians.
Do you remember TSR's Howl from the North? Iuz pretends to be a returning northern god to bring the tribes together to launch his war against the rest of Greyhawk. What if instead, one of those suel wizard-lords of the old blood decided to overcome the barbarians aversion to magic and reveal to them their ancient heritage, what if he dreamed of a revived Empire. Of the north this time instead of the south. What if he strove to unite the Frost, Snow, and Ice barbarians in a single nation.
I think you could build a long term antagonist for your players with such a person. They could race him to reach some lost magic or item, fight his agents or engage in political skulduggery, heck, they might be of like mind and wish to aid him.
hmmmm, now I'm gonna be kicking this around in my head for a while.

Can you tell more about this artist?

oops! I didn't see your comment until today. Which of the artists were you interested in?
Bob Gould has done alot of great Elric art.
Kay Nielson is a golden age illustrator, that pic from him is from the twenties, I believe.
I'm afraid I don't know much about Charles Keega.

The one who did the warrior woman withe the spear and sword. Very nice.

That's Charles Keega. hmmmm, somewhere I had a link to an gallery with an entry on him. I'll warm up the google engine and see if I can't find it again. I'm very pleased to see you here, Rob. Viva la renaissance!

Ahh, that's Keegan, not Keega. no wonder I lost it. Here's his online gallery.
http://www.keeganprints.com/galleries.htm

Thanks, E.G. My wife really liked that one, as she imagines herself a warrior (as she is at heart), and claims, and rightly so, it seems, that there are not enough well depicted warrior-women in our related fields of Fantasy/FRPG.

His other illustrations were good, but this one stood out.