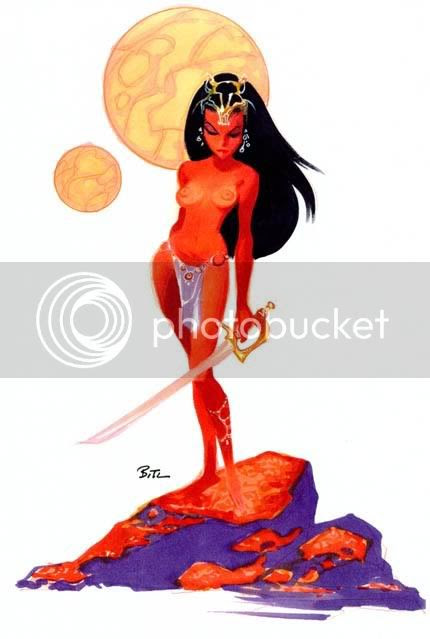 The first image is another by the mighty Bruce Timm. Timm's work can be deceptively simple at first glance, but he is a master of form and shading. I never get tired of this image of Dejah Thoris, Princess of Mars. The elements of this image, the rock, Dejah, the two moons, all flow upwards in a shallow curve that pulls the eye up, and back down again. It's also not your standard depiction of a pulp science fiction heroine. Dejah looks pensive, as though she were contemplating something sad and of great importance.

Great art suggests more than it tells. With no background other than the rock and the moons, any number of reasons for, or stories about, the cause of her mood come to mind.
You can see that a breeze is moving her hair, but with no background, it could be an evening wind with the moons rising across the martian desert, or it could be a storm coming in off the mountains. 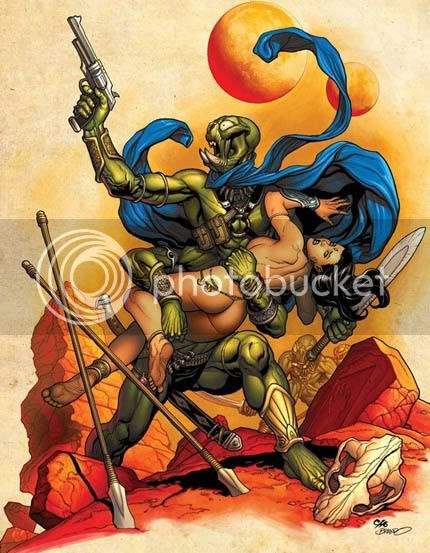 This is by Frank Cho, another of my favorite comic artists. Frank has a feel, pardon the expression, for the female form that's second to none. He's also good with tharks.
This is a limited print for the San Diego comic con, if I recall correctly. Frank loves good old Edgar Rice Burroughs and has done a lot of Barsoom related art.

Pixar would do well to study Frank's work for their planned John Carter of Mars movie. I've heard that they intend to do it as a live action with cgi backgrounds and creatures, like Jacksons Lord of the Rings. I would really like to have high hopes for this movie, but I'm still afraid of disappointment. You know how often book adaptations manage to suck. We'll just have to wait and see. 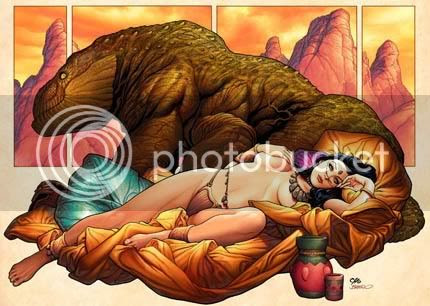 One more Frank Cho. Dejah and her faithful Woola
Dejah is described as having skin of a light red coppery color, but you rarely see her that way in illustrations, and that's too bad. The hot, exotic, alien princess should be as different as possible, that's what makes her hot and exotic.

Just as an aside, I visited Io9, the scifi news site, awhile back and they were discussing the Pixar movie. There was a comment thread conversation going on, and it really drove home to me just how far removed from my own point of view, the modern syfy consumer has become.

Most of the thread was posts explaining how Burroughs John Carter was an example of the patriarchal, colonialist, imperialist narrative, and the others were posts agreeing with them, and patting themselves on the back for being so enlightened.

Apparently, John Carter is a racist because he's a white man who kills red and green people. I'm not pulling your leg here. I don't have a link anymore, it was a while ago. You can go and dig for it if you like. It'll just depress you though.

I suggest you instead roll up some new characters for your pulse pounding adventures on Mars!
Fierce white apes, brutal green men, exotic alien princesses, and flashing sword play awaits you!
Posted by E.G.Palmer at 7:49 PM

Cool Stuff, Thanks for posting this!

You're welcome, Al! I've built up a folder of sword and planet related art as inspirational material since I've been working on an OSRIC based rules expansion just for Flash Gordon/John Carter style play. I'll post more such stuff in the future.

Neat art, didn't know there was much Barsoom art out there. I'd love to get involved in playing on Barsoom. Has someone already put together a rules set/adaptation for that?

Well met, Baron Greystone, Dejah Thoris is a subject for a surprising number of artists out there. She and John Carter seem to be often requested as subjects for art at comic cons and commissions. I love to trawl the net for Barsoomian art and related sword & planet stuff.

http://www.comicartfans.com/ This is a site that has an enormous amount of comic book,and other art. You can put just about any character or artist in the search bar and get hundreds of images. Check it out!

Prepare to be horrified fellow sword and planet fans by the anaemic and whiny rendition of the alien princess soon to hit the big screens.