And now for something completely different.

After fighting with blogger for four hours, I had to admit defeat. For some reason I don't understand, it just won't publish my stat column in the arrangement I have it in Word. This is only one battle though, not the war. I'll get it to do what I want eventually.

Anyway, I thought I would bring some photos over from my woodworking blog, since the subject matter over laps with gaming in this instance. At least, it has to do with the pulp magazine roots of the game. And with book storage, I know none of us has enough book space.

This is a bookcase I built as an experiment, to work out the idea. It has flat panel sides, and I put pulp magazine covers in the panels to make it powerful visually. They aren't actual magazine covers, I'd never cut those up on a trial piece. These are scans that I cleaned up and shaped in Photoshop, and then printed on iron-on transfer material. The transfers I actually ironed onto a backing of nice and dry 1/4" plywood.

I just picked out a semi random assortment of interesting covers of magazines and books for this first one. I have plans to make some more with various themes to them, fantasy, science fiction, Dungeons & Dragons. I may save the D&D theme for a big bookcase/cabinet with doors so that I can put classic game art in all the door panels. It's iffy that I can get away with that though, my wife requires that I make her something she likes for everything I do that I like. I'd have to build her something pretty good to get away with a D&D theme case large enough to hold my collection. 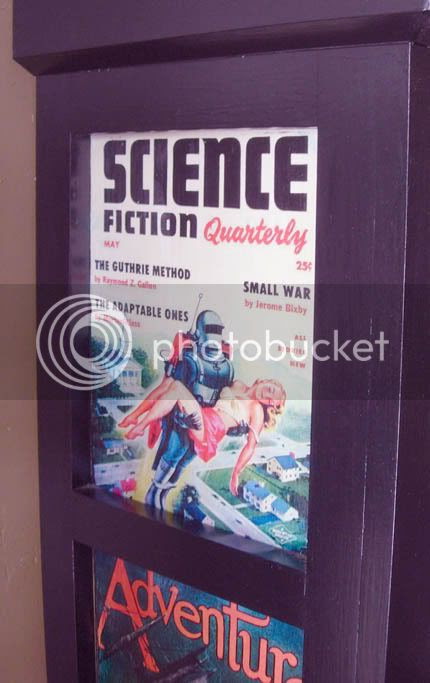 Here's a close up of the top left side panel. Science Fiction Quarterly was a late compilation mag. You have to love the illustration. Rocket suit and scantily clad girl, that's science fiction there, man. The bottom image on that side is The Dragon #1, so there's a little gaming in there. Above that is the J Allen St John cover of All-Story Weekly featuring Thuvia, Maid of Mars, then an N C Wyeth cover for Legends of Charlemagne,and an issue of Adventure, with a great full-rigged sailing ship.

On this side, the bottom cover is JRR Tolkien's drawing for the Hobbit cover. I really like his watercolors. Then you've got an old Collier's cover, a nice Planet Stories, The issue of Black Mask which featured The Maltese Falcon, and N C Wyeth's cover for Treasure Island.
I just gave this piece a few coats of a nice black satin, and then a couple layers of satin polyurethane.
I have some ideas for gaming furniture, and when I get some built, I'll post them here, as well as the wood working blog. Everybody has done the ultimate gaming table thing to death, so I was thinking of other pieces. Chests, end tables, and bookcases that actually are useful furniture above and beyond the game related functions, and wouldn't be objectionable to your understanding, but non-gaming spouse. I have one.
Let me know if you guys have any ideas, or wants on the subject. I'm not adverse to building stuff for my gaming brothers. Or sisters.

"For some reason I don't understand, it just won't publish my stat column in the arrangement I have it in Word."

Well thar's yer problum! Blogger is probably choking on all the bizarre and semi-nonsensical cruft that Word inflicts on its HTML output.

What was the format supposed to be? Just a simple, two-column table? No fancy formatting or anything?

Yeah, I had it as a two column table, with a three letter wide open space between them. The problem seems to be that I had them aligned from the open space left and right, so that the outsides are not even, and blogger dosn't like that.