Strangler Crows, or, Hey, look Blorfindel, that bird's got a rope! 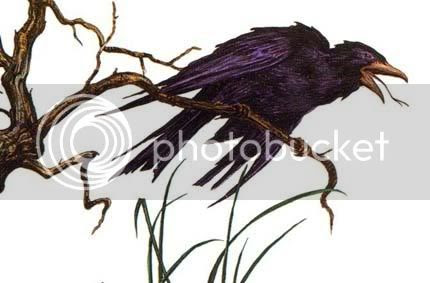 Blame for the existance of these malignent birds is often laid at the taloned feet of Corvekli, the infamous murder wizard. It is unknown if he created the foul things, or simply found and taught them. What is understood is that the gravediggers fear no lack of work where strangler crows fly.
Strangler crows get their name from the method of their special attack. The birds are always encountered in pairs as this attack requires that they work in conjunction.
The birds carry a length of rope or a cord, or sometimes a scarf of at least eight feet. When they find a suitable victim in the open, the crows fly directly at him at throat level, with the cord stretched between them. They cross paths behind the target and fly with all their might straight up.
Strangler crows are unnaturally strong for their size. A pair can easily lift an elf-size or smaller victim to his toes, if not off his feet entirely.
Two pairs working together can hoist a large man in the same manner.
If the crows act with surprise, and score a successful hit, the victim has a number of rounds equal to half of his constitution score to free himself of the garrote before he passes out from lack of air.
Should they manage to murder a victim successfully, the crows will loot the body of any small valuables, and probably eat the eyes.
Such loot as they obtain, the crows trade to willing humanoids, or others who are able to provide them with the delicacies they crave.


The art is clipped from a larger illustration by Ciruelo Cabral.
Posted by E.G.Palmer at 2:06 PM