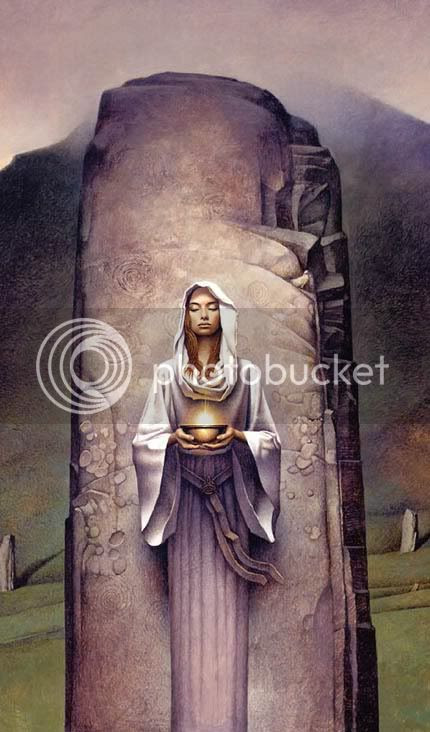 This pic is by John Jude Palencar, but I'm afraid I don't know it's name. I assume it was done for a book cover. I don't know what book either, but it gave me an idea!
Wooo Hoooo!

As a dryad is to her tree, a stone woman is to her standing stone. In any place where ancient megaliths stand, there is the possibility that a stone woman dwells within one.

A stone woman will be pleased to converse with anyone who is polite, and properly deferential. The tremendous, possibly immortal, lifespans of these creatures of nature endows them with the knowledge and wisdom of many mortal life times. On matters concerning the history and inhabitants of the lands about her standing stone, a stone woman may be treated as though she were a sage. Would be conversationalists are warned, however. Those who find speaking with an Ent to be trying, will likely be defeated in attempting to gain information from a stone woman.

In addition, a stone woman may discern the history of any object made of a natural material which she is allowed to hold.

A stone woman will appear to be a tall, human, or elf-like woman, of cool, statuesque beauty. She will often be revered by the local people as a giver of wisdom, and consulted on matters of importance. They will bring her gifts which may be buried near her stone, or left upon it.

A stone woman will never initiate combat, but if such is unavoidable, her slim hands strike as though made of stone, and her strength is equal to that of a hill giant. Non-magical weapons will be unable to cause her damage. As a last resort, a stone woman can meld with stone, stepping back within her standing stone to safety.

I really love the flavor this conveys. Very well done!