Death Grippli, or, What in the Nine Hells is wrong with that frog?! 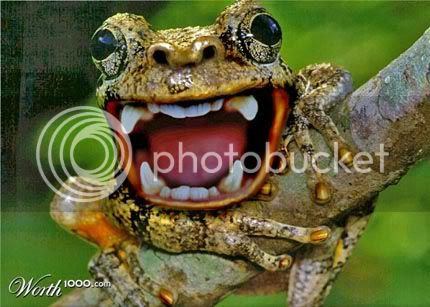 I ran into this lovely image whilst trawling with my Inter-net at Worth1000. I thought to myself, man, that's an angry frog.

Most often encountered on the outskirts of a community of normal grippli, Death grippli are believed to be victims of a peculiar, amphibian rabies. The disease causes madness, which increases the grippli's strength, while also causing it to develop heavy, blunt, tusk-like teeth. The grippli is also seized by insane rage, and driven by constant, gnawing hunger. Without fail, a Death Grippli will immediately attack when encountered.

As they are no longer intelligent enough to use weapons, they attack by biting only. Leaping from concealment as soon as a target presents itself.

A successful hit indicates the Death Grippli has clamped it's jaws around the target's throat. It will then use it's sticky hand pads, and it's lunatic strength to hang on. Once it has bitten a target, a Death Grippli will not let go, instead, grinding and chewing for a further 1-6 points of damage per round until it is killed. Only death will cause it to release it's grip.

Death Grippli are silent, except for the odd croaking-trilling vocalization they make once attached to a victim. Few who have heard that sound, "AHMMM-NAHMMM-NAHMMM!" , have lived to tell of it.

* I defaulted to standard AD&D stats for this one, cause I'm tired, and I didn't feel like messing with the html.