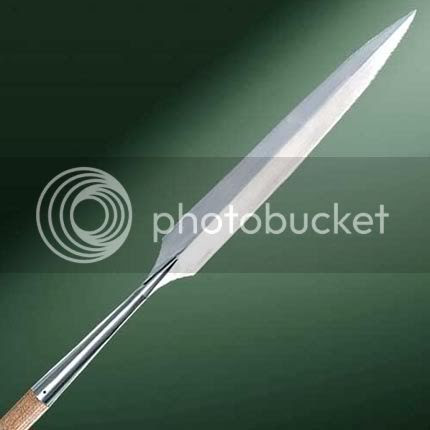 In my folder of old characters, I have a chaotic neutral human fighter that I used to run named, Maeglyn the Bastard. Maeglyn had joie de vivre, and while something of a loose arbalest, and liable to kick in doors without prior consultation with the party, usually came through for his comrades.
He didn't get killed, just sort of fell out of rotation.
Anyway, I had Maeglyn use a hewing spear as his primary weapon. The hewing spear is a weapon that is referred to in the sagas, but no one is sure what it looked like, or exactly how it was used. No original examples have been found.
The above pic is a spear head made by Museum Replicas ltd as a theoretical reconstruction. It's got a 16" blade that can be used in a slashing or chopping attack, as well as the normal thrust.
It's nearly a short sword on a pole.
The spear in all it's forms has been the weapon of choice for most of history.
It's easy to use, it takes less time and material to make than other weapons, and it gives the user a longer reach than the sword or axe. A spear is also a multi-attack weapon, it can be thrown as a missile weapon, as well as used hand to hand. With a good butt cap on it, it can be used in lieu of the famous ten-foot-pole as a probe or a door spike. There's just no end of things a good spear can be used for.
The spear never seems to get much love from D&D players though, Maeglyn was the only character played in the group that used it. Everyone always wants to be the mighty sword-wielder, or the brutal axe-man.
I've been thinking about ways to maybe make the use of a spear more interesting. I don't know if I'd actually institute any of these ideas in the game, I think if you start detailing weapons too much, things get overly complicated fast.
I think I might try a rule letting a spear wielder always strike first in the beginning round of a melee, provided he is not surprised. This would be to reflect the fact that the spear head is already halfway between the attacker and defender to begin with.
Or, I thought I might let a spear-wielder who is in retreat, or defending only, to use the spear to perform a Stop-thrust that halts an attackers attempt to hit, if the defenders Dexterity is higher than that of the attacker.
I think I'd have to assign a standard Dexterity to all humanoid monster races though, or maybe just throw 3d6 to get a quick dex rating for each attacker on a case by case basis.
Or, You could have a spear hit on a natural twenty mean that the target has been transfixed or impaled, and if not killed out-right, must spend the next round attempting to pull itself off the spear.
I think, that something like these rulings, combined with Trollsmith's great shield rule ideas, would make the spear and shield combination a more formidable duo, and push this classic pairing back to the forefront of combat where they belong.
At the least, it would make henchmen and accompanying men-at-arms a more potent threat
What do you guys think? Any suggestions?
Posted by E.G.Palmer at 8:33 AM

I play Tunnels & Trolls (where rampant weapon details are de rigueur) and plan on writing such a spear up. I do like the giving first attack for reach option, also the
guarded retreat - I imagine that I'd give a green flag to any player that came up with any of these techniques.

That's interesting, Ragnorakk, I don't have any experiance with Tunnels & Trolls, though I've heard about it. I just have the hewing spear doing 1d6 dmg due to it's larger size, but I haven't actually attached other rules to it in play yet.

Excellent food for thought. I am going to write up some house-rules on this.

Let me know what you come up with, DuBeers.

hmmmm, yes, and that could work both ways, couldn't it? Hobgoblins would be disciplined enough to attack in ranks in a tight corridor.

Disarm, Set to Charge, and Tripping both saved my 2e Bard in, Against the Cult of the Reptile God.