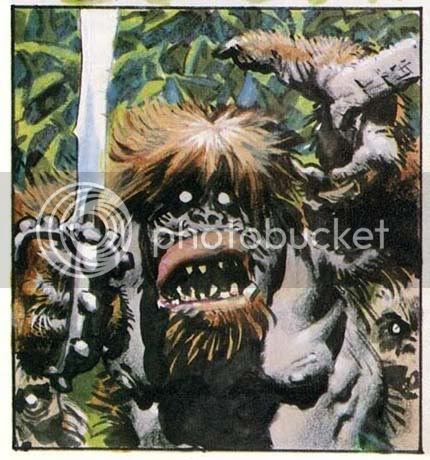 Vague and conflicting tales are told concerning the origins of the militaristic goborillas. Some hold that they result from ship wrecked goblins joining with the great gorilla tribes of the Green Fever, others say goblin pack-ape trainers trapped below ground became somewhat too close to their beasts. A cursed artifact, a vindictive Godling, and the usual mad wizard are also blamed.

Though they may be entertaining tavern talk, the truth of these tales is unknown, and also largely irrelevant to any who find themselves facing the war-like goborillas.

Well organized, disciplined and orderly, the militant goborillas appear to be few in number. There are rumors that this is a subterfuge, that great numbers of the creatures drill constantly in the barracks-caverns they have bored through the jungle shrouded tepuis of the south lands.
Some also say the creatues are unfolding a great battle plan that will see them shuffle-march out of the south one day to beat their chests and roar over the ruins of civilization.

Few who meet with the goborillas ever return, so, the facts of the matter are uncertain.

Settlements of other races which intrude on territory claimed by the goborillas are always destroyed without warning. Usually in the dead of night. There are never survivors, or else, the survivors are taken away to a mysterious fate.

Goborillas are powerful creatures, appearing to be either ape-like and very hairy goblinoids, or malignant gorillas with goblinish features. They normally march on their feet like men, but are capable of moving with great speed for a short time by knuckle running as do the great apes.

They are normally encountered in multiples of six. This is the standard squad the soldierly goborillas deploy.
Each squad is commanded by a Silverback. Silverbacks will have 1 extra hit die and carry a two handed cleaving sword, (2d8 dmg).
The other goborillas of the squad will carry scimitars, staff-slings, powerful short bows, pole arms and darts or javelins.
There is a 50% chance of some sort of armor, usually some sort of splint armor. The making of mail is beyond the goborillas skill.

* The pic I clipped out of a Tarzan story illustrated by the mighty Richard Corben.