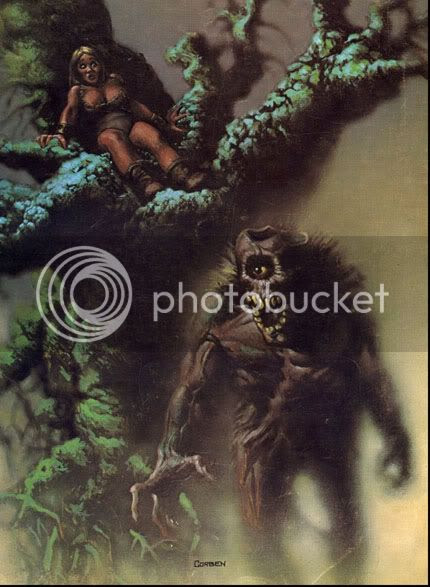 Spontaneous Generation is the theory that life can arise spontaneously from non-living inanimate matter, or that one form of life may be generated by another unrelated form.

The classic example is the notion that dead meat itself creates maggots spontaneously. Other forms of the theory allow for life to arise from lifeless matter by the power of the sun, by the "Vital Heat" contained within all matter, or by many other igniting factors.

A sort of unnatural selection. Heh...

This theory held from Aristotle until well into the 18th century before being finally pushed aside.

In my own Greyhawk, Spontaneous Generation is a fact. It is also modified, and altered, and distorted by the existence of magic, the will of the Gods, the meddling of infernal intruders, malignant emanations from the underworld, or the black spaces between the stars, and DM Fiat.

This is how I justify to myself the existence of so many monsters and sentient races on a single world. It is in the nature of Greyhawk itself to constantly churn out new life forms. Most of them are only single examples, and fail to found a species. These are my Monsters, with the capital M.
The creatures that do manage to continue themselves with offspring become the regular monsters, (little m), and other creatures of the gameworld.

I've got a little list here of modifying factors which influence the likelihood of any particular corpse spontaneously generating a new living thing.
This isn't a hard and fast rule, I may just say, "It is so!". It is always fun to roll some dice though, since you never know what'll happen.

Whenever something dies in the game, I check to see if there's a chance of a new creature being spontaneously generated. These percentages are cumulative.

This new Monster may or may not be able to breed with other creatures to found it's own line. That's up to you.

As an example, lets just say that Gneerg the goblin footman of the Vampire lord is slain along with his master by our band of intrepid adventurers.

Lets say Gneerg got himself zapped by the same lightening bolt that did in his Master. And also maybe sprayed with vampire blood and ichor. Just after downing an invisibility potion in an attempt to escape.

If the dice are feeling generous, or if you just decide it will be so, this combination of factors causes the spontaneous generation of an altered goblinoid some few weeks later.
Maybe it's an adult to begin with, or maybe it starts as a grub and metamorphoses into a larger creature later.
I think in this case, the spontaneous goblinoid will have vampiric abilities, and to make it weird, I'll have the nails of it's hands become long hollow fang-like blood syphons.
Maybe this thing is just a one-off, maybe it reproduces and becomes a pox on the gameworld.

This is just a thing I like to do to maintain some feeling of verisimilitude to the natural world of the game setting, while still allowing for the existence of the weird and freakish.
It also lets me keep everyone on their toes. It codes into the rules the idea that the DM is totally within his rights to throw unknowns at the players.

Just as Greyhawk is selecting for the best possible monsters to inhabit the game world, it's also deselecting the player characters who fail to show the survival traits needed in a worthy adventurer.

Survival of the Fittest just cracks me up.

*edit, that pic at the top is a clip from a larger Richard Corben illustration from 1971, fyi.
Posted by E.G.Palmer at 7:38 PM

This is an excellent concept. Allow me to be the first to say "YOINK!"

Oh, now I've got to take that one. It makes utterly perfect sense.

This is also my explanation. Magic could even drive a process similar to photosynthesis that would allow for an unexpected richness of life underground.

This is proved experimentally by the spontaneous generation that happens in the back of our fridge. Must be a Ley Line back there next to the coils.