The Black Fleet Campaign. The Federation Council has made its decision; Starfleet will just have to look the other way. 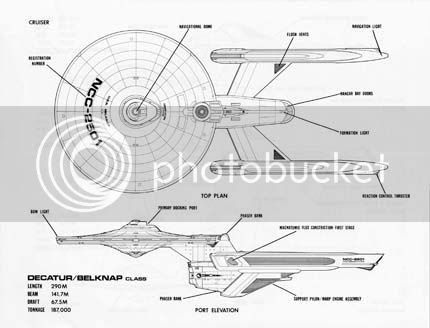 This is an idea for a Star Trek game I’m dusting off to have as a second counter point game for the Wyrd Greyhawk campaign. I wrote up part of this along time ago, but never got the chance to run it. I didn’t even have a set of rules picked out for it at the time.

I’ve got a stack of old Starfleet Battles materials, but none of the actual Star Trek rpgs, so I’m open to suggestions regarding the best rules platform to use.

I’m a big fan of Original Star Trek and the movies, I also very much like the Next Generation, but its unending group hug-we’ve all evolved past our petty human foibles posturing gets pretty cloying in my nostrils after a while.

Deep Space Nine was a breath of realistically fallible air. The series was populated by interesting characters that had ideals to try and live up to, but were faced with situations beyond their control which often force them to make the hard decisions. DS9 actually was the sort of “edgy and mature” science fiction series that the current crop of script writers can’t seem to grasp. I think it’s necessary to have characters with at least some closely held beliefs and ideals to guide their actions. The conflicts between their desire to live up to those beliefs and their inner prejudices’, fears, and humanity is what gives a character life.

Contemporary Sci-fi TV writers mistake edgy and dark for random and pointless, they confuse adult and mature for dysfunctional and selfish.

But enough about Battlestar Gallactica and Stargate Universe. Budump-bump, ting!

The Black Fleet campaign is set during the Dominion War which played out during the second half of the run of DS9.
The idea is that the Federation, having been damaged so badly by the Borg even before the Dominion came pouring through the wormhole, is pushed so far to the edge by the war that they are forced by their lack of ships to scrounge for allies and assets anywhere they can.

To this end, the Federation Council, over the protests of Starfleet, decides to issue Letters of Marque and Reprisal to all takers willing to prey on the Dominion and its allies and suppliers.

The players would run characters who accept the Federation’s offer. They would be pirates looking for a chance to gain legitimacy, Starfleet dropouts, dishonored klingon warriors, renegade romulans, Cardassian resistance fighters, humans without a place in Federation society, Ferengi who have lost their business licenses, etc...

They would be given, or salvage for themselves, an old and obsolete ship which over the course of the campaign, they would have to use to their best advantage and upgrade as they can. As in my Wyrd Greyhawk AD&D campaign, the PCs are outmatched and must scrabble and claw and maneuver with cunning to survive and win against a superior foe.

Just as with a TV series, the campaign will need a large cast of varied NPCs, each with their own goals and desires. The PCs would be only a small part of the ship’s crew, and surrounded at all times by friends, allies, and enemies who are all more than they seem.
Few of their fellow privateers would be completely trustworthy. They would essentially be rival NPC adventuring parties in the parlance of D&D.

The ships of the Black Fleet would be shot through with undercover operatives of the various Intelligence Agencies of the quadrant’s powers. Starfleet Intelligence, the Tal’shiar, the Obsidian Order, Klingon Imperial Intelligence, Section 31, the Maquee, the Andorians, and others. Plus free agents, organized crime like the Orion Syndicate and agents of the Dominion.

I’d include a Starfleet liason officer NPC to accompany the PC privateers. His function would be to fill the shoes of the old wizard the PCs meet in a tavern. He provides adventure hooks in the form of information regarding Dominion operations, and those of their allies. He’s also suitably appalled by the motley crew of renegades he’s been assigned to oversee.

As privateers, the PCs goal is to enrich themselves to the detriment of the enemy by activities that would normally be piracy. Starfleet has to hold its nose and look the other way when its allies of necessity push the boundaries of their mission, but the PCs will be wise not to push too far. Starfleet captains sometimes find ways around orders they deem unfitting and no one is going to look too far into the disappearance of a ship full of buccaneers and spies.

The PCs will also have to deal with the ships of the other powers of the sector, and develop their own relationships with them. Imperial Klingon captains may well be willing to work with the privateers, unless some houseless dishonored klingon serves aboard the privateer’s ship.
Romulans never tire of their subterfuges and plotting and would likely find a use for the Black Fleet buccaneers in one ruse or another.

Along side the adventure and ship to ship combat, the point of the campaign will be to inflict the standard Star Trek moral conundrums on the ethically sub-optimal crew. The gaming idiom or universe automatically brings with it a lot of assumptions about what the characters are supposed to be doing in the game. Playing in the Star Trek universe comes with certain sensibilities instilled in the players by forty some years of established mythos built up by the series and movies. Try as they might, players in a Trek-based game will find themselves acting like Trek characters. I think this will be fun with old guard D&D players trying to balance their loot and pillage tendencies against their perception of what a Trek game should be.

I won’t make it easy for them.

* Plunder the fat cardassian freighter or rescue the Bajoran orphans before their ship falls into the sun?
*Lieutenant Daan informs you Starfleet Intelligence tells him there is a chance a certain ferengi vapor crystal smuggler is hiding on the bajoran ship.
*Kuvoc, the klingon engineer says the aft shield emitter is blown and will take three hours to replace.
*A quarter of the crew is suffering Rigellian Fever.
*The Vorta you’re holding for ransom just managed to send an unknown signal before he somehow fell down the turbolift shaft. Your cardassian navigator, who has absolutely no connection to the Obsidian Order, had nothing to do with it.
* Also, there are four Jem’hadar warships inbound and four minuets out.

I don’t know how ship to ship combat is handled in any of the various Trek rpgs out there, as I said, I’ve only got Starfleet Battles, and the original Traveller black box.

It always seemed to me that in order to make a ship to ship combat feel more like an actual Trek experience; you need to have each of the players really filling a function in the combat. I want to actually have them need to do their jobs in order to make the ship function. Having the player running the Captain determine all the ships actions in combat while the other players sit around and watch seems like the old method of having a Caller in D&D determining the party’s actions. Not involving enough for me, too orderly, not enough chance for wacky random loose cannon PC action.

I’m thinking about parceling out the energy allocation charts that SFB uses on individual cards for each of the categories/ bridge positions. The Player running the Captain would give orders, but the players running the navigator, helmsman, engineer, weapons officer, etc, would do the actual filling in of the energy allocation for each turn. If everybody doesn’t work together and actually know their jobs, the Captains plans and the actual events might not jib.

Then they’d pass them to me to determine the outcome of that turn vs. the enemy’s actions.
This would allow for human error in interpreting their orders and carrying them out. I think it would add some of that old guard randomness to the system.

Anyway, this is going to be the relief game for when the players need a break from Wyrd Greyhawk. I think I’ll have to start working up NPCs and random events charts as well as deciding on a system. I really don’t want to have to do a lot of modifications, so if anyone has a recommendation for a fast and loose Star Trek game system, let me know. 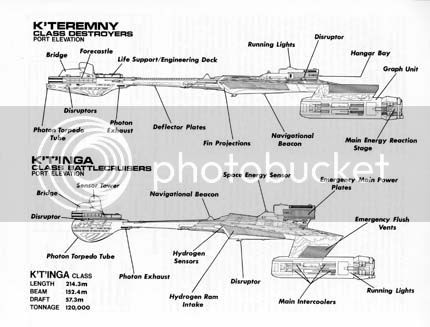 Ambitious! My gut tells me that if you want a Trek-specific system you should check out the Last Unicorn Games version.

Man, I would so love to play this. I have a soft heart for the old venerable D7a.

This reminds me of when we would play crazy scenarios using the FASA Starship Combat rules. I highly recommend them!

Contemporary Sci-fi TV writers mistake edgy and dark for random and pointless, they confuse adult and mature for dysfunctional and selfish.

-- and you beat me to the punchline.

Thanks,Gentlemen, I'm glad you like the idea! I love the Trek universe, it's so huge at this point, that I think there's room for just about any approach to a game in it.

Jeff, I just googled about for Last Unicorn Trek, and it looks like there is a lot of support for it on line. It does however use the term Narrator alot, and it has drama dice, so I'm a bit uncertain. I don't expect a death rate like AD&D for this, but I'm not wanting to hand hold PCs either.

Dr Rotwang, I had a head start on you. Budump-bump, ting!

Well, here are the rules I'd use if I was running this game:

Heh, I saw that post Zak. It's a clever system, but the thing I really thought was, you should paint Mandy green.

I look forward to more on this. :)

The old Trek RPG FASA put out in the '80s had an everyone-has-a-battlestation ship combat system like the one you describe, at least in one edition that I remember.

What I hated about it was, running the Science Officer PC, it was my job (among other things) to roll on the damage charts when we were hit. Never do that to a player! You may as well invite them to a metaphorical pillow party.

For my money the Decipher version of the game has the fast paced space battle action your are looking for. The FASA version on the other hand is the closest to the SFB combat.

ICON/Last Unicorn has a Steve Long unofficial supplement called Spacedock, which is a much more in depth starship combat and construction system.

So depending on your needs and desires, all three (FASA Trek, ICON/LUG Trek, CODA/Decipher Trek) are all excellent choices.

As an avid (read rabid) fan of RPGing in the Final Frontier may I suggest LUG's ICON system for more of a story telling RPG feel and FASA if you're looking for something close to SFB. For my money ICON by Last Unicorn is the interstellar Shiz-nit for Star Trek campaigns hands down and as AslanC mentioned their is Steve Long's Spacedock which is awesome.

Sadly I must disagree on Decipher's game as I found it to be too D&D like and after playing LUG's it feels somewhat like a knock off that most awesome game.

My blog has a lot of Star Trek RPG notes with a lot more to come as I too am starting a new Trek game soon.

See you on Risa!