The Strawman, or, "I know it's not the real enemy, but I can't stop attacking it!" 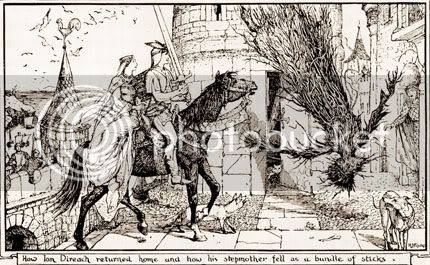 Reading through this and that game forum and blog lately, I've been entertained by the long standing conversational ploy of redefining the other side's point of view and attacking them for positions that they don't actually hold, so as to divert attention from the weakness of your own theories. I don't do this myself, at least not consciously, heh... But I do have fun looking for where exactly is the point where the bullshit begins.
When I'm out in the shop, I switch back and forth between Rush Limbaugh and National Public Radio. If you want to understand whats' actually happening, you have to seine out the lies of both sides to collect the little nuggets of truth.

But, that's neither here nor there.

When I ran into this illustration by H.J.Ford at another art blog I like, The Pictoral Arts, It pulled together the idea for a new monster/construct.

Frequency: Very rare
No. appearing: 1
Armor Class: 2
Move: 14'
Hit dice: The strawman has hit dice equal to the level of it's creator. It has hit points equal to the hit points of it's creator.
%in lair: 100%
Treasure type: nil
No. of attacks: 2
Damage/attacks: 1-4, or by weapon or magic item
Special attacks: fixating charm
Special defenses: nil
Magic resistance: standard
Intelligence: non. The strawman is an automaton
Alignment: Neutral
Size: M
Psionic ability: nil

A strawman is a golem-like construct with a single purpose, to prevent assaults on it's creator from striking home by making itself the focus of all attacks that would otherwise be directed at the strawman's maker.

Once finished, the strawman will appear indistinguishable from the magic-user who made it. A strawman is normally stationed in a mages inner sanctum, laboratory, or bedchamber to serve as an expendable guardian of last resort.

The strawman will immediately move to interpose itself between intruders and it's maker in the event of a hostile invasion of the magic-user's domain. Any intruders who lay eyes upon the strawman must save vs magic at -3, or fall under a glamour which causes them to perceive the strawman as the real threat and direct all attacks against it to the exclusion of all other targets.
For it's part, the strawman will do all it can to keep the attackers hostility aimed at itself. It will rant and scream and threaten and play the part of the cornered sorcerer to the hilt.

The strawman will do what it can to draw out the length of the combat in order to give it's maker time to escape unnoticed. Should any attacker succeed in saving against it's charm, and perceive the strawman for what it is, it will direct all it's attacks at that character in order to prevent him from breaking away to pursue the real wizard.

A strawman will often be armed with a magic dagger, and a wand, or some other minor magic item.
When a strawman is destroyed, it reverts to a manikin of sticks and straw and the glamour is dispelled.

It is rumored that the spell needed to create the strawman is known to the great Eneg Remlap, and that he keeps it written within his Weighty Tome. Whether or not he may be convinced to share it in the future is a thing unknown.


Here is a link to the Pictoral arts blog, lots of good stuff there. http://mydelineatedlife.blogspot.com/
Posted by E.G.Palmer at 6:00 PM

Ha ha ha. This is great, especially with your introduction.

not only funny, but an actually usable creature! good job!

Thanks guys, I'm glad you like the strawman. May he allow all your favorite antagonists to escape their just desserts.

James, I really like your ZIP game, and I'm looking forward to Rookhaven!