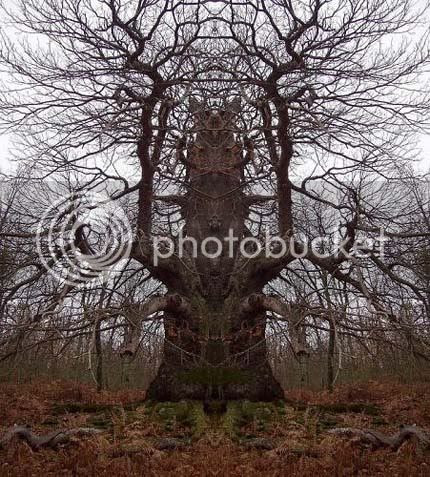 As the great treants appear to exhibit the attributes of both men, and trees, being man-like in form, but tree-like in appearance, so does the Dragonwood combine the features of trees and dragons. When a dragonwood is unmoving, it is indistinguishable from any normal tree in the forest. It may appear to have a strange, or twisted and gnarled form, but it's true, dragonish shape will not be revealed until it decides to move.
At this point, it is often too late. A dragonwood is ill disposed to any who intrude upon the stillness of it's glade.
An active dragonwood is seen to have a serpentine shape with four legs, a long neck and tail, and a heavy dragon-like head with long jaws filled with teeth of polished wood. These teeth are no less hard than the teeth of any true dragon, and no less dangerous. Covered in ridgy bark, branches, and leaves, the dragonwood has primary branches which appear to be wings, but it cannot fly. Instead it raises it's wing branches over it's head when it wishes to sun itself, or appear as an ordinary tree.

A dragonwood does possess a breath weapon of sorts. Three times per day, it may breath forth a hail of dart-like wooden splinters from within it's throat. The splinter hail takes the same cone shape as the breath weapon of a red dragon. The splinter hail will do damage equal to the dragonwood's current hip point total. PCs wearing plate mail, or better armor will only take half damage, and saving vs dragon breath will halve that damage again. No lesser armor will do the same. The splinters are driven with great force.

A dragonwood may be capable of speech, and may, or may not be willing to engage travelers in conversation. The life span of a dragonwood crosses many thousands of years, however, and those unwilling, or unable to spend the proper time in adequately conveying their meaning may be judged as being, "hasty", as they might be so judged by a treant. A treant, however, is not likely to eat a hasty creature, whereas a dragonwood is likely to do just that. 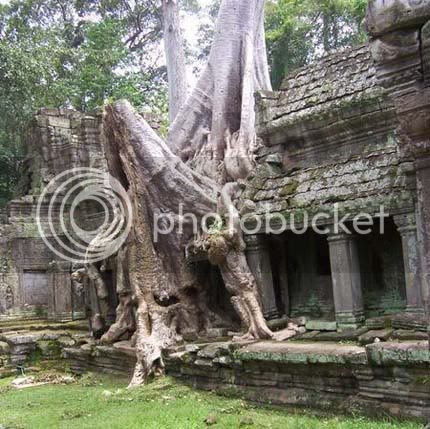 A dragonwood not actively engaged in some pursuit will simply freeze in a comfortable position and enter a meditative dormancy. It is still aware of all that transpires around it, and may return to full awareness and action in a moment. If the actions of lesser creatures in it's immediate area are not in anyway inconveniencing for the dragonwood, and it is not hungry, it is likely to remain motionless and undetected, content to ignore the ephemeral, squeaking things.

If a dragonwood has the capacity to employ magic, it will be of the druidical variety. 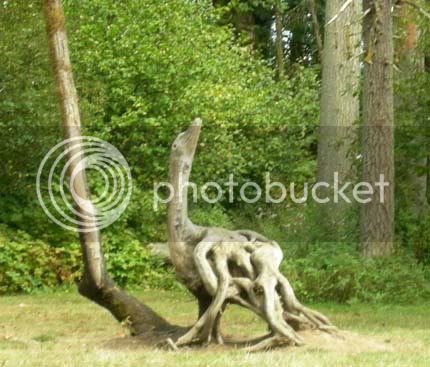 Dragonwoods do not seek treasure. They will, however, keep items which they find pleasing in some way. These things they will display about their glades by hanging in trees or placing on stones where they may contemplate them while they enjoy the sun and the soil.

A very nice addition to the bestiary. Love the dragon/tree simulacrum photo. Now, a wizard's staff made from dragonwood! That might be something worth questing for... :-)

That's very cool! There's something subconsiously terrifying when it comes to scary trees...

There's something subconsiously terrifying when it comes to scary trees... Second, only to corn. Although we had a couple of yews in our yard that were vicious enough to bust up my chainsaw.

This dragonwood thing is groovy.

Thank you, gentlemen! Perhaps a staff of commanding dragon-kind could be made from a dragonwood limb?

You don't have to tell me about corn, I'm in the middle of Indiana. I'm just glad there was no, Children of the Soybeans movie. Though, I suppose they'd have to be evil yard gnomes or something.

I used this for my first non-rulebook haiku. The haiku doesn't do justice to your masterpiece, but I do it (as I do most things) to entertain myself.

My players will have a very interesting time of it the next time they go collecting firewood. The dragonwood is simply excellent.

Thanks, Rusty! you're very kind. I'll try and come up with something special to kill your players.

Interesting, but I'd go a little further than just "DRAGONTREE!"

Namely, it eats fire and buries corpses it's roots. If adventurers camp near it, they will find as soon as they build their fire good and hot, that it begins to dim, and then die. If they, say, try to burn the Dragontree, the sparks or firey oil or w/e will simply be absorbed. When the Dragontree is starved of fire, it will turn to the heat of living blood to sate itself, piercing victims through and then using druidic magic to heal them and keep them alive while it feeds off their heat, until they are slowly starved off oxygen - as this happens, it will lignify the remains; in the event of a brushfire, these lignified remains may 'hatch" dragontree pods/seeds.

Oh, and it kills adventures with splinterbreath and dragon claws and whatnot, that too.