Beware the Gravediggers, or, "For Pelor's sake, they're only armed with shovels, how dangerous could they be?" 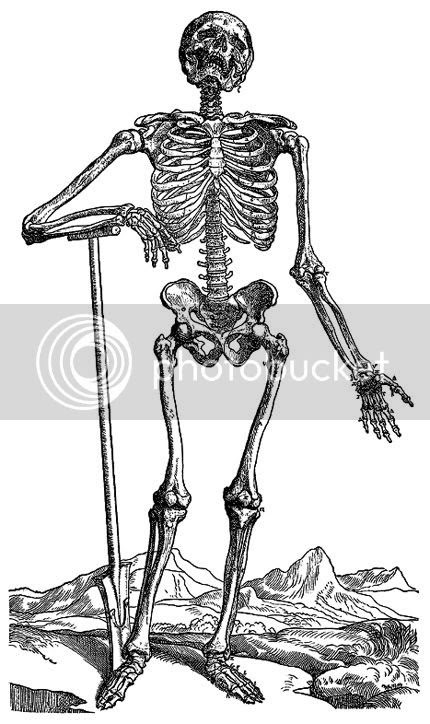 A specialized type of undead skeleton, gravediggers are constructed to serve as keepers and guardians of graveyards and mausoleums.
Serving as both it's weapon, and it's tool, a gravedigger carries a long-handled spade, or shovel. When attacking, there is a 50/50 chance, per round, of the gravedigger employing either the edge of it's spade in an overhead, axe-like stroke, or using the flat of the shovel as a bludgeoning weapon.
The standard 1 in 6 chance of a blow being aimed at the head of an un-helmited target applies, as the gravedigger is considered, non-intelligent. Should a gravedigger successfully strike a PC in the head who is without protective head gear in an attack with the flat of it's shovel, the PC must roll 1d20 and score less than his constitution stat, or be laid out insensible for 1d4 rounds.

Any characters killed in combat with the gravediggers will be buried by them after the fighting has ceased. One month later, they will be disinterred, and rise as a new gravedigger, doomed to join the work-gang and keep the graveyard for eternity.

Gravediggers are most likely to be encountered either singly while doing some form of maintenance among the headstones and monuments of their graveyard, or in a group patrolling the graveyard, or digging a fresh grave. If a group digging a grave is encountered, then only one gravedigger will actually be doing the lion's share of the work, while the remaining skeletons stand about in poses of disinterest and lean on their spades. All will immediately move to attack when perceiving intruders.

There is one report of special interest to adventurous souls that I feel I must pass on. It is said that the great Garden of Serenity, the league wide graveyard which surrounds the White Shrine of Nerull, is patrolled by a "Funeral March" composed of gravediggers, standard skeletons, and bone minstrels. The march only takes place at night, bearing torches and slow-stepping to the beat of the mournful dirge the bone minstrels perform. The dirge differs from the reel which bone minstrels normally play in that those who hear it and fail to save, must join the funeral march instead of dancing.
Those who join the march, are doomed to walk the graveways forever unless freed before they die of thirst and starvation.

Gravediggers have all the attributes of standard skeletons. They only take half damage from edged weapons, are immune to Sleep, Charm, Hold, and cold-based spells. Holy water causes 2-8 points of damage, fire causes normal damage.

*Gravediggers do not collect treasure. However, they do collect any objects they find in their maintenance of the graveyards and deposit it in a central location. Usually a keeper's shack, or empty mausoleum.
Posted by E.G.Palmer at 9:36 AM

Very nice. Poor bastards - talk about no rest for the weary!