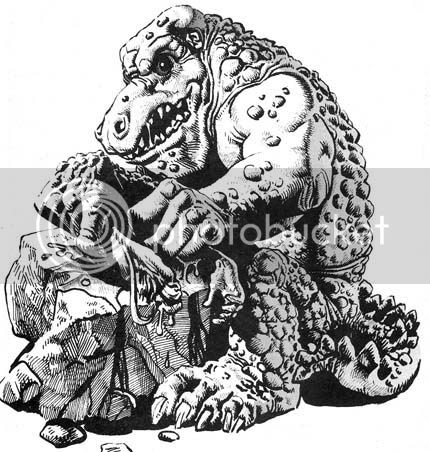 Men concoct stories and tales in order to explain those things which frighten and mystify them. The tale told concerning the Trobold is this.

Long ago, a tribe of kobolds, driven from their lair and starving, encountered a lone troll. In an act of desperate hunger, they attacked it en mass. Though many died by the troll's fearsome claws, the great numbers of the kobolds won out in the end, and the troll was dragged down and devoured.

As Istus would have it, the feast-troll was no common creature, but a valued, if not loved, shaman of Vaprak, the malignant god of trolls and ogres. As punishment for destroying his servant, Vaprak willed that the surviving kobolds would take on the characteristics of their victim, and also, they would be filled with a lust for the flesh of their own kind.

This curse was tempered somewhat by the intervention of Kurtulmak the kobold Deity. Though unable to undo the work of Vaprak, Kurtulmak altered the nature of the ill sending so that all sentient creatures, and not only kobolds would suffer the hunger of the trobolds.

This story may be so, and it may not be so, who can say?

What is so is this, Trobolds are horrible cannibals who must devour the flesh and gore of thinking beings in order to survive. Though they may torture and eat animals for the pleasure of doing so, only the meat of creatures which think and talk will nourish them.

A trobold has no interest in parley, and will attack on sight, continuing to fight unless obviously over matched, or victorious.

A trobold's first move in combat will usually be a gusty belch of it's vile slaughterhouse breath. This affects a 10 x 10 foot space directly in front of the monster. The horrid reek of old blood and meat will cause revulsion and nausea to any who fail a save vs poison. This will cost them 1 round of action, allowing the trobold to close and attack first in the following round.

If grievously wounded, ( more than 3/4 of it's total hit points), and without hope of victory, a trobold will seize the bodies of any slain enemies, and attempt to flee.

On occasion, kobolds may allie with a trobold for a raid, or employ it as a guardian if menaced by more powerful enemies. So long as the trobold is supplied with fresh meat, the kobolds will be safe. Should the stream of victims run out, however, kobolds will begin to disappear.

* The pic I used for the Trobold is by the mighty Richard Corben. I clipped it out of a larger 1971 image he did as an add for Fantagor. I ran across the pic on Golden Age Comic Book Stories, posted by the also mighty, Mr Door Tree.

Nice picture and a great interpretation! Definitely using these.

Thanks guys! It warms my cold DM's heart to know my monsters will be out devouring the player characters of other game worlds.

I had to do a search as my very first d&d campaign I was transformed into a kobold. And bit by a “weretroll” this becoming a Trobold. This was back in 2002! I am happy to see Trobolds exist outside that campaign!