Hextor's extra balls! That's not a dragon, it's a Dragosaur! Run! 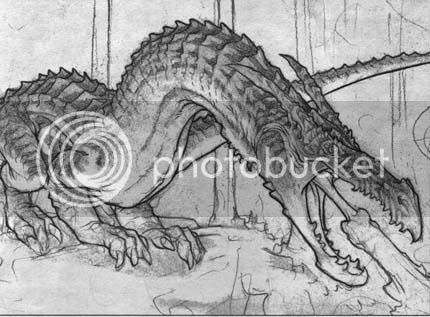 Here's a nice sketch from an artist named Mitch Byrd, about whom, I know nothing. I really like the work though, so, there's that. I'm, of course, horking it for another monster.

Dragosaurs are thought to be the ancient progenitors of the many, contemporary races of dragons that inhabit the world today. The truth of this relationship is uncertain. Certainly, it can be said, however, that any party of adventurers confident of their ability to deal with a dragon, will be unprepared for the ferocious, direct, and unrelenting assault of a dragosaur.

A dragosaur is wingless, but moves swiftly over rough terrain. It's great size, half again to twice the size of most dragons, allows it to clear, or brush aside nearly any obstacle.
A dragosaur will immediately rush to attack any lesser creature intruding into it's territory, and in the mind of a dragosaur, all other creatures are lesser, and where ever it may be at the moment, constitutes it's territory.
Dragosaurs will always prefer to fight with tooth and claw. They exult in their power to destroy opponents physically, only if sorely pressed will they resort to their area effect, or "body" weapon.
A dragosaur does not have the dragon's breath weapon, which of course, a dragon can direct where it will. Instead the body weapon of a dragosaur manifests as a ring-shaped pulse of magical energy which the dragosaur emits in all directions. This energy rolls out from the beast's body and transmutes into fire, cold, electricity, or an acid mist, upon coming into contact with any object, living or not. There is a 25% chance for the energy of the body weapon to take each form, and this is rolled randomly,( on a 1d4 ), each time it is used.
No matter which form the weapon takes, it does damage equal to the dragosaur's current hit point total. The ring expands to a total of 100 feet from the creatures body, and may be used twice in a day.
A victim may save vs breath weapon for half damage.

A dragosaur may not use spells, but it remains a creature infused with magical energy. The effect of this is that there is a chance of a spell failure anytime a spell is cast in the vicinity of one.
There is a base 45% chance of a spell failure within 200 feet of a dragosaur. This chance lessens by 10% for every level above 10th of the caster. Should a spell failure be indicated, roll a 12 sided die. 1-4 indicates the spell simply fizzles out, 5-9 indicates the spell feeds back on the caster, with DM determined effects, 10-12 indicates 1d4 other random spells the caster has memorized are lost.

Dragosaurs are usually only encountered in, "Lost Land" type settings. They fearlessly hunt all other creatures in their domain and are usually unchallenged. Even the greatest carnosaurs will avoid a dragosaur when possible.
A dragosaur will hoard treasure as would a dragon, but it is less interested in gold. Territory and food sources are things of greater value to a dragosaur.

Thanks, my players just so happen to be currently in a 'lost land' type place...

Yeah know, Norman, I though, "crap, I should have painted out that breath weapon!", just after I posted it. dang.
Also, Hextor's got extra arms to make him more potent, so, it stands to reason....

I can't decide which I like better... the monsters or the exclamations that come with them.