Meet the Fool Hammers! A party of NPCs to bedevil your players! 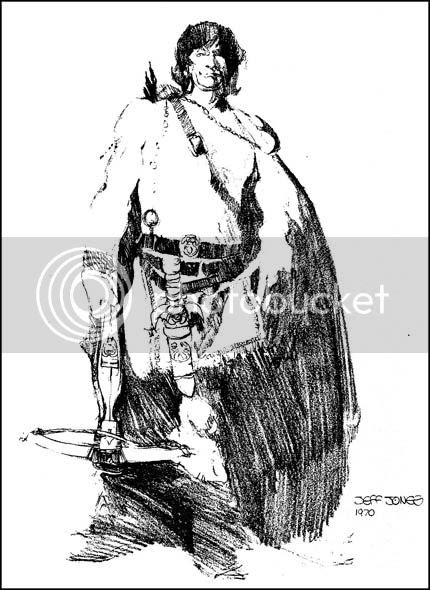 The Fool Hammers are an NPC adventuring party who specialize in preying upon their fellows. They consider those who risk their hides fighting monsters for gold to be fools and deserving of being plucked like chickens. The Fool Hammers employ many stratagems. Ambushing weary adventurers returning to civilization, weakened by hard fighting, and burdened with treasures, is their bread and butter.

Ludovir and Eilisceenia frequent taverns, inns, stews, or any other place where they might find likely marks. The other members of the Fool Hammers are less able to pass themselves off as trust worthy good fellows.

They befriend those who speak of planed expeditions and use drink and flattery to learn more. Depending on their assessment of the competence of the marks, they may offer to join the party, as full members, or as hirelings. They may bide their time until the moment comes to betray their comrades and escape with the treasure, or they may simply gather the other Fool Hammers and trail the party to their destination. There they wait for the fools to face the dangers and garner the loot and then, rob those that survive their adventure.


Ludovir the Gracious is tall, handsome, and strong. His is an open face with a ready smile, and no man goes thirsty in his company. Ludovir is hale and hearty, a man’s man, and also much admired by women. He is in all ways, just the sort of man whom an adventurer in a tight spot would want at his side. Right up until the very moment when Ludovir puts a crossbow bolt into his comrades back.
Never is there any hint in Ludovir’s frank and easy manner, but when the time comes that betrayal and murder are to his advantage, Ludovir the Gracious will kill with a smile
Ludovir leads the Fool Hammers due to his overwhelming charm and his ability to simulate those qualities which make for a good leader of men.
Ludovir wears chainmail +2, and carries a dagger and broad sword in addition to his crossbow and quiver of 24 bolts. Also, a potion of Heroism
Ludovir, and all the other Fool Hammers can be assumed to own, or be carrying all standard adventure equipment.
In adjusting his statistics for higher levels, the DM may grant him magical weapons of greater power, potions, or rings, to what ever degree is needed to make him an appropriate threat. 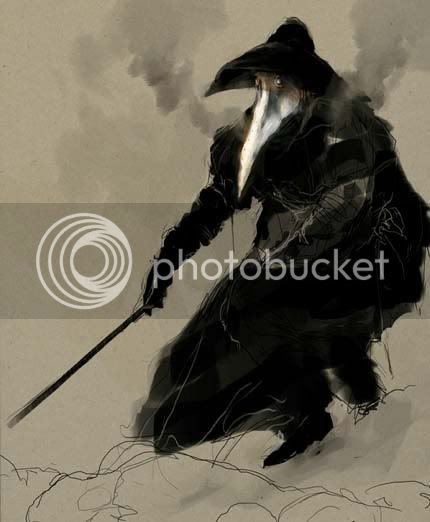 
During the recent Great War, as in all wars, many more peasants and other non-combatants died of disease and famine, than there were warriors slain for glory. Dahktur, an old oerdian word which once meant, "mender", and referred to the wandering tinkers who repaired damaged metal pots for farm wives, came to be attached to those pox healers who bravely strove to hold back the plagues without benefit of clerical magic.


Gambarodus was one such pox healer, and more successful than most in his use of ancient and arcane sciences in the curing of disease.


So good was he, at recovering those who stood at Death’s door, that he eventually drew the bleak gaze of Incabulous, god of disease and ill sendings. Incabulous determined to turn Gambarodus to his own service, and commenced to whisper in his ear all the long weary hours of his work. He spoke of the natural order of things, the beauty of disease, the sweet release of death. In time, Gambarodus was won over to the ways of Incabulous.
Or, it could be that he simply went mad. Perhaps the god never really spoke to him at all. Incabulous only knows.


Gambarodus now marauds with the Fool Hammers in order to gather the wealth he needs to raise a shrine to his new patron deity. He hopes that if the god is pleased, he may grant clerical powers to his convert.
Dahktur Gambarodus still wears his black, waxed greatcoat, his physicker’s broad hat, and his beaked plague mask at all times. The beak of the mask is stuffed with strong, aromatic herbs and flowers, and sweetly scented airs accompany the dahktur wherever he goes.
The good dahktur also carries a bronze censor which hangs from a chain. The censor is filled with burning incense and Gambarodus is capable of employing it as a ball and chain flail, doing 1-6 dmg on a hit. He also carries a rod of wounding, 1-8 dmg, wounds will not heal with out magical aid. 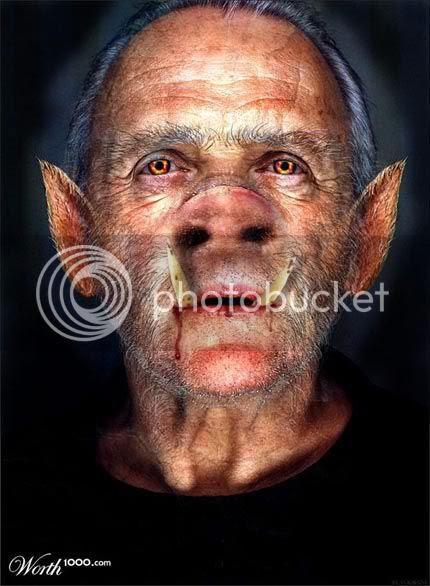 
Bloodpig is intelligent and very well spoken, in fact, a veritable fountain of information, and, also a compulsive cannibal. He yearns to impress others with the depth of his learning, but in combat, he must save vs poison at the first blow struck, or fall into a blood frenzy, complete with swinish squealing. Once his foes have fallen, he will be somewhat embarrassed by his behavior, and will engage in a scholarly monolog on various pet subjects whilst he prepares select cuts of the slain with favha beans, and a nice dry wine.


Bloodpig specializes in the mixing and compounding of potions and carries with him potions of Strength, Healing, Speed, and Heroism. He also supplies the other Fool Hammers with concoctions suitable to their temperaments


Bloodpig wears a rough woolen robe over his mail. He carries a medium shield, war axe, and two daggers in addition to a short bow and a quiver of twelve arrows. 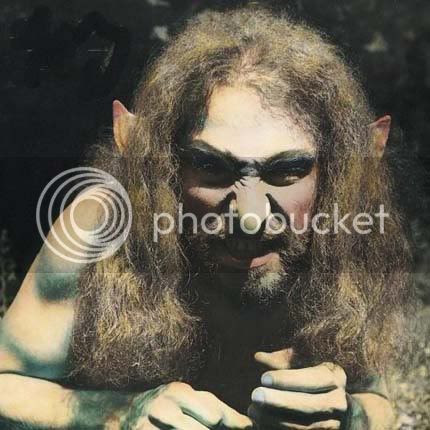 
Sljumker is most likely a grugach elf, or at least, mostly a grugach. His parentage is uncertain, and none dare ask him. He is foul, coarse, and of a disposition most vile. Indescribably crass, Sljumker may even fling his own feces at foes if given the chance, and he "goes bar-arss" when he may.


He is a thief of consummate ability, however, and skilled in woods lore, as well as a creature without moral boundaries. This makes him most useful to the others of the Fool Hammers.


Sljumker is near feral, and prefers to forage for his food. He gleefully devours birds, rodents, insects, and whatever else he can catch. He is an expert at setting traps and snares.
One of his favorite tricks is to hurl a badger he has cruelly mistreated into the midst of a sleeping party’s encampment.


When naked, Sljumker smears himself with a musky black grease which Bloodpig provides for him. The grease acts as, "oil of slipperiness " and also confers a +2 ac bonus.
Sljumker carries a sling and thirty bullets, a short sword, and three daggers. 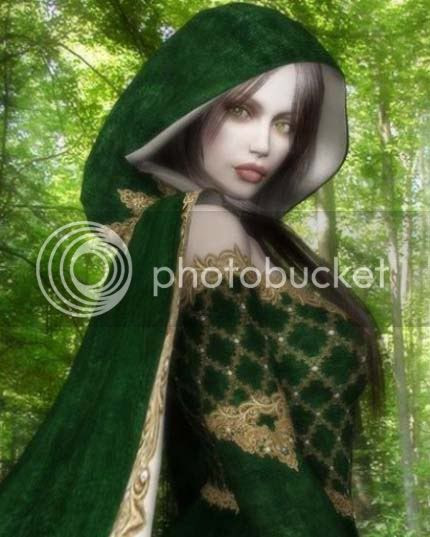 
Eilisceenia is totally self serving, a paragon of narcissism. This nature, combined with her stunning beauty and ability to divine the motives of others, and willingness to tell them exactly that which they most wish to hear, nearly always results in her coming out ahead in any non-combat exchange.


Eilisceenia is without scruples, but she has a keen sense of self-preservation. Though she will sacrifice others for her own personal gain without compunction, she will not put them in a situation where they might turn on her to save themselves.


She is usually accompanied by one or two charmed, or simply besotted bravos who serve as both her body guards and entourage.


Eilisceenia carries a dagger, and four darts hidden beneath her cloak. She will also have a philter of love, and a ring of protection +2.


The DM may choose spells appropriate for what ever level Eilisceenia is being portrayed at. She will favor magic which allows her to control or influence others, and to protect herself.


Credit where credit is due.

The illustration I used for Ludovir is by Jeff Jones, a sketch from Reality magazine.

The Plague doctor is used by gracious permission of Evan Shipard. His art blog is Ev's Place.
http://evsplace.blogspot.com/

Sljumker is represented by the elf album cover, creepy little bastard isn't he?

Eilisceenia, I'm afraid I don't remember where I found, there's all kinds of crap on my drive.
Posted by E.G.Palmer at 6:09 PM

I *love* having parties of adventuring NPCs that cause the players all sorts of fits. There's one in my Dark Ages game right now. :)

Glad you like them! I'll probably go back and edit this a few times to flesh them out a bit more. Maybe add some henchmen.
I think I'll put up other NPCs that PCs must interact with in non-conflict situations. Non-Player charactor actors, as it were.

I love that you used the Elf album cover for Sljumker, if only because Dio has always represented the perfect fusion of genre fantasy nerdery and heavy metal. \m/

Thanks, James. You know, I think I'll do some album cover mining for more ideas.