Alright kids, sit still, keep your hands to yourselves, and I'll read you a story. 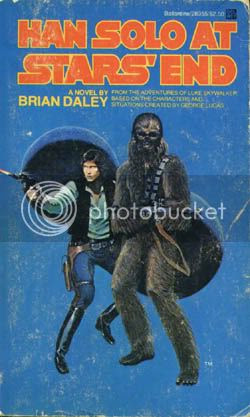 Or at least, part of a story.
The three Han Solo books that Brian Daley wrote are my favorite Star Wars fiction. I think this is because they are the closest to the pulp science fiction adventures and serials of the golden age than most of the stuff written later. Lucas, I have heard, made Star Wars because he couldn't get the rights to Buck Rodgers, or was it Flash Gordon?
Anyway, Brian Daley captures the feel of two-fisted science fiction adventure, and the characterization of Han and Chewie from the original movie much more closely than alot of the later writers. It's not that I've actually read that many Star Wars universe novels, at least, I haven't finished them. They just often don't hold my attention. It seems that though they use familiar characters and props, I just can't buy the way they have them speak and act.

This is a short excerpt from the first few pages of Han Solo at Stars' End. The first of the Daley series. Han and Chewie are in the jungle on a planet called Duroon having just finished a weapons smuggling run to a group of doomed rebels. The rebels are attempting to revolt against the Corporate Sector Authority, a titanic company chartered by the Empire to exploit the natural resources of this particular arm of the galaxy.
Now, Han and Chewie know there is a Corporate Sector Security Police ship in orbit just waiting for them to try and leave the planet so it can nail them.
************************************************
They could wait no longer. The first lightening of the sky would bring every flitter, skimmer, and armed gig the local Authority officials could lay hands on, in a tight visual search grid. Chewbacca, sensing Han's mood, made a snarling comment in his own language.
Han lowered his macrobinoculars. "Correct. Let's raise ship."

They adjourned below, buckled in, and ran through a preflight-warming up engines, guns, shields. Han declared, "I'm betting that lighter will be holding low, where his sensors will do him the most good. If we come up any distance away from him, we can outrun him and dive for hyperspace."
Chewbacca yelped. Han poked him in the ribs. "What's eating you? We just have to play this hand out." He realized he was talking to hear himself. He shut up. The Millennium Falcon lifted, hovering for just a moment as her landing gear retracted. Then Han tenderly guided her up through the opening in the jungle's leafy ceiling.

"Sorry," he apologized to his ship, knowing what abuse she was about to take. He fired her up, stood her on her tail, and opened main thrusters wide. The starship screeched away into the sky, leaving the river steaming and the jungle smoldering. Duroon fell away quickly, and Han began to think they had the problem licked.

Then the tractor beam hit.

The freighter shook as the powerful, pulling beam fixed on her. High above, the Authority captain had played it smart, knowing he was looking for a faster, more maneuverable foe. Having outwitted the smuggler, he now brought his ship plummeting down the planet's gravity well, picking up enough speed to compensate for any dodge the Falcon might try in her steep climb. The tractor pulled the two ships inexorably into alignment.

"Shields-forward, all. Angle 'em, and get set to fire!" Han and Chewbacca were throwing switches, fighting their controls, struggling desperately to free their ship. In moments it became clear their actions were futile.

"Ready to shift all deflectors astern," Han ordered, bringing his helm over. "It'll have to be a staring match, Chewie."

The Wookiee's defiant roars shook the cockpit as his partner swung the freighter onto a new course, straight at the enemy vessel. All the Falcon's defensive power was channeled to redouble her forward shields. The Authority ship was coming at them at a frightening rate; the distance between ships evaporated in seconds. The Authority lighter, making hits at extreme range, jounced the two around their cockpit but did no major damage.

"Hold fire, hold fire," Han chanted under his breath. "We'll train all batteries aft and kick him going away." The controls vibrated and fought in their hands as the Falcon's engines gave every erg of effort. Deflector shields struggled under a salvo of long-range blaster-cannon fire, lances of yellow-green annihilation. The Falcon ascended on a column of blue energy as if she lusted for a fiery double death in collision with her antagonist. Rather than fight the tractor beam, she threw herself toward its source. The Authority ship came into visual range and, a moment later, filled the Falcon's canopy.

At the last instant, the warship's captain's nerve gave. The tractor faded as the lighter began a desperate evasion maneuver. With reflexes that were more like precognition, Han threw everything he had into an equally frantic bank. The two ship's shields couldn't have left more than a meter or two between them in that blindingly fast near miss.

The lighter plunged downward, unable to halt her steep dive quickly. The freighter bolted out of Duroon's atmospheric envelope, out into the void where she belonged. Far below her, the Authority vessel was just beginning to pull out of her dive, all chance of pursuit lost.

Han fed jump data into the navicomputer as Chewbacca ran damage checks. Nothing irreparable, the Wookiee decided, but everything would have to have a thorough going-over. But Han Solo and Chewbacca the Wookiee had their money, their freedom, and, for a wonder, their lives. And that, Han thought, should be enough for anyone, shouldn't it?

Now that, is what Star Wars is supposed to feel like! I wish Lucas had had Daley write the last three movies. That passage is also exactly what I would want in a Star Wars game. That last paragraph is one of my favorite bits of word smithing. I can just see this whole sequence playing out in my mind. 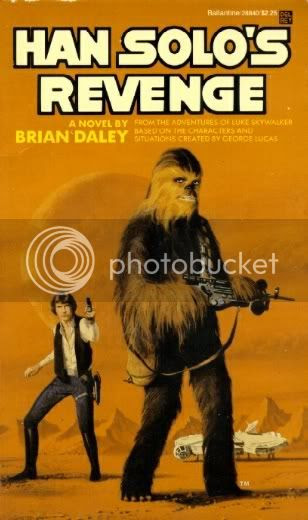 Here's the other two in that series, I recommend you dig them up if you haven't read them before. If you like the groove of pulp adventure science fantasy, you'll grok em, daddy-O. And if the last three movies are all you know of Star Wars, you need to read them, to know what's been lost. 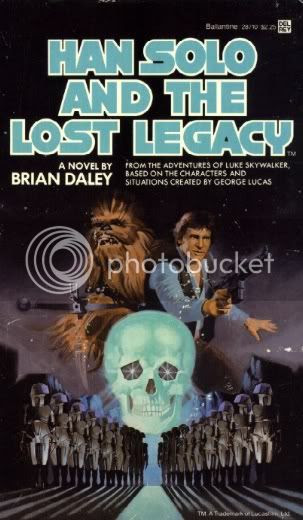 Brian Daley also did the adaptations of the original trilogy for NPR's radio productions, which I daresay are better than the movies.

I loved these books! I read them in the dark years after Return of The Jedi when there was nothing Star Wars going on. They gave me a good feel for who Han was and made him my favorite character in the series.

I did like the new novels up to the New Jedi Order business that introduced the Yuzong what-thongs. Because they still kept the Republic era a mystery. They are worth finding as well as the newer Solo Trilogy that takes place before these. BTW the newer series mentions the older trilogy of novels a few times.

In my opinion, these three are probably the best Star Wars novels written—from a standpoint of originality and capturing the spirit of both the characters AND the universe. For me (as a huge Star Wars fan and Star Wars RPG game-master, these books kind of set the tone for the 'expanded universe' as being a cool place. Unfortunately, I don't think a lot of the REST of the EU has lived up to the promise of these novels.

Oh, and who could forget the Dinko, and its predatory reaction to Ploovoo Two-For-One's nose? Not me. ;)

I laughed and laughed the first time I read the bit with the Dinko trying to eat Ploovoo nose first! Maybe I should stat the dinko up? That would be an awesome beast to use as a trove guardian.

wow, talk about a blast from the past. I recall reading the first one and the third one when I was a teen. I don't normally care much for movie franchise fiction (even way back then) but these were fun reads.

I love these books! I have read the HELL out of my copies.... Star's End is the best of the three, But Revenge has the awesome scene at the start where Han makes a connection to pick up some cargo, and realizes he's working for slavers... one of the best written Star Wars scenes ever! And Lost Legacy has the double bonus of not only explaining how Han got the Corellian Blood Stripe, but his awesome final showdown with uber-villain Gallandro. Epic!

Those first two covers, with the simple colors and heroes posing, harken back to 1950's stuff. I like that, although I don't think I'd ever read a Star Wars book - unless it was based on KOTOR.

You'd like these Brunomac, very pulpy. You could take the star wars off of it and put it in the 1930s or 40s and the characters and plots would still fly just fine.