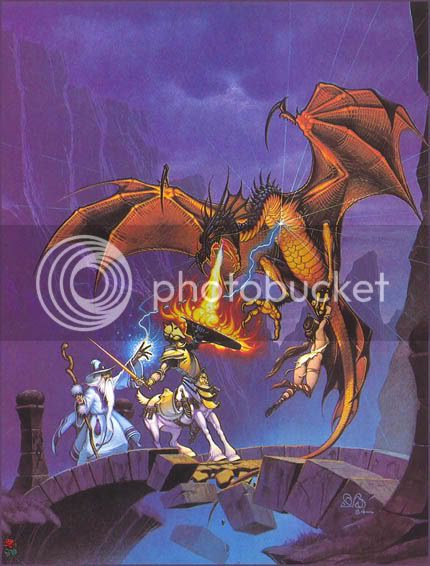 I'm a big fan of Gygaxian Naturalism, the idea that the ecology of the game world should, in general, function like that of the real world. Creatures reproduce normally, and fill niches in the ecologic system in a way that makes sense. Or, at least, game sense.

That being understood, I also really like Monsters. A monster being something that doesn't necessarily make ecologic sense. Something that's truly horrifying and unnatural.

I don't see this as being contradictory, at least where The Game is concerned. If, normally, the game world is seen as much like our own in the way that nature functions, the players become more at ease in it. It's easier to slide into that suspension of disbelief if what you're asking them to believe is not too far removed from that National Geographic special they just watched.

That makes the Unnatural all the more powerful and unnerving, when they hear it gurgling and panting out there in the tarry blackness just beyond the torch light.

I think dragons should be just this sort of uncertain creatures. They've had so much attention from game designers, and fantasy enthusiasts of all stripes, that they've become a bit too standardized for my taste.
It has been only very recently that fantasy literature and media has made the dragon a creature which is always reptilian, four legged, fire-breathing, and winged. The dragons of medieval and ancient legend varied widely in form and type.
So, instead of different breeds of dragon, red, blue, copper, etc... I like to make every dragon a unique monster, widely variable in type. I assume all can interbreed with each other, but all offspring are singular. My dragons do not breed true to type.
This is a stripped down version of my dragon generator just for the D6, it's quick, easy, and the players won't know what hit them.

Special Defenses, 2 in 6 chance of possessing.
1. Only hit by magic weapons.
2. Anti-magic field, 5' radius
3. Chameleon, treat as elven cloak
4. Miasmal fog, Anyone closing to melee range must save or contract random disease.
5. Regenerates as does a Troll.
6. Blinks as does a Blink Dog.

Special Attack, 2 in 6 chance of possessing.
1. Claws of Sharpness.
2. Tail spines as Manticore
3. Frog tongue, attacks as would a Cave Fisher
4. Hypnotic gaze. Those who meet the dragons eyes must save or be "Charmed" as per spell.
5. Cause Madness. Target must save or be stricken with random mental illness *
6. Prehensile tail. Dragon can grasp, hold, or constrict for 1-6 damage per round.

Unique Breath Weapon
1. Spittle ball causes random polymorph to those hit.
2. Roar/cone of sound, does 1-8 dmg per hit die, and causes permanent deafness to those failing save.
3. Breath becomes "Web" as per the spell.
4. Glob of protoplasm which transforms into random monster under the dragon's control.
5. Breath disintegrates metal. Only magic items may attempt to save.
6. Hurricane force wind. Failure to save results in target being dashed against closest obstruction. Calculate as falling damage. 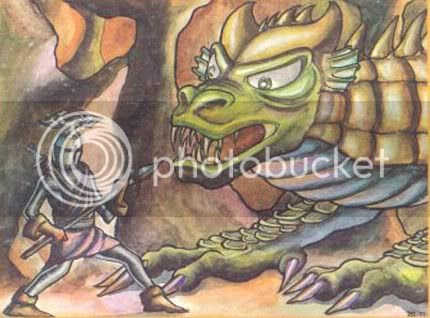 You had me at the greatest DRAGON maagzine cover of all time. 8)

That's pretty nifty. I have an intense love/hate relationship with the ordered, draconic family from D&D. But I increasingly prefer to have each dragon as a unique thing--a monster in the original sense of the word, rather than as a scary species.

I will defintiely keep this chart in mind.