"Did the moneylender seem a bit odd to you?" 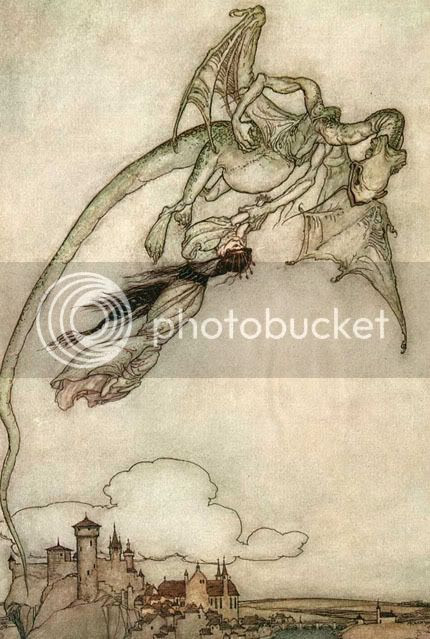 A piece clipped from an illustration for Grimm's fairy tales by Arthur Rackham. With Edmund Dulac, he's one of my very favorite of the golden age illustrators.

Right now, I'm using direct links from a photobucket account to put up these images here on Old Guard. I'm resizing them down to the max size so that they fit in the column, but I know I should be able to make them clickable so that you guys can see them full size. I'm a bit e-challenged though, and I'm not sure how to do this. Let me know how that works, and you'll love the big scans.

So, here's the monster that came to mind when I saw this illo.

Wyrmson.
Frequency: very rare
No. appearing: 1
Armor class: 2
Move: 6"/24"
Hit dice: 7
% in lair: 75%
Treasure type: variable
No. of attacks: 3
Damage/attack: 1-6/1-6/2-12
Special attacks: Breath weapon, possible magic use
Special defenses: nil
Magic resistance: nil
Intelligence: exceptional
Alignment: Lawful Evil
Size: M/L (12' long in wyrm form)
A Wyrmson is the spawn of a male dragon in human form and a normal human woman. Dragons occasionally take man shape to move undetected in cities, or to "entertain" a captive. A wyrmson is not a were-dragon. It will appear to be an average human being until at least the age of 70. Only then is it possible that a triggering event will cause the transformation that reveals it's draconic parentage.
In either shape, avarice is the defining characteristic of a wyrmson, the creature is consumed by lust for personal gain in any form.
In it's human life, a wyrmson will be drawn to work involving money and power. A wyrmson may become a moneylender or changer, a banker, a merchant in expensive goods, or, it may work it's way into some appointed position of power that will allow it to accumulate wealth at the expense of others. A tax collector or harbor master perhaps.
A wyrmson will live a normal life, unexceptional except for the power of it's greed, until it has reached an age equal to young maturity, for a dragon. At that point, there is a 20% chance per exposure to a significant, "treasure", that the wyrmson will transform into it's permanent semi-dragon form.
"Treasure", in this instance, is defined as anything which others set great store by, or greatly value. This can be, of course, the standard gold or gems, but it may also be art, magic items, or a beautiful woman. The wyrmson's desire for treasure is driven not by the real value of a thing, but by the need to deny the ownership of others.
In it's changed form, a wyrmson is a grotesque, dragon-like humanoid combining the worst features of dragon and man. Pot-bellied and long limbed, a wyrmson still has strength as great as that of an ogre, and iron talons capable of rending mail.
A wyrmson's breath weapon is a bloodcurdling roar that does 6-12 points of damage to those directly in front of it, (a cone shaped area 5' x 30') and causes fear and confusion to everyone within 12' who fails to save vs breath weapon. The wyrmson may only use this ability once per day.
A wyrmson may use magic if, in it's human life, it was capable of doing so.
A fully changed wyrmson will seize whatever, "treasure" triggered it's transformation and fly off to establish it's new hoard. Thereafter, it will begin to systematically raid the surrounding area, compulsively stealing anything of value to add to it's hidden treasure vault.
* note for the game master: The wyrmson is meant to be a surprise monster. The player characters should be interacting with it in it's human form for some time before it's transformation. It could be that the wyrmson is a tax collector who plagues them when they return from the dungeon, laden with gold. Or it may be that the wrymson is a moneychanger whom they deal with to hold and secure the treasure they win in their adventuring. In any case, the eventual transformation will be an event which costs them dearly and provides a hook for further adventure.
Game on!
Posted by E.G.Palmer at 4:18 PM

Me mum being an artist, Wind in the Willows, illustrated by Arthur Rackham, was the first book she read to me. I've always loved Arthur's illustrations. They feel like they're part of me!

Why, thank you very much! Rackham is great, isn't he? As much as I love the, I-did-it-myself feel of much of the "old school" D&D art, I would love to see D&D products illustrated with Rackham or Dulac level art. Hmmmm, Arthur Rackham, 25th level illustrator, hp12, ac9,special attacks: fascinate with art, ink blinding.

I myself feel that the Rackham style fits very well into my own concept of adventuring in the many never-never lands that present themselves in FRPG.

I could include a few more artists of that category as well, such as Eric Pape http://www.bpib.com/illustrat/pape.htm

And there are others which mix and match. I love the "fairy tale" "Legendary" feel derived from
the sort of work Pape and Rackham did, and the detail of Allen K's illos.

I had never heard of Eric Pape before, he has connections to both N.C.Wyeth and Virgil Finlay according to that bio. Very interesting!

I'm going to point you guys to one of my daily visit blogs, http://goldenagecomicbookstories.blogspot.com/

Every day, Mr Door Tree puts up beautiful scans of art from pulp science fiction and fantasy magazines, classic comic books, golden age illustration work, portfolios of great illustrators, I can't recommend this sight highly enough. You could spend weeks going through the archive of art he has posted.

Such a beautiful site. Thanks for that, EG!