Run! Blordels' turned into a... What the Gax is that,anyway! 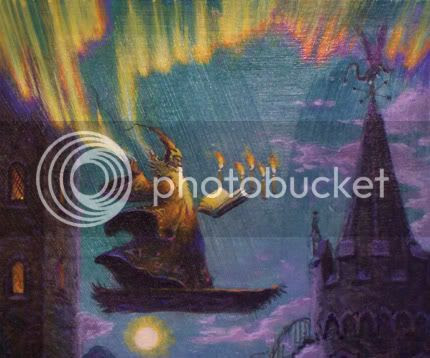 The inexplicable whimsies and enigmatic follies of the mighty Zagig are of course known to all who work or dabble in the Art. Only a very few, however, suspect the true depth of the arch mage’s inquiry into the hidden nature of the Oerth’s arcane aetherosphere and the ways in which it may be manipulated.

Before his disappearance, and unsupposed by most, Zagig had set into motion an unknown number of personal experiments, schemes, plots, and fancies fully capable of continuing to their respective ends without the direct supervision of the mad mage of Greyhawk.

Among them is a spell-like work of magic which even now propagates itself by its own volition hither and yon across the flanaess, though it is unrecognized for what it is. This self sufficient eldritch construction may have been meant to be a curse, or perhaps a jest, or else it may serve some other, as yet unseen greater purpose.

Whatever the reason for the Pananthropic Glamour, though it may bring glee to Zagig the Mad, wherever he may be, it is no humorous matter to those it visits itself upon.

A person or character who contracts, (or is cursed, or blessed), by the Pananthropic Glamour undergoes transformations into random forms either at certain times or which are triggered by certain circumstances. A person so afflicted is known as a Yragernerian Panathrope by the handful of wizards and sages who recognize the handiwork of Zagig the Inexplicable.

Though superficially the Glamour seems akin to lycanthropy or other such were-beast transformations, its effects are far more reaching and unpredictable.

The form which the victim takes is determined randomly at each transformation by rolling upon the random monster encounter table most applicable to the immediate environs. The person so “blessed by Zagig” completely becomes the creature chosen by chance, and will act in a manner appropriate to the monster he has become.

The victim may be overcome by the magic and transform at certain times, monthly, seasonally, annually, or other. Alternatively, the magic may be triggered by a given event. Such an event may be hearing the scream of a horse, a dog crossing the victim’s path, in the presence of wooden shoes, if the victim drinks beer, eats a muffin, takes a bath, takes off his hat, looks directly at the moon, stubs his toe, etc..

The triggering event need have no reasonable connection to the transformation. Somewhat like a taboo, or a geas, it is a forbidden occurrence which will invoke the power of the glamour and bring about a transformation. The triggering event should be chosen by the Dungeon Master and should have a reasonable chance of occurring at least once per game, if the Panathropic Glamour is contracted by a player character.

The duration of the transformation is also variable and follows no clear logic. The monster form may persist until sundown, sunup, lunch time, the next rain, the next holiday, until a joke is told, until the monster is struck by a pillow, the setting of the moon, until invited to tea, etc… This may be determined randomly from a prepared list of random events, or by DM fiat.

What exactly draws the glamour to an individual is unclear, though it appears to have at least a component of karmic justice, or possibly comeuppance for those who jeer at fate.

Also, persons who commit alignment violations in the presence of a carrier of the Glamour must save vs. spell or contract the magic themselves.

Due to the changing and chaotic nature of the Glamour, it may also be passed to others in various ways which depend upon the changes in each manifestation of the magic. Each victim of the glamour may pass the spell curse in a different manner. Such as by biting, slapping, kissing, spitting, making love, sneezing, laughing at, farting, sharing wine, etc. There need be no logical connection between the action which imparts the glamour and the nature of the glamour itself.

Such is the will of Zagig. He is the Egg-man, He is the Walrus! Koo-koo-katchoo!
Posted by E.G.Palmer at 8:17 PM

NM, that was weird, only part of the title, and none of the post loaded the first time I checked this. All it said was "Run"

Blogspot had some sort of stroke as I was posting. It took off and posted on its own after I put in the pic, but before I added the text.

Another mystery ofthe internet, I suppose.

Perhaps just another strange manifestation of the Panathrope!