A monster, and a magic item for the Weird West.

Monsters are very rare in the Weird West, it just happens that PCs run into them more often than most folks. People keep to their towns and settlements for the most part; it’s the brave, the desperate, and the touched who dare the open range, the mountains and the deserts by their lonesome.

Likewise, items of a supernatural nature are exceeding rare. Powerful objects of the Art are always singular in nature. Minor arcane items are also very rare, but may possibly be replicated. PCs aren’t likely to be able to do this however. 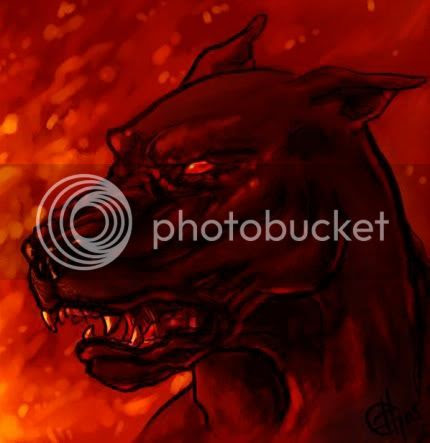 Legends say the Gundog haunts old battlefields or the sites of massacres. A great, black hound with iron teeth and burning ember eyes, the beast is wreathed in acrid gun smoke and leaves behind it paw prints which char the earth.

When the creature appears, its size and power seem to change to match the scale of the carnage which took place at the site. Where only a few were killed, the gundog has appeared but little larger than a wolf. At places where great battles have occurred, and many died by the gun, tales have it the beast grows to nearly the size of a horse.

It is unclear whether the Gundog is a single, immortal monster, or a type of creature of which there may be many. Conflicting tales are told of the Gundog. It is also unknown if it, or they, are supernatural in origin, or some sort of aberration.

Though in all tales the Gundog is a malevolent killer, it seems to choose its adversaries by the strength of the threat they may pose. A Gundog the size of a pony is said to have appeared with a roar like cannon fire the night after the battle of Shealho. It killed most of a cavalry patrol before vanishing, but completely ignored a group of refugees passing by.
The Gundog which appeared on the Dead man’s leg of the Chislem Trail paid no heed to a dozen cow punchers and instead went straight for Lightening Caleb Booker the infamous gunman. Lightening emptied both sixguns into the dog before it reached him and it disappeared in a cloud of brimstone. Or so they say.

In addition to the bite of its terrible jaws, the Gundog may employ its Muzzle Blast up to six times per combat. This is a sudden roaring bark which also discharges red hot shot as though a shotgun had fired from within the dog’s throat. The muzzle blast bark has the same range and effect as an actual shot gun. In larger accounts of the Gundog this weapon is equal in range and effect to grape shot fired from a cannon. 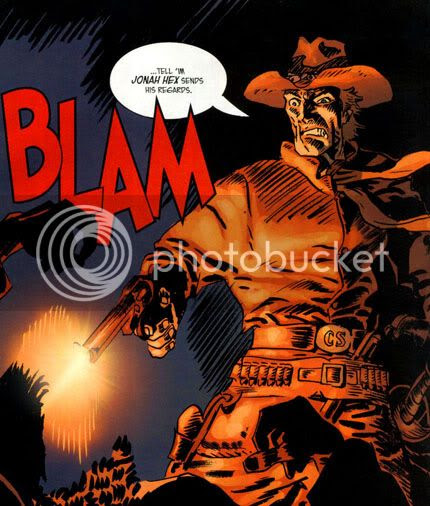 Somewhere, out there, maybe in a ramshackle ghost town or a ruined ranch house, is a battered cartridge box containing the Demon Bone Bullets of Father Callaghan.
The story goes, the Father, an easterner and city-slicker were’t all that strong in the faith himself, till circumstances found him sharing a stage coach with the fearsome Ezra Crumb.
Crumb, called by them who know as, “Ezra the Ghoul Scalper”, regaled the Father with many hair-raising tales of his encounters with the unnatural. Callaghan, more a man of science than a child of God, believed none of it. Though Ezra’s air of firm assurance and vivid powers of description caused him some unease as the night ride went on.

Ezra, as it turns out, were’t just traveling that night. He was a-hunting a diabolic thing called the Buckthorn Fiend. The wind had told Turning Cloud the Shaman that the fiend would come to the coach with the dark of the moon, and Ezra Crumb meant to see it got its trip back to hell.

When, round about midnight, the horses screamed and a yard of spiny black demon arm, plated in armor like a scorpion, came a-groping through the window, Father Callaghan found his faith real quick.

Though the coach was torn to flinders, the horses and both the driver and side man killed horribly, Crumb and Father Callaghan survived that desperate fight beneath the cold prairie stars. The Buckthorn Fiend was banished to the pit, its skull transfixed by the sainted iron of Crumb’s Arkansas toothpick, and from its bones the good Father fashioned 24 bullets of .52 caliber for the Sharps rifle.

Callaghan died in agony some few months later, poisoned by inhaling the demon bone dust kicked up by crafting the cartridges. Ezra Crumb is known to have expended some of the rounds in subsequent adventuring, but how many is unknown.

Each of the Demon Bone Bullets acts as a weapon of slaying. A successful hit with one is always a killshot. In addition, the bullets can hit creatures which otherwise are unharmed by mortal weaponry.
There is a 1 in 20 chance of a misfire each time one of these infernal cartridges is fired. Anyone who may find the old ammo box containing the bullets is advised to employ them with care. It is unlikely the demon bone is any less lethal than it was and a misfire could possibly throw deadly powder into the face of the rifleman.

I've had very little time or creative mojo lately. There's a lot of stuff competing for my energy this spring. I've got images and feelings roiling around in my mind, game wise, but not enough time to spend on pulling them together. It'll come around eventually.

Here at O.G.G.A., we post no monster before its time.

Also, I think I'm going to get myself one of those reproduction Colt model 1860 army revolvers.
Posted by E.G.Palmer at 5:56 PM

Awesome! I even dig the alignment--"enigmatic evil," indeed.