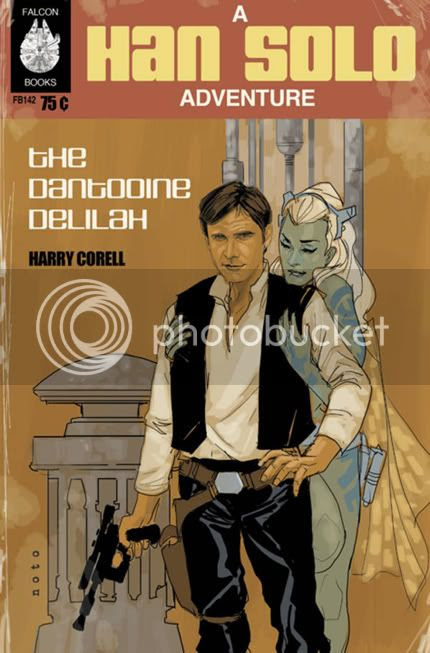 Above is a cover for an imaginary Han Solo novel that I ran into on Boing Boing,of all places. Its just art, not a real novel. Sorry to get your hopes up.
Its by Phil Noto, whose work I like, though he does tend to give women overly narrow hips.
Anyway, The image sparked my memory and I went rooting through the old game idea folders to retreive the bones of a Star Wars campaign that never quite jelled.
We, the game gang, had West End Games Star Wars RPG, and the idea was to have an campaign with a large number of characters whose lives mostly overlapped, but didn't always. This was probably 88, just after the WEG Star Wars came out.

I was going to trade off game mastering with one of the guys so that we could both play in the same campaign. We'd alternate games or go two for two or something along those lines as we both wanted to play, but somebody had to GM. The other players could with either of us GMing as we'd have multiple game directions running concurrently.

The game was to be sort of Star Wars meets A-Team plus "Caper" movie, with some Western themes thrown in. The party was to be a crew of rejects, rat bastards, whak-Os, and failed criminals, rebellion friendly but not active members of it.

Thrown together by fate, or maybe the Force, they find the battered hull of an old Republic era Intruder class torpedo boat and decide to make a career out of sucker punching the Empire.
The first few games would have centered on scrounging, stealing, trading for, or otherwise aquiring the parts and equipment to make the old boat functional. Then it would have been on to smuggling, piracy, bushwacking and otherwise sticking their thumbs in the eye of the Empire whenever possible. 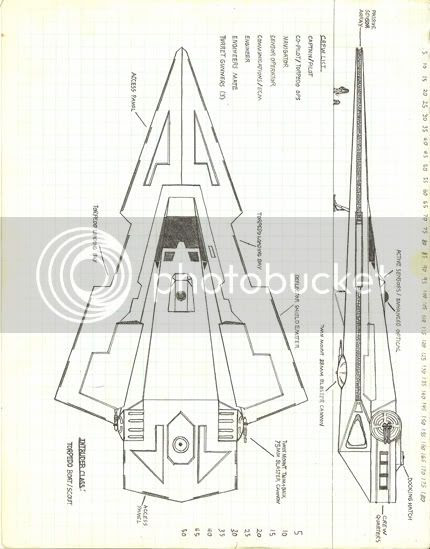 Above and below are a couple of the sketches we worked up concerning the general design of the Intruder torpedo boat class.

The bottom drawing has a scout walker standing near the bow for scale. Also a speeder bike, a guy, and an R2 unit. 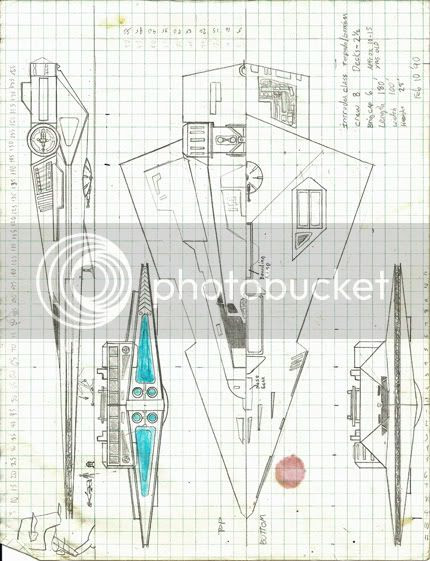 My character was an Imperial deserter, a renegade storm trooper named Izayah yaegr. (This was before storm troopers were clones, of course.)

In my character background I wrote, "A member of the Nova Demons swoop gang in his youth, Izayah joined the Empire after his wing of the demons was destroyed. His career as a storm trooper ended when he deserted after causing the death of an officer in a bizarre practical joke. Since he's been a smuggler, a gunman, and a real thorn in the ass of authority. Izayah will do just about anything to stick it too the Empire."

Izayah had one, intermittant and unreliable Force power, an inhumanly fast speed draw. Once per day he could roll to attempt it. It didn't guarantee a hit, but it did, if successful, give him the first shot regardless of the circumstances.

This game never did happen. I think mostly because we had a hard time trying to figure out how to apply WEG's rules to our AD&D gaming sensibilities. The WEG rules make some story driven assumptions about the game that were a bad fit for us.
We didn't realize that at the time, it just felt off somehow.

We started on an house rule adaptation, but it took too long, and enthusiasm flagged.

Is there a limbo, do you think, for campaigns that never happened?

By The Sword said...

I really enjoyed the WEG Star Wars game with its character archetypes. I only got to play it in short surts but it was certainly more fast-and-loose than the D20 Star Wars.

I love the ship by the way.