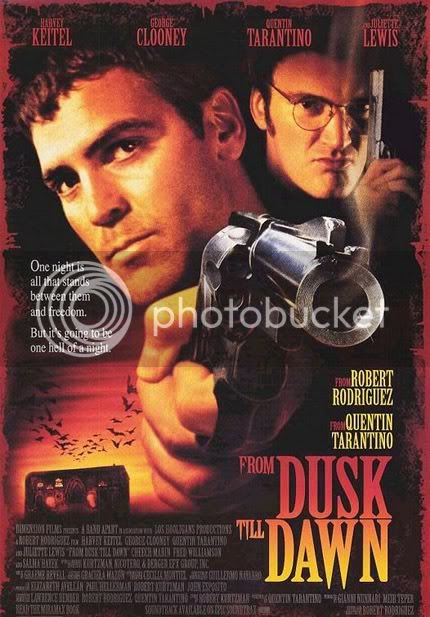 A couple of days ago, Trollsmyth put up an interesting post concerning rules design.

Let me quote from the post here where he quotes JB 's post from B/X Blackrazor.
"Good game design rewards behavior meeting the objectives of play. "

"By which he means, an effective game rewards the sort of play that the game is intended to create. To whit, if you make the Tarantino Cinematic RPG, it should involve lots of people sitting around and communicating who they are as people by using pop culture references when discussing matters of morality and psychology, or invoking the creative process, punctuated by periods of horrendous and blood-spattering violence. "

This, of Course, sounds wonderful to me. I'd love a Tarentino themed game. The first time I saw Reservoir Dogs, I thought, "Hey, these characters talk like the guys and I do in real life". It's just that Tarentino characters get to shoot people while philosophizing instead of just drinking coffee.

Trollsmyth suggests an interesting mechanic to facilitate the Tarentino game experience, which I also like.

"So in our Tarantino game, maybe every character starts with an artistic obsession and a secret existential crisis that is referenced by those obsessions and a pile of poker chips. Getting another character (that is, the player, in this case) to agree with your argument as to the worthiness of your obsession earns you a poker chip, and two if you can turn their argument towards promoting the worth of one of your obsessions. However, if they guess your existential crisis, you have to surrender most of your chips to them, and those chips are the only things that will keep you alive in the extremely brutal combat that is always threatening to erupt."

This is a good thought, and applicable to a story oriented game. However, I avoid anything that feels like a "story reward" type mechanic. That way lies narrativism and story games, Ewwwww.
My preference is for creating a series of potential events in a game scenario that may or may not occur and may or may not influence each other. I don't plot out any over arching story line that leads to a climactic confrontation. Sure It'll probably happen, but the player characters determine by their actions just how the game will play out, not me.
Tarentino's movies feel like Old School gaming to me anyway. There's lots of competing characters, each with their own motivations, all crashing into each other and spinning off crazy situations that nobody could have planned. That's D&D to me. 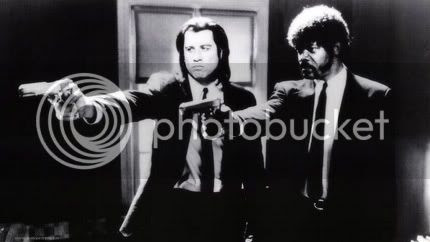 So, how to bring the Cinematic Tarentino theme to the Old School game I like? This is what I'm thinking.

Every player picks a theme song for their character at the character generation phase of start up. Tarentino movies are chock full of atmospheric music that accompanies those brutal gun battles and combats along with the philosophical bone gnawing, without it his movies would lose alot of their impact, I think. Consider the use of Stealers Wheel in Reservior Dogs, you're not going to forget that bit with the straight razor and the gasoline any time soon.

Every player then rolls a 1d4 to determine the number of times per game that they can play their theme song. You'd have to have a stereo, or maybe and mp3 or other sound file player, with the chosen theme songs keyed up on it. A nice sounding system would be necessary, tiny tinny speakers would make the whole thing seem silly instead of funky grim and groovy.

PCs would have to have initiative, or surprise in order to declare a theme song action. So long as the song plays, that particular PC receives bonuses to his actions. Pluses to hit, increases in skill level, etc. Once the song comes to an end, the bonuses vanish. The power of the theme song bonus could increase with level, should any PC survive the game. I would sort of expect a Tarentino theme game to end in a TPK most of the time, that's part of the idiom.

The length of the song would be a real time limit on the duration of the theme song bonus. Most songs only last 3 or 4 minutes of real time, and that's not a lot in an RPG combat situation. Also, since the PC can only use the theme song a limited number of times per game, they aren't likely to waste it on frivolous events. 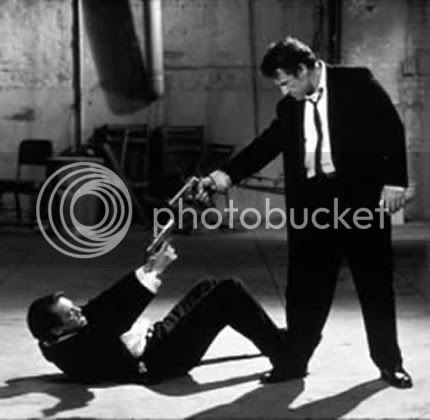 If more than one Player wants to employ the theme song bonus at the same time, I think I'd make them dice for it. Or maybe create some sort of character coolness index chart which would determine which character has more Tarentino in his veins. Yah, dig it, Daddy-O?

You could bolt this on to just about any RPG and make it work without too much trouble, I think.
Getting the music system set up satisfactorily and keeping the players from squabbling over songs would be the tougher part.
I think this would be a good way to inject some of that Pulp Fiction spirit into any game without having to work out a complete rule set just for it. 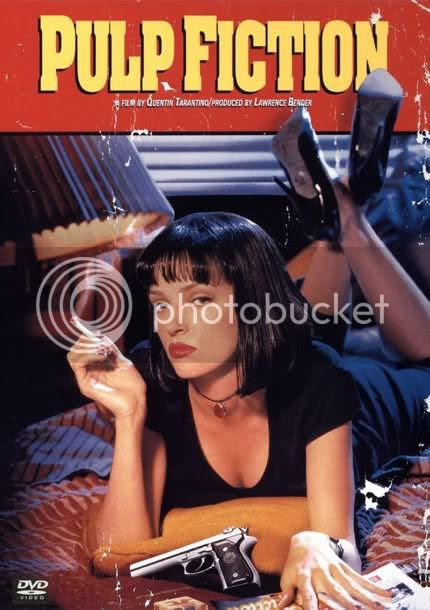 I was really thinking of this as applicable to modern gritty pulp and crime type gaming at first, but I think you could Tarentino just about any genre.
Basil Polidourus's Conan soundtrack has lots of great stuff for Sword & Sorcery type D&D gaming. I guess you could use just about anything that fit with the theme of your game
I'd use Johnny Cash for an Aces & Eights or other western character theme. "God'll cut you down", would be great tune for that. Or some of those spaghetti western themes like "the Ecstasy of Gold".
I think I'd like a little Monster Magnet for a Weird Planet type game.
In any case, this would be a way of incorporating the background music a lot of people like to play during games as an actual part of the game. I haven't tried this myself yet, but I'm sure the guys would be willing to give it a spin.

Wouldn't the wizard always get the best deal, since the prog rock songs go on the longest?

Heh... Very cool. And what's great is you could use all kinds of cross-genre pollination that's popular right now. Like Parlay from the third Pirates of the Caribbean flick, with it's strong spaghetti western overtones.