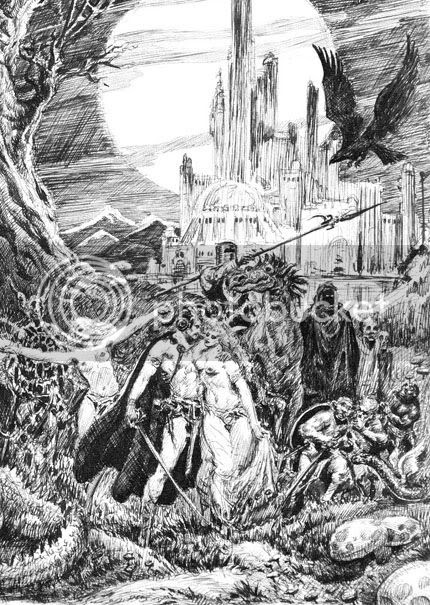 I had a short, but thought provoking exchange with Zak S of Playing D&D with Porn Stars a few days ago in the comments of one of his recent posts. It started me considering just what it was I was doing when I think about a potential new class for The Game.
Everyone has basic assumptions about The Game that they absorbed when they first started to play. Depending on which edition you were first exposed to, you internalize views about D&D, how it’s played, what it’s about, how the rules are to be applied, etc… This really applies to everything, music, cars, whatever, first impressions set the standard and are difficult to overcome.

My first edition was the Holmes basic box, and then on to AD&D, where I’ve been happy to stay ever since, occasionally venturing out to plunder other systems and drag their choice bits back to my lair to see if they may be assimilated.

Anyway, I think that when you are designing a character class for The Game, the degree of definition of the class will depend on what your vision of the game world entails, as much as which edition of the rules you are playing by, and what view you have about how those rules are to be applied. In my mind the notion of classes of people in the game world reflects the archetypes of the sorts of figures and characters in the fiction and literature that the game world is made of.
I think there is a sliding scale here that describes the degree of resolution you’re comfortable with in your version of The Game. The scale moves from very broad character types in OD&D, (a fighter class character can be anything from a pikeman to a cavalier to a gladiator to a goat herder with a rock), to the extremely and tightly defined classes of the newest edition, which run like Swiss watches, but are rigid and inflexible.

In the medieval world, society was seen as divided into three parts. Those who pray, those who fight, and those who work. These are broad, archetypal classes, similar to OD&D classes. You could add to this, those who use magic, and those who steal, and delete the workers and you’d have the standard line up of Cleric, Fighter, Magic-user, and Thief. Subclasses and refinements of these basic classes cover just about all the types of characters that make sense, to me, in the game. From this point, further character types, and increased definition of the abilities of those characters are more a matter of increasing the flavor and depth of the game world than they are of increasing player choice. Of course I’m not against that; I do it all the time. I see it as a matter of detailing and embellishing the game though, rather than fixing something that is, “broken.”

I think for a class to be fitting in the game, it should in fact simulate a group of people who appear in significant numbers in the game world. To actually rate a character class, there should be an actual occupational or social class of people to support the archetype. That’s where I’m coming from when I consider character classes; I’m trying to simulate in game terms a given archetype from what ever media, generally fantasy or science fiction, that has caught my eye, and that I think can be made to fit my game world.

This means that though I give the class advantages and disadvantages, whether or not it’s balanced against the other classes in the game isn’t really my top priority. The idea that all classes must be equal in effectiveness in all situations strikes me as bit creepily Marxist. I suppose it’s the spirit of the age infecting The Game. Though a PC is also a playing piece, I suppose the gamist point of view is not my primary one. It’s one of my assumptions that you play the game to simulate being a certain type of character and experience fantastic situations, more than to dominate or attempt to “win the game”. This may or may not be one assumption you share, but I expect good sportsmanship in my players and a co-operative spirit amongst them, as players if not as characters.

Any character class that leaves details open to interpretation, leaves them open to player abuse. That’s an acceptable risk to me as that’s something I can deal with. Openness in the rules is what makes them flexible enough to accommodate any eventuality. Bad faith players will face the iron gauntlet of retributive DM fiat. Like I’ve said, I was a ruthless min/maxer as a kid, but now I want a sense of immersion in the character and the world.

I don’t do voices though, and no singing.

In building a PC, I see two routes to creating an interesting character. You can go with the bare bones OD&D archetypal classes, fighter, Magic-user, cleric, and then create secondary rules to further flesh them out, or rely on negotiation between the player and the DM to determine what the PC can do, other than what is explicitly spelled out in the rules. This is the least restrictive and most free form method, at least as far as D&D goes.

I’m a Holmes/AD&D baby though, so I’m not adverse to skill systems like that introduced with the Thief class. I still think that role-playing by the players and description of the actions they want to perform and how, plus negotiation are the “best” way to run The Game, but, there will be times when it’s necessary to have a written skill system to fall back on. If the players encounter a problem they can’t solve that’s killing the game’s momentum and stalling play, if they are a shy or retiring group and don’t want to speak up, or the problem is trivial and holding up progress, I just default to rolling for it.

Just where it is on the character class creation scale that your preferences lie depends on your personal gaming philosophy and which edition of the rules formed the foundation of your assumptions about The Game. Of course, the edition you started with may not be the one you are philosophically predisposed to prefer. I think the rapid success and expansion of the OSR indicates that quite a few younger gamers are finding the earlier editions more to their taste than the newer ones. You don’t have to be old to be Old Guard.
Posted by E.G.Palmer at 7:33 PM

I prefer the second option, with the fall-back of, "well, roll against your [insert name of stat here] to see if you are successful."

In an attempt to expand classes, some settings make the identifying "flavor" a burden. I felt this in a campaign of Warhammer Fantasy, where my mercenary talent was with a 16' pike...no other pole-arm included. Ironically, this weapon was confiscated by city guards in the second session. I suppose the real problem was a DM in love with all the career minutia.

In my last Castles & Crusades game I broke rank on this entirely, by embracing a very non old school concept and allowed my players to create three Aspects (nicked this from the FATE system) for their character's background, and found it work wonderfully for further adding personal touches to existing character classes. I wrote up the rules I used for my game if you would like to take a look:

Upon first read I am sure the Aspect rules seem a tad bit "out there", especially if you have never played Fate. It took me spending about 20 minutes explaining it to my players before they grasped the concept. In game play it ran like a top, and it proved to add a level of customizations that my players loved.

I hope my responses to your Spy class didn't give you the idea I'm obsessed with balance. I'm not. If I was, I'd probably play 4e, not LL.

That said, unlike some other old schoolers (I don't mean anyone in particular here, just in general), I don't think 4e has some kind of monopoly on balance; and I do think that it's something worth thinking about.

I play with a wide range of people, all of whom I consider friends - and while they all want certain things out of the game, none of them want exactly the same things in exactly the same ways. One of them loves role playing; another loves combat. Combat lovers tend to min/max. That doesn't make them bad people or even bad gamers. They love the game as much as anybody. But just as I'm careful not to let the RPers make the entire campaign about diplomacy, I have to be careful not to let the combat lovers min/maxing get out of hand. Having reasonably balanced classes helps me do that.

That doesn't mean I think every class should perform the same in every situation, and I'm certainly not interested in running a "creepily Marxist" game.

No sweat,Nextautumn. I wasn't aiming this post at you, it was just that you, Zak, and Trollsmyth gave me some food for thought that was well worth chewing over.
MMMMMM, tasty thoughts.
I think it's helped me clairify some things that I had assumed with out bothering to define before.

P.S.Mangus, this is interesting, I'm gonna copy this for my mechanic folder. I like to try experimental one-off games with imported rules to see how The Game and the players react.
Honestly, most of the rules are of no concern to the my players, they just want to adventure, but I'll be interested to see what happens.
Blog discussion powers,activate!

I'm not a fan of the term Old School for new spins on old games, particularly if new design or rule ideas are a big factor in those games appeal (Swords & Wizardry, Mutant Future, etc)

I kind of like the term Old Guard though. :)

I agree, Stuart. I use the term Old School in converstation and posts since it's got traction and most people have an idea of what's meant by it.
I named the blog, Old Guard though because I like it better myself. There is room in the ranks for new recruits who have what it takes to be Old Guard.