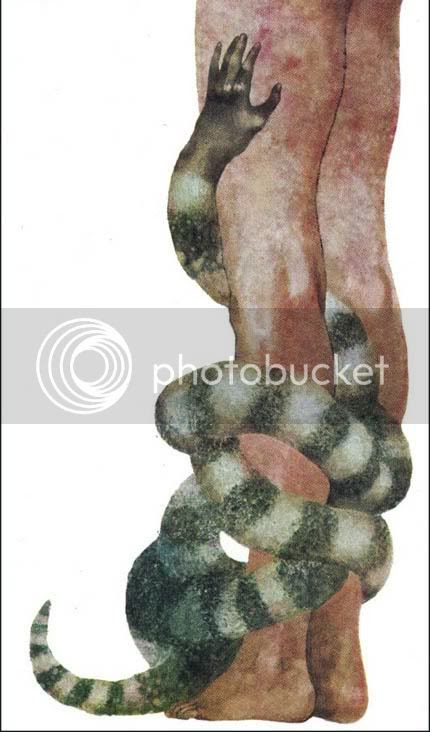 Handsnake.
Frequency: Very rare
No. appearing: 1-4, (most often singular)
Armor class: 5
Move: 8'
Hit dice: 2
% in lair: 20%
Treasure type: special
No. of attacks: 2
Damage/attack: 1-4, or by weapon
Special attacks: nil
Special defenses: nil
Magic resistance: 30%
Intelligence: Average, (10)
Alignment: Variable, roll for each individual, or DM choice.
Size: S, up to 8 feet long, up to 40 lbs
Psionic ability: nil
A Handsnake appears to be a large, heavy -bodied serpent, with a scaled human hand in place of a head.
The origin of these strange creatures is unknown, but presumed by interested parties to be magical.
Handsnakes are highly individual in temperament. They may be rude, humorous, cruel, lascivious, helpful, etc. An encounter with a handsnake may be either a boon, or a bane to a party, depending on how they handle the meeting.
A handsnake is intelligent, but having no mouth, cannot speak. Instead, they communicate with universally understood hand gestures, or, they may be taught to employ an actual sign language.
A handsnake may attack by coiling and striking as an adder would, but instead of biting with fangs, it will punch with it's fist, or attempt to blind by poking an attacker in the eyes.
A handsnake is capable of wielding a dagger, or hurling rocks, and it's strength in doing so is equal to an adult halfling.
Handsnakes are quirky in their motivations. They have been known to stealthily slither into campsites unnoticed and make off with odd items. Some have proven very friendly and given to offering unnerving handshakes to passers bye. One tale tells of a handsnake murdering a sleeping woman by coiling about her throat and griping its own body with it's hand until she was asphyxiated. Another story relates the actions of a handsnake known as the Insulting Serpent, which apparently made a habit of proffering rude gestures to travellers on the Hocknell road.
The Gold Miner, is the name given to a handsnake which seems to live near the gnome warrens of Gluraumgh. It is much despised for it's game of sneaking up on the unsuspecting and suddenly thrusting one of it fingers deep in the nose of it's victim.
A young handsnake, known as a fingerling, can be raised to be a henchman, or summoned to serve as a familiar. If well treated, they can be invaluable helping hands.
A handsnake does not eat as would a normal snake. It appears that they live by drawing off minute amounts of energy from both living things, and magic items.
Large animals, such as horses and cattle, are sought out by handsnakes as steady sources of sustenance. Despite their unnatural form, the presence of a handsnake is often accepted by these farm and draft animals as it will bring them apples or other treats, and thus win their favor.
A normal, healthy creature of a size larger than a rat will suffer no harm by the feeding of a handsnake, no more than it would by a normal snake seeking the heat of it's body. However, there could possibly be some danger to those gravely wounded, or very small creatures such as pixies or sprites.
Like wise, magic items which carry a permanent enchantment will not be harmed by a handsnakes energy basking. There is some small chance, (5%), that magic items which expend charges, such as wands, may be spontaneously drained by a handsnake.
There are stories, certainly spurious, which tell of monstrously huge handsnakes dwelling far to the south, in the reeking jungles of the equatorial region. These stories are of course, not true, however, if they were true, such a handsnake would be 30 to 60 feet in length, with a hand the size of a giants, and 6 hit dice. Luckily, there is no such thing as a Handaconda.
*The pic is a clip from a larger image by Brad Holland that Mr Door Tree put up on Golden Age Comic Book Stories last night. (link in my blog list)
Posted by E.G.Palmer at 6:53 PM

very nice, with some great amusing role playing potential - maybe you should submit this to the S&W miniature contest? (not sure if that's still open, but I know they extended the deadline as there were only about ten entries)..

Luckily, there is no such thing as a Handaconda.

Partial inspiration from China Mieville's Handlingers, or just too much Addams Family recently?

Ze Bulette, I thought I missed that contest, I'll check with Mythmere and see if it's still going on!

Chris, I love the Addams Family. I actually have a monster in the que based on a Addams cartoon.

As for Mieville, I'm afraid that if it wasn't for Noisms blog, I would't even know who he was. What's a Handlinger like?

Love it. Taking it.