Gyrgieno, the Black Charlatan. An NPC-antagonist to inflict on your players. 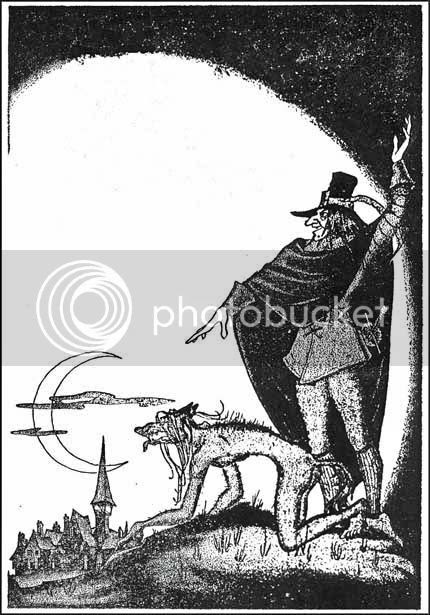 A gleeful murderer, a pitiless robber, a wine guzzler, a cad, and a ruiner of women, Gyrgieno the Black Charlatan is a thief of no small skill, and greater than average affinity for magic.
Though he hasn't enough talent to actually cast spells, he can decipher magical writings and utilize scrolls with only a 5% chance of failure, rather than the standard 25% chance of most other thieves.
Long, if unguided, study of pilfered tomes and alchemical manuals has allowed Gyrgieno to learn to compound weak potions of limited duration and effect.
His self-taught arcane dabblings are dangerous to the user, and unpredictable in effect, but, as he himself never imbibes his own experimental concoctions, but instead slyly administers them to unknowing dupes and pawns, his lack of procedural rigor concerns him not at all.

Gyrgieno often carries with him potions he has made, and will attempt to sell them to any who appear gullible enough to fall for his artful presentation.
On his person he currently carries, a potion of Haste, which will affect only one of the drinker's legs. Which will cause him to run in circles, or into walls. A potion of Growth which will affect only the drinker's head, causing it to grow to three times normal size. And a potion of Nightsight, which will give the drinker excellent night vision, but which does so by permanently transforming their eyeballs into fixed rod-shaped owl eyes. The drinker must then turn his head to see and can only perceive what he directly faces.

One potion which he does not sell is his favorite. He refers to it as, "the cur-bringer". This potion inflicts a weak form of were-wolfery upon the drinker. Upon the rising of the next crescent moon, the victim becomes a wretched, hairless wolf-man, totally under the control of Gyrgieno.
The Black Charlatan employs this potion in a particular manner. Frequenting taverns, inns, and bawdy halls, he begins conversations by asking for tales of adventure, and news of abroad of travelers and strangers. Once the conversation has gone on long enough for those present to have forgotten that he himself instigated it, Gyrgieno will tell a tale of the rumors he has heard concerning the fearsome werewolf bandits who have begun to prey on night travelers on the local roads. He will be most descriptive of the horrors visited upon the werewolves victims, and will relate the rumor that only by flinging to the lycanthropic robbers all valuables and fleeing in haste, might the worst be averted.
He will tell this story several days in a row to be sure the tale has made the rounds before he spikes the drink of a chosen pawn with the cur-bringer and waits for the crescent moon.

A potion-cur can do only 1-4 points of damage with bite or claw and attacks twice per round. The cur is armor class 9 and retains it's normal hit point total. In the thrall of the potion, the victim is unthinkingly obedient to Gyrgieno. The cur-bringer will work for one month only per dose. At sunrise, the cur reverts to normal form and is unaware of the night's events.

In the mean time, Gyrgieno will pick out likely targets, and when the chance arises, he will send the potion-cur to rob them, preferably on the road and alone. When confronted by the dread werewolf bandit, most victims flee in terror after throwing their gold to the ground. Should one find his spine and the potion-cur be slain, it is of no matter to Gyrgieno. New dupes can always be created.

Gyrgieno is tall, spare, hook-nosed, and lank-haired, but he is an engaging speaker. Bumpkins will think him well traveled, and the sophisticated will consider him harmless local color.
He is armed with a cut-and-thrust sword he calls Fortune Filch. The blade is +1 and on a hit it siphons luck from it's target and transfers it to it's wielder. This takes the form of a two point bonus for the wielder's next saving throw, and a two point penalty on the victim's next save. This can only happen once to a particular opponent per fight.

Gyrgieno will also carry, or have available to him, all the standard items which a thief may favor.

He will not engage in direct personal combat unless escape is impossible.


* This pic is by Boris Dolgov and from a 1947 issue of Weird Tales. Courtesy of Mr Door Tree at Golden Age Comic Book Stories.
Posted by E.G.Palmer at 6:32 PM