The Welwa, or, I frikken told you not to pick the Shalm cursed flowers! 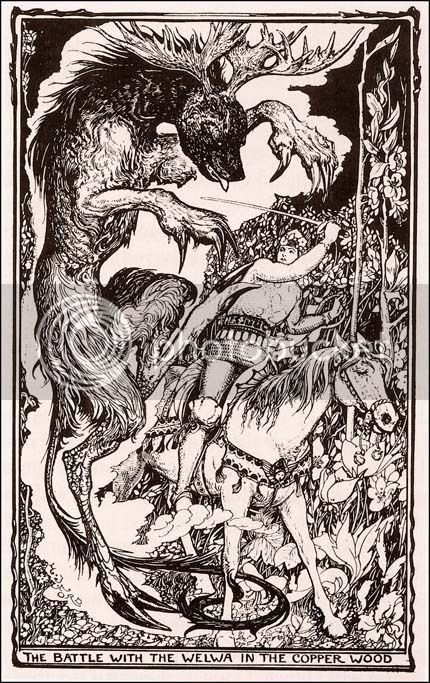 "She did not fly through the air, but neither did she walk upon the earth. She had a mane like a horse, horns like a deer, a face like a bear, eyes like a polecat; while her body had something of each. And that was the Welwa."

It is thought that the Welwa is possibly a form of, "Genius Loci", a spirit of place, which generates a physical form to defend is location. The Welwa may manifest in ancient locations of great natural beauty. Old forests, rivers, mountains, etc... Should the area be in some way threatened, the Welwa may appear to protect it.

The Welwa takes the form of a composite creature. Animals native to the area are merged into a single being which features the most powerful attributes of each. The Welwa is different every time it is manifest.

The Dungeon Master must generate it's statistics at each encounter. This is done by rolling on a random wilderness encounter table that is applicable to the environment of the area in question.
Six creatures must be chosen at random, disallowing those which are unnatural, or of greater than animal intelligence.

The Welwa will have hit dice equal to the total combined hit dice of all the creatures which were incorporated into it.

Each entry in the statistic column above which is listed as, "Variable", is chosen from the most advantageous choice possible considering the stats of the random creatures aggregated into each unique incarnation of the Welwa.

In an encounter, adventurers must defeat the Welwa, or flee from it. It cannot be charmed, held, or otherwise commanded or influenced as it is a force of nature. The Welwa will attack without pause, and it has no need to check morale. It will pursue to the natural boundry of it's generating area.

If the party will be passing through an area capable of manifesting the Welwa, and it seems likely that they may act in a way which will provoke the place's spirit, it is best to pregenerate the Welwa so as not to slow the game.

I took the idea for the Welwa from The Violet Fairy Book, which I found online at The Children's Nursery and it's Traditions. It's A nice site with many old, and out of copyright books of fairy tales digitized and scanned for the web. I love those gruesome old children's tales from before the helicopter parent appeared to insulate their precious snowflakes from any suggestion that the world did not love them.