I'm considering a new rule for combat, the Feint. 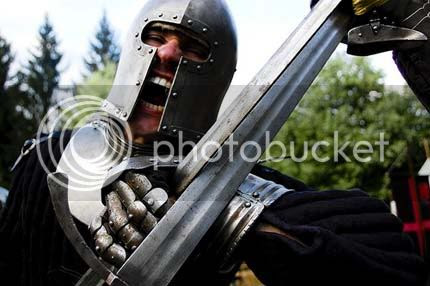 I'm referring to it as, the feint. It's abstract, of course, since this is Old Guard AD&D, and I'm often kind of vague myself. Maybe it's just the venom.

Anyway, in combat, the feint would be any sudden and unexpected action or move which throws the opponent off his stride. A feint may be a stop thrust, a hurled object, a kick in the crotch, even a sudden shout.
A feint is used to disengage from and escape an opponent the PC has decided is out of his league, or to buy time for others of his party to complete actions of their own.

To preform a feint, the PC must declare his intention to do so when his turn to act comes. The player must roll to hit normally, and if a hit is indicated, the feint has succeeded.
The opponent is surprised by the unforeseen move, and looses his action for that round.
The feinter may use the round to run away without fear of an attack as he retreats. He may use the round to attack again. Or he may use the round to preform any other action which he can accomplish in a single round.

The feint may only be used by fighters and thieves, and associated sub-classes.

The point of this would be to escape from a combat the PC cannot win, or to buy time for another PC to get off a spell, or slam a door, or stuff the halfling down the latrine, or whatever.

Do any of youse guys use a similar rule? How has it worked out for you? I don't have any newer edition stuff, so I don't know if they have a similar rule or not.

Yes, but I would impose a penalty to the normal attack (in my mechanic, a bonus to the enemy to detect the feint, as I don't put negatives on an acting party), and if the roll indicates success, the action goes as planned.

I'm glad to read your contemplating this option. I think it makes for richer and more varied combats. :)
--I look forward to hearing of its implementation.

hmmmm, a penalty to the 'to hit' number for the Feinter is probably a good idea. Maybe a -1 or -2, I run AD&D the way most people seem to expect OD&D to be. Fast and loose. I don't like to over mechanize things, yah know?
And yes, I'm much less poisoned today. I did manage to get bitten by a horsefly though.

You know, as I read this , the only thing I could think of is where Inigo Montoya confronts the bad guy in THE PRINCESS BRIDE, and he performs a feint.... by dropping his rapier and running away. 8)