The Dretching Bucket, or, Pholtus burn it! What is that stink?! 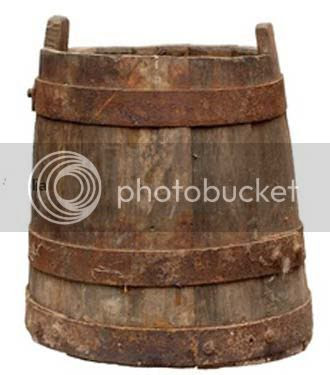 The Dretching Bucket appears to be a filth-encrusted wooden bucket filled with vile, scummy water. Careful inspection may reveal the sigals and symbols, crafted of strips of human bone, inset within and without the bucket. The layers of grime obscure them from any cursory inspection.

Should the bucket be overturned, and it's contents sloshed out upon the ground, the stinking liquid will form an 8'x8' pool. This puddle is actually a gate to distant infernal regions, and 1d6 Dretch will immediately clamber up and out of the pool and attack any and all persons present. The bucket spiller included.

The wretched little demons will fight with great gusto, only fleeing if two thirds of their numbers have been slain. Any that escape will shadow the party, looking for a chance to murder and devour them when they are at some disadvantage.

The Dretching Bucket was created by the slave-mage Arhmvexoos. Tasked to improve and repair the sewers of the Lesser Capitol of the Ancient Empire, Arhmvexoos caused all of the many miles of cess-tunnels to drain into a planar gate which he created and connected to the Abyss. As he was constrained, and forced to work his magic against his will, the bitter wizard expended no great effort to ensure that the drain-gate functioned in one direction only.

This, of course, resulted in the infamous Night of Ordure and Brimstone, about which it is forbidden to speak. No more here shall be written on that fell and odorous happening.

Soldiery of the Empire, sent to arrest Arhmvexoos at his prison-keep, were the first to encounter the Dretching Bucket as they searched the catacombs beneath the extrospectium. The bucket had been left balanced atop a door left ajar. It would have seemed the sort of joke which some yokel country jester might play, had the spilling of the bucket not resulted in the death of the famous Sword-Leader Yrflrr and a dozen of his Ironcoats. Those who knew the truth behind the mask of stalwart heroism which hid the true character of Yrflrr still found much humor in the last filthy joke of Arhmvexoos.

You're just lucky I didn't include the Mop of Foul Spattering!

the infamous Night of Ordure and Brimstone

Nice play on the 'demon as excremental' schtick. This is getting nicked. :)