Cobblestone Fae; The Gutter Faeries and Shite Gnomes of the City.

As I have described previously, the Arcane Law of Spontaneous Generation holds sway over life in Wyrd-Greyhawk, ruling over its poor cousin, evolution. The currents of aeldritch force which so mysteriously swirl and flow about the Oerth cause nature to vomit forth new and exotic forms of life with reckless abandon. Living things touched by magic may adapt to changing conditions with extraordinary speed. The majority of such creatures are singular and short-lived; some however, survive to found new species or races, for good or ill.

As areas of the Flanaess have come under the control of ever self centered and industrious mankind, the various sorts of petty faeries and little peoples indigenous to the land have adapted to live alongside man in his cities of stone and iron.

This is the origin of the manifold troublous little beings prosaically referred to as Gutter Faeries and Shite Gnomes. These appellations consider a wide variety of generally human-like creatures which fall into two broad catagories. The gutter faeries usually, but not always, being winged, and smaller than the shite gnomes, anywhere from two fingers in height to nearly a foot. The gnomes, not to be confused with the hill dwelling gnome race, range in height from a hand tall to as much as a foot and a half.

These creatures have been altered by the will of Mother Oerth to live with ease in alley, shingle, ditch and midden, rather than glade, grove, valley and river. Greatly influenced in character and appearance by the human cultures they dwell amongst, the gnomes and faeries of the cities vary in temperament and form from community to community, and even street by street. The dispositions of the human inhabitants are reflected in the traits displayed by the cobblestone fae.

In Chendyl the little beings are inoffensive, helpful even, though so unobtrusive as to be nearly forgotten. In less benign places, they become so as well. In Molag they are an ineradicable, though most deserved pox. The actions of the little creatures are shaped a great deal by the attitudes of the human city dwellers that surround them. In some places the tiny beings are nearly considered equal citizens, in others, the most pestiferous sort of vermin. The majority fall somewhere in between.

The little peoples of the cities find work and places for themselves as suits their varying natures. Often gutter faeries act as messengers for those able to deal with them. They may also be tasked to guard town gardens and orchards from birds and insects. They may also serve as spies and gatherers of news.

In each city in which they exist, cobblestone fae adapt in a way unique to their surroundings. In Curleem, famous for its ironworks, shite gnomes bear spikes of iron similar to the thorns of a fey bramble, but appearing as iron nails.

In Lurgn, travelers come to see the famous tumbling gnomes. The miniature acrobats perform for food and drink for any who pay them heed. Forming hoops of living gnomes, they roll down streets and between the legs astounded visitors. The manuver known as the Tower of Shite is the greatest crowd pleaser in the gnomes repertoire. Dozens of shite gnomes interlock their bodies to form a single man-shaped unit of a size equal to that of a Halfling. In this arrangement, they do battle with other shite towers, or drunken Halflings, to the raucous acclaim of the mob.

In the city gardens of Colomg, the sibilant singing and living lights of the fire faeries is likewise an attraction to visitors. Poaching of the faeries is strictly forbidden and cruelly punished. Thieves who are caught will lose the middle finger of their right hand. Guardsmen armed with man-catchers and finger-nips are always present in the gardens.

Those cobblestone fae unable to find work which allows them to mimic the doings of the larger folk become scavengers, gleaners, opportunists and thieves, gaining their livelihood from the city as foresters do the woods. 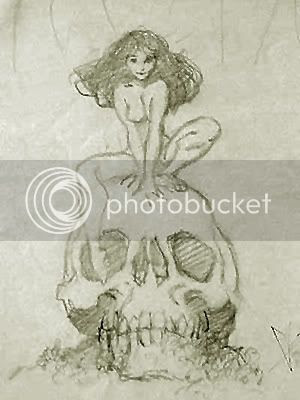 The gutter faeries of the city of Selm, in southern Ket, are wingless and appear as tiny, gorgeous women. They are enchanting beings, graceful in form and movement, with voices sweet as songbirds. As they do in all cities, the gutter faeries of Selm have adapted to play a role in the life of their city.

Selm is dominated by the temples of Mhyriss handmaiden of the Reaper, a goddess of love, beauty and death. The dead of the city are placed upon byres within the temples, and when night falls, numbers of the beautiful little cannibals come forth from their hiding places and devour the flesh of the bodies. In the morning, their spotless bones are engraved with prayer runes by the priests, later to be made into votive rattles for sale in the temples.

The gutter faeries of Selm are otherwise completely harmless and incapable of defending themselves.

In less reputable taverns, gutter faeries with bound wings and armed with needles may be forced to do mortal combat with starving rats for the betting pleasure of drunken patrons. Street vendors selling pasties and meat pies may claim to be serving fowl flesh, but gutter faeries cost nothing to he who has a bird net.

Shite gnomes commonly serve by clearing the streets of offal and manure, thus the origin of the name. Generally when this is the case, the gnomes are paid in small beer for their labor. They drink themselves stuporous each day, only to awaken at nightfall to again clear the cobbles of horse droppings and garbage. So long as the drink is forthcoming, the gnomes may be quite industrious. Deprived of their expected reward, however, they can become spiteful vandals and a problem worse than rats.

In some cities, the Gnome-gigger is more popular and better paid than the rat-catcher. Of note, Bekul the gnome spitter, late of Rel Mord, was known for his troupe of tame shite gnomes, which he had trained to be assassins of their own kind. His death, he was discovered with his head stuck in a chamber pot, suffocated, was cause for much mourning amongst the gnome troubled. 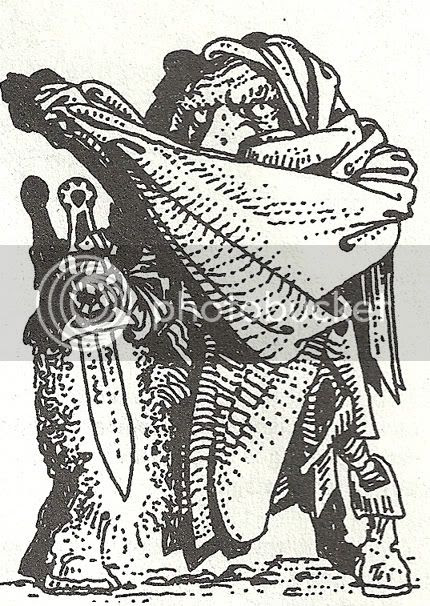 Some tales connect the fate of Bekul with the stories of one of the very few shite gnomes to achieve fame, or rather infamy, the dreaded Gnobbles the Snout-knocker.
A perverse creature whose elusiveness allowed his reign of terror to last for eight sleepless months, the shite gnome was a despicable villain, a thief and murderer. These ordinary crimes paled in comparison to Gnobbles especial peccadillo, the nasal rape of unconscious inebriates.

The sale of intoxicants all but ceased due to the Snout-Knocker’s nocturnal transgressions. None dared to indulge in drink, smoke, or sparkling powder for fear of falling victim to the miniscule violator of noses.

Of course, this greatly discommoded the thieves’ guild. Their profits were much reduced. While the Baron’s men had been unable to capture the demented little manikin, the Guild knows failure not at all. With the bait of a soused barmaid, and a brace of feisty terriers, Gnobbles the shite gnome met his messy end.

The cobblestone fae are those creatures of faerie which have adapted o live amongst mankind within their cities of stone, brick and bronze. In the eyes of many, they are less than their sylvan kin, sad, degenerate creatures in unnatural circumstances. Others consider them civilized examples for their wild cousins.

Extremely variable in form and appearance, they are commonly split into two categories, the gutter faeries and the shite gnomes. Broadly, Gutter faeries are smaller, winged and comely, while shite gnomes are larger, crude in word and deed and quite unattractive. This is a generalization as there is much overlap between the two types.

Both gutter faeries and shite gnomes may possess variations on any special defenses or other abilities displayed by their wild and uncivilized relatives. Most commonly shite gnomes have the ability to pass through any crack in any surface, like a wall or street, regardless of its size. Gutter faeries often possess the power of at will invisibility. Both types commonly have the ability to speak with rats, roaches, and pigeons.

*The first pic is a Frazetta sketch, most likely from a convention. I probably found it at Comic Art Fans.
The second is Russ Nicholson's Fiend Folio illustration for the Dark Creeper entry. I think Russ's work really made the Fiend Folio. I thought it was the perfect illo for the dreaded Gnobbles. Sleep tight.
Posted by E.G.Palmer at 9:45 AM

"the nasal rape of unconscious inebriates."
Snout-Knocker just became a feared villain in my campaign. very funny and cool.

What happens if they sneeze?

DM : "You awake the morning after your night of celebratory carousing.
Dave, your fighter, Rauthgyr, has a splitting headache, and your nose is sore. You also seem to have some,...sinus congestion."

Player : "I must be catching a cold from all that hard partying."

Brilliant. I've found the niche for gnomes in future game worlds, I think.

Shite-gnomes all the way! I read The Ghost Map a couple years ago and there's a fascinating chapter on "'pure' collectors" and "night soil men"--I'm picturing shite gnomes as Victorian street urchins, with filthy waist coats and tattered top hats. I'll probably reference my copy of GURPS Goblins for further inspiration.