Ewart Oakeshott assures me that variable weapon damage is ok. 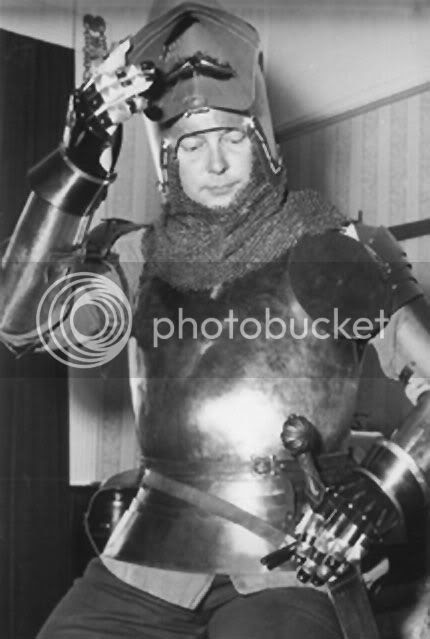 Ewart Oakeshott, 1916-2002 was and is one of my favorite authorities on the medieval sword. It was Oakeshotts sword typology which really made clear to me the great variety of design and purpose of medieval European swords.

It was Oakeshott who refocused the attention of academia and collectors on the blade itself, instead of merely the swords furniture. Previous studies of swords tended to pay more attention to guards, hilts,and pommels than they did to the blade.
The blade is the sword, however. Oakeshott recognized the sword as a tool designed to perform a function, rather than a totem of war, or a ceremonial showpiece.

Oakeshott's typology concerns the blades shape, length, cross section, and structural design, and groups blades in families of related designs that show how the weapons evolved to overcome the improving defences they faced.
There has always been an arms race, it just used to be slower and more subtle.

Modern sensibilities tend to focus on the flashy weapons of kings and princes. Gold plated hilts and gem stone pommels are what you see in movies and fantasy art, along with ridiculously huge blades with extraneous flairs and curves that no man could actually lift, let alone use in melee.
That sort of thing disrupts my belief in the game world. I haven't any problem accepting a thousand pound, fire-breathing reptilian monster in a fantasy world. I suppose that's because it's not really much of a jump from dinosaurs to dragons.
A twenty pound sword however, makes me roll my eyes. I split alot of wood, with a 6 pound maul and a double bit axe. I play around some with the swords in my own collection, the largest of which is just over 4 pounds, and a two-hander. Actually using anything that weighs more than 4 pounds in melee combat is beyond the capabilities of most humans.

A melee weapon will be as heavy as it must to perform it's function, and no heavier. Speed in combat is more telling than force, and if you use a weapon that is so large it slows your attack, you will be killed by the guy who uses a less clumsy and faster killing tool. 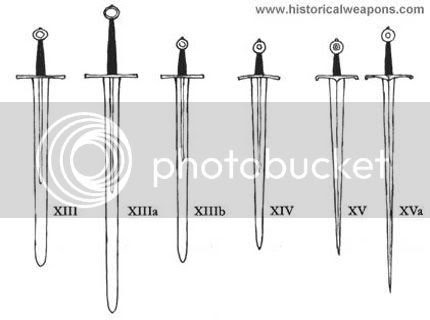 So much for the real world.

In the Original Edition of The Game all weapons did D6 damage and many aficionados of OD&D and it's retro-clone, Swords&Wizardry use this system. It's fast, and straight forward and streamlines combat to keep the action moving quickly. From the stand point of game rules, it's eminently sensible and is in keeping with the Old School philosophy of rules light gaming.

These are all things I'm in favor of, but I'm an AD&D guy at heart, and I have no problem with variable weapon damage. I prefer the idea in fact. I'm willing to spend the extra few seconds to check a weapons damage rating if I don't already know it.

In an ideal situation, a dagger can kill as easily as a two handed sword, certainly. A single deep thrust from a six inch blade will let the life out of an opponent as surely as would loosing their head to the mighty swing of a four foot blade.

This ideal situation is something that almost never occurs in life though. If you were in a actual melee situation, I think I'm safe in assuming you'd rather be the one with the two handed sword and not the guy with the dagger. This is what I think the variable weapon damage accurately reflects.

Since AD&D/OD&D combat is abstract in nature, the difference in weapon damage is the difference in the potential harm the weapon can cause. Either the dagger doing d4 damage, or the two-handed sword doing 1d10 damage could kill with one blow, but the sword is more likely to do so.

At least at low level, where The Game is most true to life. I've only once had a character make it past 10th level myself. I just prefer low level gaming, it's more thrilling I think. 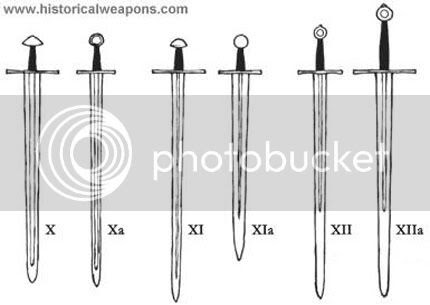 I've pasted in a few illustrations of portions of Oakeshott's sword typology from historicalweapons.com. These are just a few of the types covered in the full typology. There are sub-types within most categories. The typology covers viking age to renaissance sword types. 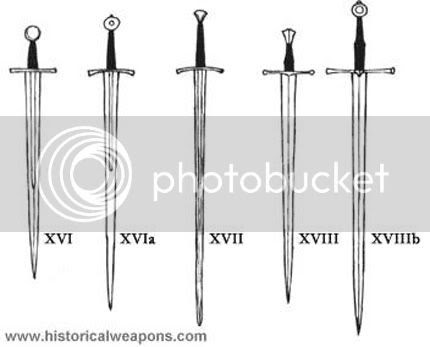 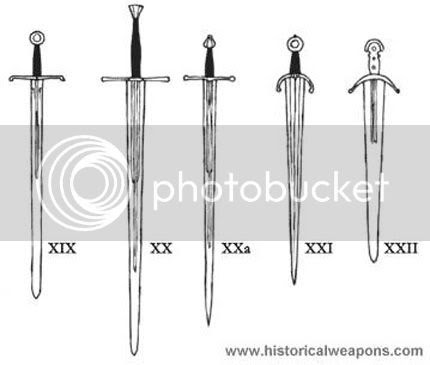 For some reason I don't understand, blogger is not allowing me to cut and paste links tonight.

So, you'll have to type these in for yourself if you would like to read more on the web about Ewart Oakeshott and his work.

myarmory.com has and excellent bio of the man, and a type by type example of the swords that make up the typology. There is also a wealth of other arms and armor related information if you're like me, a DM who dwells on that sort of thing.

oakeshott.org will take you to the Oakeshott Institute. The Institute houses Oakeshott's own sword collection and works to expand on his research.
Posted by E.G.Palmer at 2:24 PM

Thanks for the links - never heard of Mr. Oakeshott before, looking forward to some reading! I'm more inclined to variable damage, though I respect the principles people are striving for with d6 across the board, and admire the elegance of its simplest variations. But I like different damage for S-M and L darn it!

Weapon weight is another issue though, but weight systems, encumbrance, etc - I tend to convert everything to weights and scales I'm familiar with instead.

Oh, man, what a terrific name for an expert on swords and medieval weaponry!

Have you ever read "The Sword in Anglo-Saxon England" by H.R. Ellis-Davidson? It makes a compelling case for the idea that there was more to the sword than just utilitarian "how do I kill you faster".

That might have been true with the development of individual sword *types*, but the sword as a *concept* had a significance that was religious and emotional as well.

And I couldn't agree more about the whole trend of fantasy swords to have ridiculous swoops and curls, and being 9' long in scale, and such. Utter nonsense. But as you say, a fire-breathing dragon I can accept...

Yeah, it is a great name,isn't it? I think the next time I roll up a paladin, I'm going to call him Sir Ewart Oakeshott.

You know, Ragorakk, I always thought the S/M/L damage ratings should be the reverse of what the Player's Handbook lists. Not in all cases, but alot of them. It makes more sense to me that a large creature would take less damage from a given weapon, and not more.
What do you think?

I do also see the concept of the sword as metaphor, Joe. I'm pretty steeped in mythology myself. I'm more than a little tainted by engineering attitudes though, so I tend to look at the design of the thing first.
I hadn't read Ellis-Davidson, do you think it's on gutenberg yet?

Still, a swept hilt cut and thrust rapier and a nice main gauche are my ideal fantasy weapons for that late Re/early Enlightenment-era weapon, whereas a basketed hilt broadsword is my goto choice for later period (Jacobian revolt) swords. Prior to that, some sort of macha/ma'ka or likesame short-sword would be my choice. :D

I think weapon type vs. armor type just isn't worthwhile. I just can't reason out why weapons would be so wildly different in effectiveness just because the person has Scale instead of Splint. And in a game sense, you'd need to look at a table and apply an extra modifier every time you attacked. That slows down the game.

Variable weapon damage does make sense, but swords get too much love in 2E. A mace or spear should do more damage, but have other qualities that the sword lacks.

I'd love it if a team of historians, forensic scientists, meatpackers, and weaponsmiths got together to write a definitive treatise on the comparable effectiveness of various weapons on various targets, in various circumstances, including armor, internal injuries, etc. It would put a stop to a lot of our conjecture and confusion.

After perusing myarmory.com a few months back, I posted about construction details for a sword. I liked the idea of a player customizing his weapon at the smithy...
http://ghosttower.crithitcomics.com/drawings/3-uncategorized/84-morel-about-that-10gp-sword.html

@1d30: "I'd love it if a team of historians, forensic scientists, meatpackers, and weaponsmiths got together to write a definitive treatise on the comparable effectiveness of various weapons on various targets, in various circumstances, including armor, internal injuries, etc. It would put a stop to a lot of our conjecture and confusion."

One may think it would, but after extensive gelatin (+ clothing) ballistics (firearms) testing by various experts, there is still no consensus on which calibres and grain-weights of said calibres are most effective man-stoppers under all circumstances and ranges.
--I imagine that much the same would apply to hand weapons as well.

I reckon perusal of various websites whre people have post cutting tests with various different weapons and against various different armours (e.g. myarmoury.com), as well as perusal of websites where historical info about weapon effectiveness, wounding, the whole reach/speed issue etc. (e.g. thearma.com) would immediately deepen most gamers understanding of the issues at stake here.

Strangely enough, aside from weapon speeds as they stand, I think D&D does a good job.

Yeah - I can see the argument for that, though only in a few cases had that crossed my mind to do. In general, I guess I assumed that smaller creatures would be forced to move with the blow more than a large creature would - the force of the impact would be mitigated by the 'lack of mass'. A rationalization, to be sure - and I think flipping the values (in many cases) makes sense too - smaller creatures receive MORE damage because damage is more meaningfulful (when there's less mass...

In the end, I re-did the damage charts to suit my tastes and most weapons keep the same die vs S/M and L - only larger & 2 handed weapons get much modification.