What you need is a good night's sleep. 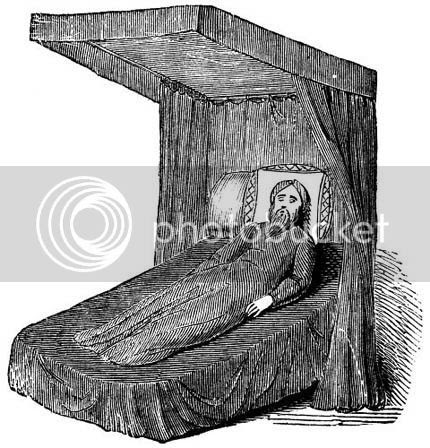 Much concerned with the arcane science of prophetic dream and soporic augury, Somnour the Dossarde had constructed for his own use, this bedstead of the finest craftsmanship and materials. He then laid upon it many subtle charms and magniks whereby he increased both the power of his dream magic, and the clarity of his nocturnal vagaries.

The greater part of Somnour's magic, including his book, the Incunabulum Noctum of dream spells and the Phantastic Bedclothes, as well as the Comforting Blankets, and the Abjurative Sheet, were all lost in the unexplained planar disjunction which rolled across the Bleak March forty years in the past.

Only the Restful Bed is known for certain to have survived that woeful occurrence. It had been disassembled and packed for it's relocation to Somnour's new summer tower, and was three leagues to the south on the Borlem road when the Disjunction transfigured the pine barrens of the Bleak March.

Magic-users and Clerics who cast divinitory magic just before falling asleep in the Restful Bed will have the power and clarity of their magic augmented by the enchantments of the bed.

Spells such as Augury, Divination,and Commune, will act as though cast by a cleric of three levels of experience higher. Locate Object and Find the Path will result in the asked for knowledge coming to the caster in a dream. Range limits are disregarded.

Magic-user spells are similarly enhanced by the magic of the Restful Bed. Comprehend Languages will be made permanent by the bed. Message will send the magic-users thoughts to any other sleeping person. A magic-user who casts Sleep on himself while lying in the Restful Bed will arise after eight hours with no further need of sleep for three days per level. Esp will allow the caster to witness the dreams of others who sleep within one mile of the bed. Clairaudiance and Clairvoyance convey their information in a dream state and without range limits.

The Dungeon Master may rule on in what way similar magics will be affected by the power of the Restful Bed.

Those who have been wounded will heal at thrice the normal rate so long as they sleep in the bed.

Characters of any class who have been confounded by a conundrum of any sort, may "sleep on it", upon the Restful Bed. Those who roll equal to, or below their Wisdom score on a d20, will awake with new insight into the problem. The Dungeon Master is free to offer however much of the solution to the PC's problem that he sees fit.

When the Restful Bed is found, it may have either been reassembled in a new location, or else, it remains disassembled in it's traveling crate. The bed must be complete and correctly assembled to function. It consists of a foot board, head board, side rails, rope netting, mattress, canopy, and shroud. No part of the bed may be missing or damaged for it to work it's dream magic.

Man - that is just TOO GOOD!

And this is why Gene is a preferred designer for us as well. Great imagination. Great item, Gene--RJK